I have had an extremely busy and stimulating school year, not only due to having to prepare and deliver lessons, organizing the curriculum and my role as subject leader for language and literature, but also because of some very interesting teacher training courses I attended throughout the year. I was in Cardiff at the IBO centre (I spoke briefly about it in my October half-term 2015 piece), in Qatar and in Oxford.

In January I went to Doha for three days at the International sister school of the school where I currently work in Surrey. It was a fantastic experience. The course was engrossing, I learned more about curriculum planning and shared ideas with the language colleagues who taught there.
Doha is a very nice city. Kausar, the Maths teacher who hosted me, took me sightseeing and told me everything she knew about the country. It is rich thanks to oil and gas resources which allowed incredible growth and development in only fifty years. Doha looks tidy, well organized, with a good balance of old and new. There were clear skies and sunny weather even in winter and I enjoyed beautiful light displays at night. In the centre the roads are wide and new buildings are rising everywhere.

We went on a boat cruise on the first night on a typical dhow and could admire the amazing skyline with shining skyscrapers and a mesmerizing plays of lights. The most important city landmarks are the Islamic cultural centre, with its spiraled tower, and the museum of Islamic arts, whose central tower windows are shaped like the eyes of an Arab woman wearing a Niqab.

The most characteristic place to visit in Doha is the Souq, or market. I was there twice with Kausar who kindly helped me buy fabrics and pearls for me and my daughters. It is a covered market with small shops packed with local products: spices, food, animals and fabrics. 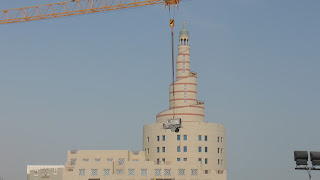 Everything is colourful, special, easy-going and surprisingly safe. The majority of the people there were families shopping, men in long white tunics and elegant Arab headgears and women usually wearing black chador, their features nicely enhanced with makeup. The children looked like any other children around the world, lively and curious, wearing the same kind of clothes and playing with the same toys of western children.

We also visited the Islamic centre where I could attend a prayer in the women’s upper section and collect some booklets that explained what Islam is and its connections with Christianity and the Bible. It’s always interesting to read about other religions and though I am not an expert, it made me understand Arab culture better. My superficial first impression about Islam is of a very traditional religion with a belief in a powerful God, so mighty that people can’t represent or name him. He is very similar to the God of the Old Testament and different from the Christian God who is incarnated in Jesus Christ.

The museum of Islamic art was superb. The edifice in itself is a masterpiece, designed by I.M. Pei and completed in 2008. There was an exhibition on The Hunt with rich displays of pictures, textiles, tools, pottery, weapons and rings linked to deer and falcon hunting. It was a princely activity, as in Europe, a sport for the aristocrats. There was also a digital book and a cartoon, telling the story of two princes who happen to kill the same deer and end declaring war with each other. 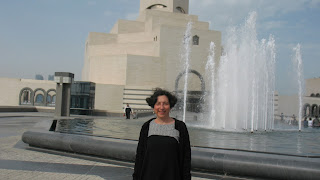 The museum collection is outstanding, there are beautiful examples of Islamic art from all over the Islamic world, which stretched from Sicily and Spain in the west to Iran, central Asia and India in the East. Decorations are mostly made with geometric patterns inspired by plants and flowers repeated in clever intricate designs that remind of abstract shapes. Calligraphy is another important artistic form present at the museum, writing and praying are joined to a high spiritual and artistic level. The astrolabes were among my favourite pieces, they testify the great achievements of Arab science and collaboration among scientists in Eastern and Western worlds, be they Christian, Muslims, Jews, or Buddhists. Links and exchanges between East and West have been happening since the Middle Ages not only for trades but also for shared cultural interests in sciences, like astronomy, medicine, chemistry, mathematics, botanic and people’s lifestyles in general.

At the museum there was also an exhibition on women during the Qajar dynasty of Iran, with artworks showing their daily life, an interesting glimpse of a different ideal of female beauty where women were depicted with one eyebrow, sort of Frida Kahlo style.
Flying back home I couldn’t help watching the Christmas Special Bake Off and took notes of appetizing saffron buns and a special cheesecake with white chocolate and stem ginger, which I tried to recreate as soon as I arrived home in celebration of my eldest son’s engagement.

My last course for this school year was at Queen’s College in Oxford. I was lucky to meet so many interesting people from all over Europe and share with them my experience and understanding of the Diploma Program for literature. Being at Queen’s was such a pleasure, it’s a unique beautiful place that embodies all the charm of Oxford. We had a wonderful time during the course and after it, as we dined  in an truly original restaurant called The Handle Bar surrounded by all kinds of bicycles.
Unfortunately it was also a sad time as my father started to get sick during that same week, so I had to rush home first and then to Italy to be with him.

Posted by http://carlascarano.blogspot.co.uk/ at 02:19 No comments:

I have gone through a tough period recently. My father died about a month ago after being diagnosed with cancer of the pancreas. His last weeks were very painful and I tried to be near him as much as possible. My mum is now living with me in Surrey. She had a difficult time as well and is still emotionally fragile, which is understandable. We are spending much of our time shopping and cooking. She is a great cook and her dishes are simple but very tasty. 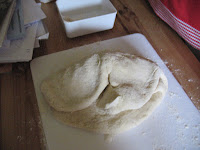 Here is a recipe for homemade gnocchi, we have just tried them at home and they were delicious. 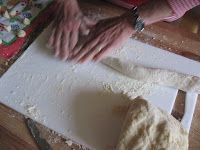 Boil the potatoes in salted  water. When they are ready (they need to be smooth when you test them with a skewer or a fork), put them in cold water and peel them. Mash the potatoes in a large bowl using a potato masher, then add the flour little by little and the eggs. Mix it well using your hands till you have a smooth dough. Knead it on a floured work surface for a few minutes, it should not be sticky. 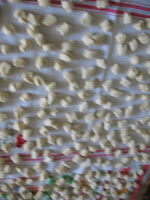 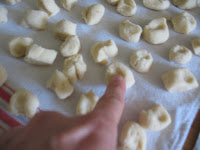 Roll pieces of dough into long sausages and cut one inch pieces. Scatter the gnocchi on a tea towel as you go along. Finally slightly press each piece in the middle of the gnocchi with a finger, forming a dimple in the middle (this is to allow the sauce to be absorbed better).

Cook the gnocchi in salted boiling water, they are ready when they float to the top. Drain the gnocchi and serve them with tomato sauce and plenty of parmigiano. 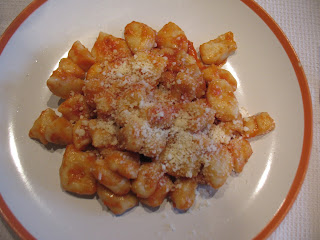 Posted by http://carlascarano.blogspot.co.uk/ at 14:11 No comments: