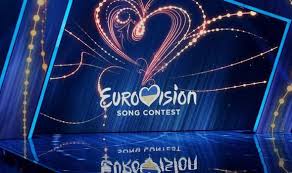 When May approaches my fingers tingle in anticipation to the Eurovision Song contest and I can’t help writing about it. I reviewed it in the past years as well, promoting the Italian songs, of course. My articles are here:

Though I shamelessly support the Italian song with all my heart, I am aware there are other

exceptional pieces this year; it will be a tough competition indeed. Among the big five, a part from Italy which is my top one by default, I also like France and Spain. Bilal Hassani, representing France with ‘Roi’ (king), might repeat Conchita Wurst’s successful performance in 2014. He is a queerman reflecting his experience in the song’s impressive story and involving music. He cleverly mixes French and English in the lyrics with a revealing effect. I especially like:

The Spanish song,‘La Venda’ by Niki, is catchy and entertaining; it gives you summer fever and a few interesting tips to think about:

I like the UK song too, the message is great and the story is moving. I hope it will make the left hand side of the leaderboard this time.

The other song that engages me is ‘Chameleon’ by Michela (Malta). It’s the rhythm that takes me but not just this. Being a chameleon in ‘technicolour’ can be resourceful, a way to survive. I also enjoyed ‘Say Na Na Na’ by Serhat (San Marino). Don’t ask me why, I know the lines are repetitive, maybe a bit plain, but I enjoy the rhythm. It makes my feet move and gives me joy with a simple message, no nuances. Sometimes that’s all we need.

It seems the Netherlands and Sweden are among the favourites. Honestly, I don’t feel their songs are so engaging, but who knows, there are always revelations at the Eurovision Song contest. In the semi finals, the prettiest one was Australia swinging on a pole and singing Opera. The weirdest one was Portugal wearing a plastic beard and, unsurprisingly, he didn’t pass the round. Other highlights were Austria’s electric blue hair, which didn’t grant her a place in the final though, the stunning Albania’s black and golden outfit and Denmark’s understated sweet song. 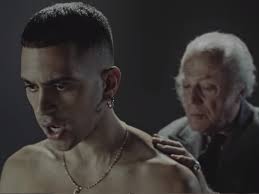 relationship with his father. Alessandro Mahmoud is a young Italian singer-songwriter who won the Sanremo Music Festival 2019. He is from Milan born from an Italian mother and an Egyptian father, who divorced when he was a little child. His stage name, Mahmood, refers to his Arabic origin and to the English expression ‘my mood’, which reveals his strong determination to succeed. There is a moving line in Arabic in ‘Soldi’: Waladi waladi habibi ta’aleena (my son, my son, darling, come over here) as well as references to Ramadan. Though Mahmood doesn’t speak Arabic (Italian and his mother’s Sardinian dialect are his mother tongues) his personality testifies cultural integration and talented diversity. His experience as a child raised up by the mother comes up in ‘Soldi’ in which money is an important issue that affects relationships, mainly the relationship with his almost absent father. Love and care seem to depend only on money, mingled with lost pride and a deep sense of betrayal. Here are the lyrics: 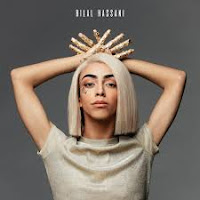 and here are some more tips about Mahmood:
https://wiwibloggs.com/2019/04/17/mahmood-10-facts-about-italys-eurovision-2019-singer/

The song has an engaging rap rhythm insisting on the ‘hook’ soldi, and pop music connotations. The tone and the mood of the song are appropriate to the emotional story told with disenchantment and participation. I think I will vote for it, though’ Roi’ is in my heart too.

Posted by http://carlascarano.blogspot.co.uk/ at 10:33 No comments:

I find the time preceding Easter Sunday an uneasy time. It might be Lent with its fasting and holding back, or the holy week recalling the Passion of Jesus that resounds of deceit and misunderstandings, though it ends with a sense of rebirth. After my holiday in Japan at the beginning of April, I felt full of hope influenced by its tolerant religious culture and boosted by all the wishes and offerings I had made at Shinto and Buddhist temples. In Rome I had a bit of hard time with my mother. She will be eighty-nine in May and is becoming more and more forgetful. This affects her everyday life as she forgets appointments, where she stores or puts things and how she spends her money. It annoys her, of course, and has consequences on her mood.

According to the Italian law, kin need to provide care directly or paying for a carer. At the same time, you cannot force the elderly person to accept a carer or any other arrangement if they do not agree. I spoke with my mother’s GP who suggested her to move to one of her daughters’ house or live in a separate apartment near them. But she doesn’t accept the idea of leaving her home and we cannot force her. In the meantime, she had also some disagreements with the lady who was helping her in her chores and shopping since last September and decided to dismiss her. My sister and I had to find another carer in a hurry as the doctor said she couldn’t be alone after my departure for England. In Italy most of the carers employed for elderly and disabled people come from Eastern Europe and the Philippines. Luckily we found a lady from Moldova who can stay with my mum night and day for the next three months. I also took her to some hospital appointments and she was assessed by a geriatric doctor.

Becoming aware of being less independent can make my mother bad-tempered, sometimes angry and this affects our relationship. Luckily my sister, who lives near Rome, is helping. Nevertheless, my mum and I managed to spend some good time together seeing friends and relatives, visiting exhibitions and baking cakes and biscuits. We celebrated Palm Sunday at Villa Malta, meditating on the Passion according to St. Luke. It was intriguing and interesting to rediscover in the ancient text, the oldest of the Gospel and the core of it, the almost cruel and apparently illogic way God chose to save his people. Pain and treason seem to overcome rationality in the torture and death of the innocent Jesus. If we believe in resurrection, the broken bread is finally transformed in life again, defeat becomes victory and the sacrifice saves mankind conquering death. However, I feel that the ruthlessness of the sacrifice, which is cruelly and bloodily perpetrated, lingers like a dark impenetrable shadow on the whole story. 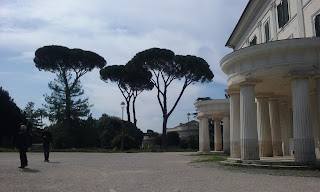 My mum and I visited two exhibitions, Il Mito Rivisitato: le maschere arcaiche della Basilicata (the revisited myth: archaic masks of Balilicata) at Casina delle Civette in Villa Torlonia, and Donne, Corpo e Immagine, tra Simbolo e Rivoluzione (women, body and image, between symbol and revolution) at the Gallery of Modern Art of the Municipality of Rome. They were two riveting exhibitions I reviewed for London Grip, you can find them here:

Easter Sunday was a great family gathering. We had delicious food cooked by my mother in law: her special ravioli, then lamb, artichokes and fine beans. For dessert we had pastiera and strawberries. At night we flew back to England looking forward to starting our routines again.

Posted by http://carlascarano.blogspot.co.uk/ at 00:23 No comments: