Attending art exhibitions and visiting museums are two of my favourite pastimes; when I have time, I also write the reviews.

You can find my art reviews here:

Impressionism: The Art of Life: https://wokingwriters.wordpress.com/2018/11/03/impressionism-the-art-of-life-at-the-lightbox-in-woking/

Three free exhibitions at the Ashmolean Museum of Art and Archaeology https://londongrip.co.uk/2019/02/three-free-exhibitions-at-the-ashmolean-museum-of-art-and-archaeology-review-by-carla-scarano/ …

Before Christmas I spent a whole day in London with my husband binging on museums and art galleries. We popped into Abbot and Holder on Museum street to see the astonishing sketches of Yolanda Sonnabend. Her costume designs are simply marvellous, no wonder she worked for the Royal Opera House. She studied at the Slade School of Fine Art and had a brilliant artistic life. Her work is engaging in its colours and slender lines, challenging and innovative. Some of the works on display at the gallery can be considered abstract paintings, the

brushstrokes defying the figurative style of costume design, forming a framework of lines that evokes the outfit without stating it clearly.

We also visited the exhibition I am Ashurbanipal king of the world, king of Assyria at the British Museum, just round the corner. The exhibition reveals the incredible power of his empire that stretched from eastern Mediterranean to western Iran. Nineveh was the capital, a big city surrounded by walls. Symbols of the dynasty’s power were the human-headed winged bulls that protected the gates of the city. Both Ashurbanipal and the kings before him, built magnificent palaces decorated with carved wall panels painted in bright colours that represented the story of their achievements. The lion hunting, represented in some of these panels, symbolised the king’s bravery and his capacity to defeat the forces of chaos and maintain order. The king had an absolute power he expanded thanks to his mastery in taking command of the formidable Assyrian army. It was a war machine that conquered and subjugated the territories of today’s Iraq, Egypt, Iran and Middle East. Of course, wealth and slaves came from all over the empire. 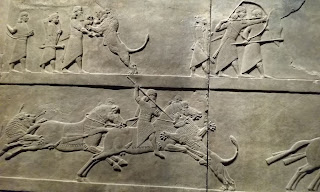 A video interestingly highlights scenes of battles on a large stone panel explaining them by using captions. Though Ashurbanipal was so powerful throughout his life, his decline and death remain a mystery. His final years are not recorded and after his death (probably around 638 BC) the Assyrian empire collapsed. The Iranian army sacked Nineveh and the tombs of the kings were looted. The city was set on fire and his sons were killed. 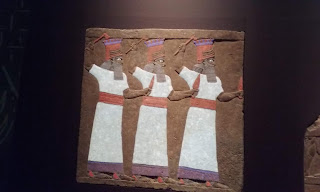 The exhibition also shows an interesting timeline that points out the archaeological excavations from early 19th century till today, and how the archaeologists tried to protect the heritage sites during the two Gulf wars. However, there are still remains to uncover buried under the sand of the desert waiting to be discovered and studied.

After the exhibition, walking towards Tottenham Court Road underground station, we couldn’t miss Cornelissen, the art shop on Great Russell street. They have unique origami paper that tempted my husband, and sets of colours you cannot find online or in ordinary shops. The place in itself is fascinating in its old style and wooden cupboards. I couldn’t help spending some money taking advantage of a discount thanks to my university card.

Posted by http://carlascarano.blogspot.co.uk/ at 23:42 No comments: 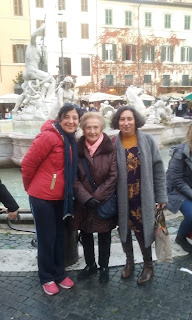 I still have old friends in Rome that I always meet whenever I go back. I was invited to a mass at Villa Malta in via Porta Pinciana near the elegant via Veneto. The villa was built in the 16th century and belonged to aristocratic families like Orsini and Mattei in the past. It hosted famous people, like Goethe, Angelica Kaufman, German ambassadors and even King Ludwig I. the Jesuits bought it after WW II and now it is the headquarters of their magazine, Civiltà Cattolica. From the top floor you can admire one of the most beautiful views of Rome, especially on a sunny day. We read Pope Francis’ speech delivered at the general audience on 19th December before mass, the link is here: https://www.vaticannews.va/en/pope/news/2018-12/pope-francis-general-audience-christmas-surprises.html  It was a stimulating piece highlighting the surprising side of the coming of Christ as a poor and vulnerable baby. I spent the rest of the day with a friend of mine who lives near Campo de’ Fiori and had just had a hip operation. She cooks gorgeous meals with simple ingredients. This time she prepared pasta with artichokes and frittata with spinach. She simply cooked the tender cores of the artichokes in oil and water with some lemon juice, a garlic clove and parsley. The result was mouth watering. The frittata was even simpler. She boiled spinach, cut it in pieces, added parmigiano and mixed it with four beaten eggs. My friend is very keen on balanced diets and always advice me to avoid sweets and cakes and rely on rice, better brown rice, proteins and vegetables. She is slim and fit and looks ten years younger than her real age. I try to follow her wise advice but a piece of chocolate or a slice of cake from time to time helps my day. The other friend I usually meet is from my university years. We share similar experiences about our elderly mothers. Getting older seems to have patterns: a bit of confusion, grumpiness and frustration for not being so able any more. If we are lucky to carry on till eighty or ninety we will all end in the same way. 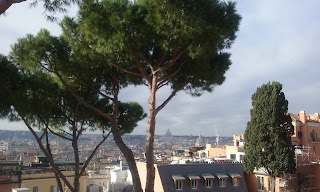 Speaking about elderly people, I found the Queen’s Christmas speech and the President of the Italian Republic Sergio Mattarella’s speech particularly engaging. 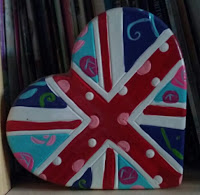 I loved the Queen’s speech and agree with what she said. I admired the precision of her message both in pointing out peace and goodwill at the core of Christmas, and the paradox of the capacity of good and evil present in human beings. She also emphasised some realistic goals, like friendship, mutual respect and hope that everybody should pursue in one’s own small way. She didn’t mention Brexit, which I found a wise choice.

In a period of political and social uncertainties, Sergio Mattarella called for a sense of community. In his opinion, Italian citizens should share ‘values, views, rights and duties’ overcoming divisions. It was a strong message very much needed in Italy at the moment. He also stressed common responsibility, friendship and mutual respect, as the Queen did. He pointed out some problems as well, like the lack of jobs, public debt, the reduction of production and the decaying infrastructures. Hard work and hope together with a sense of justice and trust in the institutions were considered a possible solution towards a better future. I particularly liked the conclusion when he spoke about his visit to a centre for autistic children in Verona highlighting their creativity and their ability to communicate with others.

Two memorable speeches that encapsulate in a balanced way our needs, hopes and dreams in view of a better world. 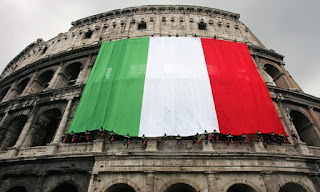 Posted by http://carlascarano.blogspot.co.uk/ at 00:33 No comments: