My husband and I managed to see the Christmas panto at the New Victoria Theatre in Woking. It was Cinderella with the ‘strictly fabulous’ Craig Revel Horwood. He played the wicked stepmother with such a verve and professionalism that I was flabbergasted. He is not only a good dancer, he has a great voice as well. In an interview he said that the stepmother is in the midst of a mid-life crisis, which would explain her wicked behaviour.

Before Christmas I also saw Hole by Ellie Kendrick at The Royal Court Theatre in Chelsea. It was a stimulating performance full of irony and gender power politics centred around how ancient myths mistreated and discriminated women. The theme is explored with references to Physics where the hole can be interpreted as the black hole that absorbs energy, the vagina and the unfathomable pit where desires, hopes and illusions fall. The injustice of Medusa, Orpheus and Euridice and Pandora’s myths is clearly exposed. At the end I felt there was a sense of incompleteness, a bittersweet aftertaste revealing that the process is never ending and might be futile. The cannibalistic undertones sounded a little overstressed in parts reminding of Santa Clarita Diet. The light effects were fascinating and all the actresses were fantastic. Whatever it means, there’s ‘No Way Back’.

In Rome I mainly watched TV with my mum in the evenings, murder mysteries were our favourites. The best ones were from an old series of Miss Marple with Margaret Rutherford on the channel La 7. They broadcasted two episodes one after the other on Saturdays so we were up till small hours. We also watched a Scarlet Letter’s version with a #metoo twist at the end. Renzo Arbore’s program Guarda Stupisci on Rai 2 had a cracking mixing of Arbore’s song ‘Aummo Aummo’ and a video clip with Stan Laurel and Oliver Hardy dancing tarantella. The song is here: https://www.youtube.com/watch?v=KLwPZjF8E3o  but I couldn’t find the English translation. You can watch Oliver and Hardy dancing tarantella here: https://www.youtube.com/watch?v=mwU6nsDudNc , but the song is different.

My mum and I not only watched TV in the evenings, we did our embroidery in the meantime. My mum is completing a tablecloth with leaves she bought online last summer when she was in England. She needed my help to sort the colours as the threads have different shades of green that look similar to one another. I am working from a line or two of poetry as a prompt using simple stitches and developing patterns around it. I find it extremely relaxing and creative.

I also prepared biscuits and a cake with the help of my mum and she cooked delicious soups and carciofi (artichokes) just for me. I will post the recipes on this blog next month. We packed the biscuits in boxes I tied up with gold, maroon and green ribbons and gave it as a present to neighbours and relatives.

My mum has the habit to attend the parish church regularly for Sunday mass and other meetings. She meets her best friends who are elderly people living in the same area. Most of them are widows. They support each other and have a lot in common. They dress up a bit for mass wearing elegant shoes matching with their bag for the occasion or red sparkling tops for Christmas. When it is cold they also show off in real furs, very fashionable when they were young in the 1960s and 1970s. Now they look over the top to me.

The other two main meeting points of the area, which is called ‘La Collina’ (the hill), are the hairdresser and the pharmacy. There is a bar as well but it doesn’t seem so attractive and they say it will probably close soon due to rent problems.

The hairdresser is a major meeting point where all the ladies have their hair done at least once a week in different shades of grey and blond. There is usually an average of half an hour waiting during which conversation soars. It is not proper gossiping, or maybe it is, it is rather an updating, an oral version of the tabloid of ‘La Collina’. The main topics are aches, infirmities and other news about family, friends and recent unmissable matters like dogs’ poo in the park down the road, stinking overflowing bins and the unpredictable timetable of the bus that links the area to the underground station.

There are a few other shops in the main street. One is a grocer manned by north Africans that sells everything. The staff is kind and helpful, they are willing to take the shopping to your home if the bags are too heavy. Whenever I hear them speaking Italian I sympathise with them and wonder if my English sounds as weird as their Italian. If it does, I understand some comments I have received like ‘your accent is so odd’. There is also a tattoo parlour and a dry cleaner that look like they share the same shop. 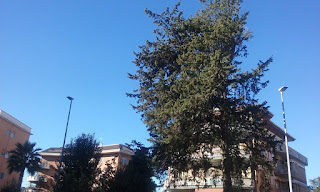 The pharmacy is the other chief meeting point. My mother visits it twice a week or even more and has an excellent relationship with the pharmacist. She almost worships him. He is a youngish guy, dark, tall and well built. He gives good advice on everything, even on selling cars, and is always supportive especially with elderly people, who make up most of the residents at ‘La Collina’. He books hospital appointments, knows specialists, reads hands (joking) and apparently has a room with a queen-size bed upstairs just in case. Calendars and refreshments were available on a table at the entrance during Christmas time.
Posted by http://carlascarano.blogspot.co.uk/ at 01:06 No comments:

What to wear at Christmas

Before Christmas it was so hectic with my university deadlines, cakes and biscuits to make, presents to wrap and luggage to pack, that I was relieved when I reached Rome. All I needed to think about was spending time with my mum and the rest of the family, and try not to gain too much weight. But it wasn’t so easy peasy. 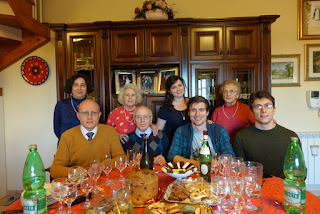 I had an asthma check before leaving which went very well, and exercised almost everyday at Woking Leisure Centre as I found out that my type 2 diabetes risk level had decreased in the last six months. So exercising works! I attended mainly yoga, aqua wellness and the gym from time to time. I followed all the instructions: jog it out, shake it off, squeeze everything I have…and if it hurts, apparently it is good. I also reduced sugar and drinks and increased vegetables and proteins. I couldn’t lose weight though, whenever I manage to lose half a kilo I gain it again the next week. Nice people say that I gained muscle mass that weights more than fat, but I find it is an excuse. Perhaps I should see a health care assistant and start a food diary. The problem is that I’m too fond of cakes, both making and eating them.

At Christmas I had a good success with my outfits mixing and matching clothes and accessories from charity shops, Primark and Tu at Sainsbury’s. I found two corduroy dungaree dresses with colourful patterns from Tu that I matched with turtle necks from Primark. They were very comfortable and perfect for the not-so-wintry weather of Rome. I wore some lucky picks from charities for the festivities, a purple dress plus knitted cardigan and a grey waistcoat with embroideries I dressed with a purple turtle neck. I like wearing leggings and flat shoes recently with knee length dresses and a matching turtle neck under it if it is cold. Once again I found nice colourful dresses at charities, one with chequered patterns and a gorgeous grey one with red flowers.

In Rome the weather was fine, it rained only two days in two weeks and though it was cold in the morning it got warmer during the day thanks to the sun shining in an incredible clear sky. I had a few days out with my mum in the centre visiting some exhibitions and meeting friends. We spent most of our time with family. My two sons and my daughter in law were with us and we had great celebrations all together at my parents in law’s.  My husband’s grandmother was with us as well on Boxing Day. She is ninety-seven and in good health on the whole though she is almost deaf now. She is always smiling and walks like a tortoise bent on her stick with her big shoes that help her keep her balance. Her siblings are all dead but some of her relatives lived till over a hundred. 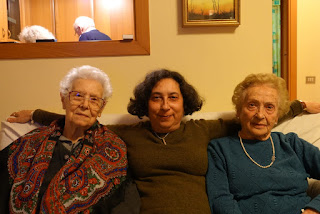 Unfortunately, on Christmas Eve I had a renal colic and had to be admitted at the A&E of Tor Vergata hospital. I must say that the procedure was very quick and efficient, the doctors and nurses were very kind and all young. I was in a bad state when I got there, almost unconscious. I had never had a renal colic before so when I started vomiting in the morning I thought I was simply sick. At hospital they diagnosed the colic and put the drip. I felt much better soon. The blood tests were all right and from the abdominal ultrasound they saw a stone in the left kidney. Before discharging, the doctors gave me medication and recommended to drink two litres of water per day. I was out in the early afternoon and luckily felt all right in the following days. After a few days, they did another check and saw the stone was moving towards the bladder. Back in England, I went to the GP who referred me to St. Peter’s hospital. Now I just need to pass the stone.

The experience had a good ending thanks to the efficiency of the A&E of Tor Vergata hospital but I was suddenly aware of how vulnerable we can be. In Naples there is a say: La salute è la prima cosa (health is the first thing), without health you cannot plan your life ahead. From an Italian point of view, the second thing is family. Food follows. 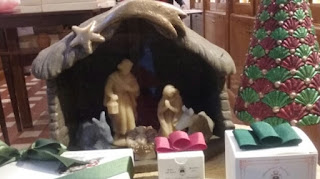