About Valentina, my autistic daughter 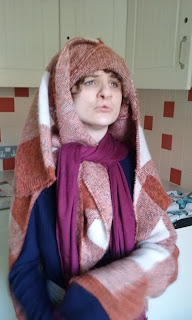 Before Christmas I also visited my autistic daughter Valentina who lives in a residential school near Doncaster. When we moved south a year and a half ago, social services realized she was too unsettled at home and we couldn’t cope with her any more. She was unhappy, aggressive and self-harming at times and my husband and I didn’t know how to help her. At first she was in a full time respite care facility a fifteen minute drive from our house, Ruth House in Mayford Green. This was a temporary placement till they found a proper residential school.

She had an apartment and two members of staff with her full time. We used to go and see her twice a week and realized she was happier and more settled in a place where she had stable routines and could arrange the space around her in the way she liked. The staff were exceptional, they were flexible enough to meet her needs and firm enough to give her rules and routines she was comfortable with and needed in order to stay safe . They also had great fun with her at times when she arranged her clothes in a fashionable and unique way, or mixed olive oil and ketchup with everything (even grapes and ice cream), or when she spread her favourite food (e.g. salami) on faces and shoes as an alternative to cream therapy, and even when she flipped her faeces around, giggling defiantly. They missed her when she left. 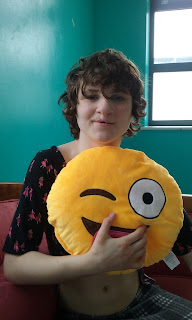 It wasn’t easy to find a residential school for my daughter because of her challenging, aggressive behaviour and her habit of stripping her clothes. None of the schools in Surrey or nearby accepted  her, but after a few months the Hesley Group, based near Doncaster, said yes. Members of staff visited her several times, observing her for days, then last April the transition was arranged. It took about two weeks to move her from one place to the other with members of staff from Ruth House assisting her in Doncaster. Finally she had a permanent place to stay and we could go and see her in her new home.

We have kept visiting her every 3-4 weeks, more often during holidays.  We have also the chance to spend the night there as they have accommodation for visiting families at school and, if we stay for the weekend, they offer a great full English breakfast in the school canteen. We found her more and more settled every time we went. At first she seemed unwilling to attend school, as she had been out of school for months when she was at Ruth house, but then she was happy about it and her communication (mainly BSL, PECS and Makaton) has definitely improved. At school they have sensory rooms, a gym, a canteen, a computer room adapted to her needs. We visited the school with her, she looked proud and happy to show us what she did and where she lived. She also showed us the houses where her friends live and where she had previously had a party.

They adapted the house to her needs as well, nailing the table and her bed to the floor, buying special plastic chairs filled with sand so she can’t throw them to the staff and getting rid of the furniture or colours she doesn’t like. They are also completing a bungalow for her as they realized she was uncomfortable in a two storey building. Her eating habits improved, she accepts a wider range of food and has proper meals instead of grazing the whole day as she used to.

The school is in a village so she can go out in the community, to the hairdresser, to the restaurant or cafe and go shopping, of course, one of her favourite activities. We went shopping with her once, she absolutely wanted a pair of tiny snow boots so she tried them several times but realized they didn’t possibly fit, finally she opted for a number of DVDs she carefully selected.

At Halloween she had a treasure hunt at school and managed to collect all the pieces of a skeleton scattered around the place and assemble it. For Christmas there was the assembly, the party and Santa’s grotto. She enjoyed most of them and looked happy and settled in the school community. We also went to the restaurant with her before Christmas with some members of the staff. She went to the toilette to change her clothes several times but on the whole was settled. The members of staff who take care of her have long shifts (from 7 in the morning till 9 in the evening, then there is the night shift) so she doesn’t change too many people in a day, which used to unsettle her. They are very dedicated to her and know her very well now. In fact, they are like family to her. 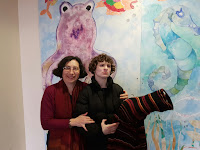 We would like to see her more often but living so far and working full time makes it very hard. We think she is happy where she is and, being almost 17, she needs her own space like our other children. We miss her sometimes despite her challenging and unpredictable behaviour, she is an essential part of our family and we wouldn’t be who we are without her. 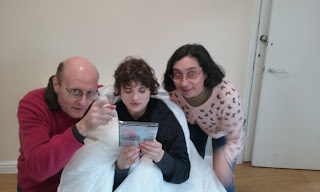