What I did on February half term 2017

Finally we reached half term. It was a great relief as the beginning of the term was very stressful due to different reasons, the most testing one was the fact that the international school where both my husband and I are teaching is unfortunately closing at the end of the school year. The consequence is that we are looking for a new job.

Just before the holidays we had the International Languages Day at school to celebrate the different languages and cultures present at our school, that is more than twenty. Students and teachers were encouraged to wear their traditional costumes and parents prepared delicious typical food from all the countries. There was an assembly at the end of the day where all the groups could perform a song, a poem or a dance linked to their culture. It was amazing to see how the students were proud to represent their country in different interesting ways. My Italian colleague and I dressed up in traditional costumes as well (she was wearing a costume from the area of Naples, I was wearing one from Sardinia, which I had made together with my mum last summer looking at some pictures of Sardinian costumes a friend of mine had sent me. It took a long time to complete it but it was worth it). We danced a tarantella with a twist (part traditional, part hip hop) with our Italian students. Pardon my boasting but it was a great success!

During half term week we planned to see all of our children. My daughter came from Edinburgh to see some friends in London so we could spend part of the weekend together. We visited a stunning orchids exhibition at the Princess of Wales Conservatory at Kew Gardens, I had never seen such an astounding display before. The variety of the orchids species and the way they were arranged was absolutely superb. Some were on huge baskets hanging on water, others arranged in columns, or forming a peacock or on display on a cart. Special ones were hanging from the ceiling like floating multi-coloured angels, their brightness standing out from the glass ceiling of the hot-house, the stringy roots coming down like frozen green worms. The soft music in the air helped imagine the dancing orchids similar to unattainable damsels or precious jewels out of hand. There were all colours, from purple to striking pink, all shades of yellow, maculated ones, pure white, blue, burgundy. There were slipper orchids, spiky ones, tiny and big, solitary and in clusters. All of them incredibly attractive. It is such a unique flower, fleshy, sensual, with an unmistakably harmonious shape, a natural beauty. In the same conservatory just before entering the orchids exhibition, there was a display of cactuses and other prickly plants, an extraordinary contrast with the orchids. 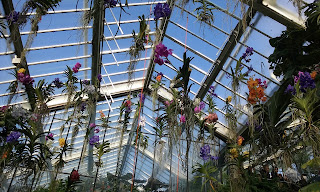 During the week we went to Oxford for the Poetry Society annual lecture featuring the German poet Jan Wagner, and saw our son as well. He is definitely absorbed in his Physics studies but could find the time for a pizza with us and have a tête-à-tête on truths in Physics and in Literature.

Jan Wagner’s lecture (The shedding of skins and schemes. A voice of one’s own and the voices of others) was very interesting. It was about the different ways in which poets are influenced by other poets; they imitate the work of their models at first and then develop their own voice. Jan Wagner’s models were the great masters (Shakespeare, Heine, Goethe, Brecht) that influenced him in the first place inspiring love for poetry, his prosody and vividness of imagery. Nevertheless, the continuous readings allowed him to reconsider their legacy and let his originality emerge. This confluence of many voices from different poets and different poems results in the inevitable intertextuality that is present in all texts, an important topic for me at the moment as I am studying intertextuality in Margaret Atwood’s work. I bought two books: Jan Wagner’s Self-portrait with a swarm of bees, translated by Iain Galbraith, and Love Poems by Bertolt Brecht, translated by David Constantine and Tom Kuhn. 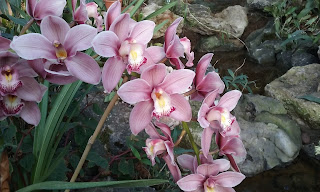 We also headed north to spend a few days with my autistic daughter Valentina near Doncaster. She was not well, a flu probably and a lot of coughing, but had enough spirit to take us around the school, showing us a new engaging sensory wall and see the new house where she is going to move into in two-three weeks. It’s a bungalow they enlarged for her, brand new and especially thought for her. I must say she looks eager to move there.

Finally we spent a day with my other son and his fiancée in Leeds. We visited their new apartment and had an update on the wedding preparations.

Coming back home we didn’t feel so well, probably Valentina gave us influenza. 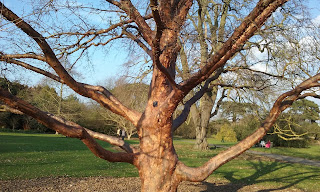