Life is a puff of wind we enjoy breathing together

On 25th October we celebrated our silver wedding anniversary. It was a cloudy day at the time but there was plenty of family and friends to share our joy with. We married at the Chapel of the university of Rome La Sapienza, where we had met. 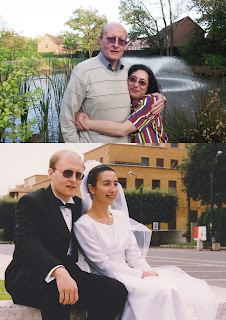 This time, for the occasion of the silver anniversary, we went to Her Majesty’s Theatre in London on the Saturday after, to see The Phantom of the Opera (a treat I longed for) and had a luscious dinner at Carluccio’s in Woking. It was a wonderful day!

My eldest son and my daughter in law came down from Leeds and my other son joined us from Oxford. Unfortunately my autistic daughter Valentina couldn’t be with us and my other daughter wasn’t there either. She was invited to the fashion week in Dubai just two weeks before the day of our gathering, a great opportunity she couldn’t miss.

My mum was with us as she hasn’t gone back to Italy yet. As a present, I asked my husband for several books by Margaret Atwood I absolutely need for my PhD research, a gift that will last. We also received presents from our children: DVDs, to watch together, and a ticket to see Churchill War Rooms in Downing Street plus dinner for two; I am looking forward the exciting experience.

Reaching the theatre in the centre of London on the Saturday wasn’t easy as there were works going on in the railway line from Woking to Waterloo. We had to take a bus to Weybridge and catch a train from Weybridge to Waterloo, which stopped at every station. We arrived ten minutes late but could enjoy the rest of the show. I was flabbergasted by the beauty of the music and the charm of the songs. I found it very similar to a traditional Opera, a genre I love, both in themes and in melodies. The story is rather twisted in some parts with an appeasing ending, which doesn’t solve the questions posed by the different ambiguous characters (Why is Christine attracted by the Phantom? Who is the Phantom and why does he change so suddenly at the end? What is the relation between love and success or power in the story?). Nevertheless, the beautiful music suggests what is going on between Christine and the Phantom, undoubtedly a complex passion where opposite feelings coexist. 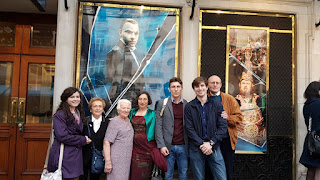 The twenty five years my husband and I lived together seem a long time to go but I feel now that they passed pretty quickly. They have been very busy years; three children at first, with only two years break one from the other, and the struggle to combine little children, work and a bit of social life. When my autistic daughter Valentina arrived (we adopted her in 2002) it was harder, but I must say we had great fun with all of them. It was a blessed time I look back with nostalgia sometimes, though I shouldn’t as I lived it fully. 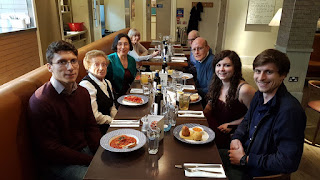 The children have grown up now and are all independent, or looked after like Valentina. They are away from home, sometimes come back for short intervals or visits. Our life as a couple is reshaping and mainly focusing on our jobs, interests and personal achievements, we (especially I) couldn’t follow in the past because of family commitments. Spending time together is not so easy because of our different jobs and interests but our paths cross from time to time and we refresh the closeness that has kept us together all these years. Remembering how we met and why we chose each other in the first place is a source of endless reassurance that we did the right thing. 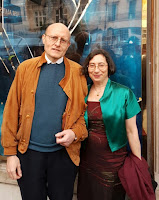 My husband and I are very different people, both physically (he is tall, blond, with blue eyes; I am short and dark, typically Mediterranean) and in character and interests. He is more a mathematical and ‘rational’ kind of person, believing in science and facts; he loves music and archaeology. I am definitely interested in literature and art, all kinds of art, and believe that you need to go beyond and above facts to understand people and the world; and, unfortunately, there isn’t much rationality in the way things go (it would be much easier if it worked so). Our apparently opposite natures merged and we managed to have a happy marriage.

Once at a social event in Italy, they gave us a task. We had to concentrate on coffee for a few minutes and shape the thing in our mind. When my husband and I talked about it afterwards, we realized he focused only on the cup while I focused only on the content, the black stuff. Together we made a whole cup of coffee. 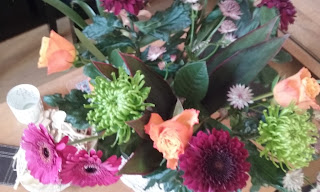