In February we celebrated my daughter Valentina’s 18th birthday. It was a great family gathering as my sons and my other daughter came from around the UK to the residential school where she lives near Doncaster. We put up a party in her beautiful accommodation, a bungalow the Hesley Group built just for her. 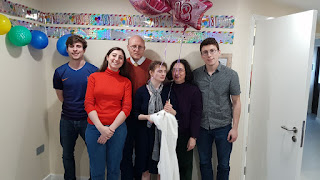 She’d had a party at school the day before as well and as soon as we arrived she showed us the presents they gave her, a unicorn blanket she proudly wore on her head and a pink My Little Pony soft toy.

My other daughter and I decorated the room with banners and balloons while one of my sons played with her using some glow in the dark stuff I’d found at the supermarket. Together they assembled some phosphorescent little tubes provided in the package in a very fanciful creative way and built bracelets, glasses and a sort of hat. She wore them in a dark room enjoying it tremendously.

Later on my other son and my husband took the present we had brought for her: a big soft gorilla toy as tall as her wrapped up in birthday paper. At first she couldn’t believe such a big pack was for her, then she tore up the paper and hugged and squeezed it. She was so happy about all the presents that she donned everything we had brought her: a new blue dress plus leggings, black boots, a silver scarf, a party badge, a Minions backpack, and even the inflated balloons that decorated the room, which she eventually wanted tidied up to her shoulders. It was her way to say that she was enjoying everything we had prepared for her and wished to treasure it.

The two members of staff present that day supported us in everything; all the staff that has been following her in these two years (about six people in all) are so committed to her care and well being that they have been nominated for an internal award, which I hope they will win as they really deserve it. 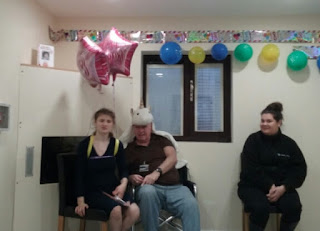 At the end of the day we had the cake. Valentina was delighted with it, she blew the candles and prompted us to clap our hands. Then we cut it and she liked it so much that she had two big slices, about one third of the whole cake. 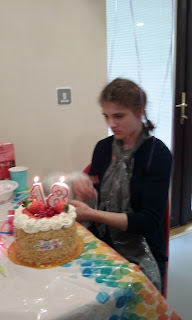 On the whole the day went very smoothly and we had great fun with her. It is unbelievable how much she has improved and how much she can take part in family and community events now, coping with almost everything, compared to two years ago, that is since she moved to the residential school in Doncaster. We are so grateful and happy about all the work the Hesley Group do for her and for the great achievements they attained with our daughter.

Now Valentina is no more a ‘child’, bureaucratically speaking, she is an ‘adult’. She will be out of education in about a year and a half and new arrangements will be made for her by the social services. Let’s hope they will be as good as they have been so far. As a family, we will always be at her side, she is such a cracking irresistible young lady!