Amedeo Modigliani: a fusion of classic volumes and primitive lines

An exhaustive comprehensive retrospective of Modigliani’s art was displayed at the Tate Modern showing his pictorial development chronologically with well explained captions. It highlighted the absolute revolution of his work that reflected the innovative attitude of the time and also produced a precise synthesis of classical and contemporary. Most of the pictures came from private collections and there was also the possibility to have a VR experience immersing in the virtual reality recreation of his last studio. 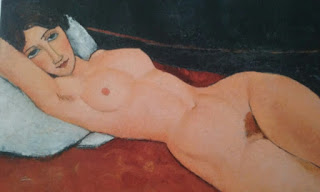 Modigliani was born in Livorno (Tuscany) and moved in the artistically thriving Paris in 1906, becoming part of the Montmartre group at first (mainly formed of French artists) and Montparnasse group later (which was more cosmopolitan). He was very much influenced by artists like Cézanne, Renoir, Toulouse-Lautrec, Picasso and Brancusi, and, on the literary side, by Jean Cocteau, Max Jacob and Lautréamont. His friends said that he recited extracts of Dante’s Divine Comedy by heart and had always in his pocket Le Chants de Maldoror by Lautréamont (Isidore-Lucien Ducasse), whose poems were characterized by a surrealistic satanic antihero.

Paris played a fundamental role in his career and artistic development as it was the place where he met the important people that influenced his art. He died young, at thirty-five, from tuberculosis, an illness he had suffered from since childhood and which was aggravated by his abuse of alcohol and drugs. The bohemian environment in which he lived was dominated by anarchism and surrealism. It was the time when Paris was the centre of the avant-garde art where the -ism, Cubism, Surrealism, Dadaism and Futurism, had a great influence. Nevertheless, Modigliani’s work developed in a consistent and original manner; he found his style and cleverly insisted on it. 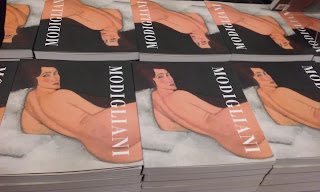 The exhibition presented clearly how he was influenced by the late impressionist art in the first portraits, positioning his work near some of the artists of the period in the first rooms. Subsequently, his profiles and stylized figures acquired a distinctive personality, a sensual awareness and controlled gaze that make his work so unique and prominent today. 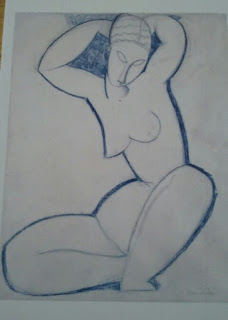 Examples of his original style were presented in the sketches of the caryatids, in the portrait of a girl (1917), in ‘La belle espagnole’ (1918) and in the astonishing nudes. They show how, in his mature phase, his distinctive and unmistakable style became characterized by stylized figures, elongated necks, oval faces and essential features, which were amply represented in the exhibition. They reflect a purity of drawing that owes to the Renaissance drawing tradition and to the archaic simplicity of African sculpture. His art is neither abstract nor mimetic; as a matter of fact, his stylisation is on the brink of abstraction reminding the deformed figures of Italian Mannerism.

A large space was dedicated to the twelve  nudes, and rightly so, as they were the showpieces of the exhibition. Most of them were painted around 1916 when Modigliani was supported by his new art dealer, Léopold Zborowsky. The models suggest a new sensuality and an independent attitude making eye contact with the viewer; they are modern women in control of their bodies, which reflects the economic autonomy they acquired. In fact, a professional model earned five francs per sitting, which was twice the daily wage of a woman factory worker. They also remind of similar famous paintings by Tiziano, Ingres, Velasquez, Goya and Manet, placing Modigliani’s work in a distinguished pictorial heritage. But Modigliani’s nudes are starker, more exposed and, at the same time, self-aware, pointing out his insightful interpretation of the sitter and his intuition of a new modern vision of woman’s sexuality. 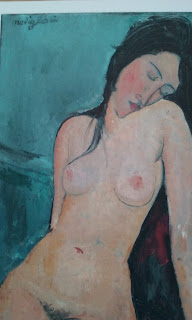 Viewers felt shocked at the time for the depiction of pubic hair, which are very sketchy, as according to tradition nudes were hair-free. Nevertheless, in 1866, fifty years earlier, Gustave Courbet painted a much more detailed and realistic picture of pubic hair in ‘L’origine du monde’, which makes the critique to Modigliani’s work rather pointless. The scandal provoked by his stark nudes dominating the picture, the pubic hair and the frank gaze of the models contributed to his fame of bohemian and maudit (cursed) artist, echoing the French abbreviation of his name, Modì.

Placing the pictures of the nudes one near the other at the Tate exhibition, allowed the viewer a comparison between Modigliani’s perceptions of the models, their different poses and peculiar personalities, which are expressed by the painter in the intensity of colours and precise contours, a psychological interior kind of painting.

Modigliani wanted to be a sculptor as well but the material was too expensive and he could not find the right place to work. Moreover, the dust produced from carving worsened his lung disease. There were some beautiful stone heads at the Tate exhibition; he first showed them at the Salon d’Automne in 1912. They have elongated necks and almond-shaped eyes, traits he further developed in his paintings as well. He used to work on preparatory drawings before approaching the stone and probably the series of sketches of caryatids, exhibited in the adjacent room, were aimed to an extensive sculpturing project that he could never realize. 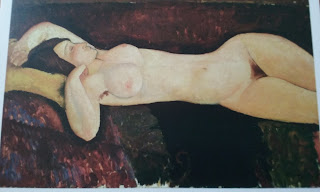 This reminded me of a famous prank that happened in Italy in 1984, which was not mentioned at the exhibition. It was a joke that involved some young pranksters in Livorno and made the art experts blush. What happened was that they found some stone sculptures in a canal and the art experts said they were by Modigliani without any doubt. In fact, according to a legend, Modigliani himself had thrown some of his stone work in a ditch because he thought it was of poor quality. For about forty days all the mass media publicized the scoop with great national and international resonance. Eventually, the three university students that had made the sculptures showed the photo they had taken while they were making them and made a ‘Modigliani stone head’ live during a Rai TV program (http://www.arte.rai.it/articoli/la-burla-delle-false-statue-di-modigliani/30204/default.aspx). Maybe a brief comment on this event would have added a quirky edge to the exhibition showing how the legend that surrounds the artist can be, sometimes, pure fantasy. The exhibition closed with the pictures he painted in the French Riviera during the last months of WW I. They are full of light, pastel colours replace the intense texture of the nudes, the blank eyes suggest a deeper introspection. And finally there were the portraits of Jeanne Hébuterne, a young artist who was his partner in his final years, pregnant of their first child, pensive and languid. She committed suicide the day after his death, which casts a tragic light on the life of the cursed artist, at times similar to a romantic legend, whose work ranged from the pure forms of classicism to avant-garde and primitive art, in a fusion that makes his work unique, as the Tate exhibition distinctly revealed.