Getting busy in Woking

My mum and I had a packed schedule over the summer. First of all, we became members of Woking leisure centre, attended the gym regularly once or twice a week plus other classes. My mum badly needed exercising to strengthen the muscles of her back hoping for some improvement with her pain. She suffers from back aches due to a twisted spine that is getting worse because of aging. Sometimes even walking is hell for her and she is worried she won’t be able to walk one day. For this reason, she also attended massage and ago puncture sessions in therapy centres and used the tens machine, which gave her a bit of relief. None of these activities solved her problem but were helpful on the whole and are probably contributing to avoid worse consequences.

She enjoyed the gym, especially pedalling, and also the stretch and balance classes where she could meet other elderly people. She didn’t like swimming or exercising in the water as she has developed a sort of uneasiness to water. On my part, I took the chance to start yoga classes again. Apart from a shocking first encounter with acrobatic yoga (I booked the class by mistake without being aware of what it was about, as there was no place left in the ‘normal’ yoga class that day), I adapted well to intermediate yoga sessions I attend twice a week with an excellent teacher. She is not only professionally topnotch and very attentive to all her students, no matter what level, she also intermingles her instructions with funny comments and hilarious explanations to make the exercise more ‘visual’, in some way. Here are some examples:

‘squat as if peeing on a dirty toilet’

My mum also attended the Italian club at the Maybury centre where she joins other Italian ladies who play bingo and have a cup of tea and a piece of cake together. They also sing old traditional Italian songs and have a good chat together. She met them at the Italian mass as well and we went to the cinema to see Mamma mia, here we go again and Invincible 2 with her best friend. Though my mum doesn’t understand or speak English, she read the story of the films in Italian beforehand and managed to follow the shows pretty well. I love Abba songs so Mamma Mia 2 was just heaven for me. The cast were so exceptional that you could pardon the foregone (and rather improbable) happy ending where all couples magically and forcibly match. I was only a bit puzzled by the absence of the real ‘mother figure’ at the end of the story. I mean the Greek lady who helped Donna to get through her troubles, have the baby and set up the hotel. She was present in Donna’s life and helped her to fulfil her dreams. But the lady disappears at the end. Maybe there is no place for people like her in Hollywood fairy tales. Instead, Donna’s biological mother, Sophie’s grandmother, comes out (nothing to say about Cher’s wonderful performance, though she was rather stiff on stage, maybe due to the tight costume and high heels). She is the one who ignored Donna when she was a girl, didn’t even turn up at her graduation and banished her when she was pregnant (Mamma mia 1). She is a sort of redeemed bad witch; perhaps they meant to stress the power of forgiveness, mandatory when you deal with successful rich people. 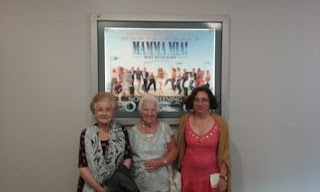 I loved Invincible 2 as well, I found it as incredibly good as the first one. I especially liked the new leading role assigned to the wife and the unpredictable transformations and multi-power characteristics of the youngest child of the couple. What I found a bit foregone (again) was the necessity of having an evil figure, a villain in flesh and blood, so to say, eventually. In this case I thought the most natural ending would’ve been to have a sort of hidden or displaced and undefinable power that disturbingly controls people. But the movie was meant for children.

Mum and I managed to go the the New Victoria theatre as well, an easy place to reach as you can park in the shopping centre car park and go up with the lift. We went to see Evita and War Horse two superb performances my mum could enjoy completely in spite of her lack of English. Just putting on a nice dress, going out and having good fun made her happy. We loved the wonderful music, the songs beautifully sung and the impressive choreographies. We were flabbergasted by the horse puppets, so well made and skilfully moved by the puppeteers to the point of conveying the horses’ ‘feelings’.

During the summer we were also busy making things. My mum made me some dresses and skirts from patterns dating back to the 1970s I found at charity shops for 50p. she always says she is not a professional seamstress, which is true, but she is so precise in her work that the final product looks almost perfect. We went mad about Frida Kahlo, influenced by the outstanding exhibition at the V&A, and bought some fabric online. I even decorated a twig heart inspired by her colours and style. Some of the materials my mum used were lucky pics from sales and charity shops I bought for a few pounds, they really fuelled our creativity and kept my mum busy. 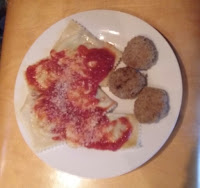 The other unmissable thing we did together was cooking, of course. We prepared delicious dishes planning menus in advance, using old and new recipes and relying on my mum’s undeniable cooking expertise, an art shared by most Italian mothers. We made home made ravioli, fettuccine and lasagne; we prepared rice with nettles, caponata, pasta alla norma, tomatoes stuffed with rice, black rice with prawns and various cakes from old and new recipes. This not only occupied our days in an agreeable and definitely useful way, but also encouraged my mum to have a proper meal, as she often has no appetite lately.

Here are some links to recipes I posted in the past:

new recipes my mum and I experimented during the summer will follow on this blog. 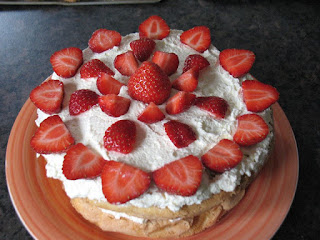