Before leaving for my long spring holiday in Japan and in Italy, I had a busy interesting time attending poetry readings, open mic events and exhibitions. In February I attended a riveting gathering at Watts Gallery in Compton. The venue was a beacon in the darkness of the country road displaying George Frederic Watts’ artwork as well as temporary exhibitions. The poetry reading was in the main gallery surrounded by the fascinating symbolist pictures by Watts. Jo Shapcott was the protagonist, a multi-awarded poet who read from her new and less new work in conversation with Christina Rossetti and Emily Dickinson.

Rossetti interpreted the idea of the muse from a woman’s perspective, different from what she was familiar with in her brother’s studio. Shapcott plays with this idea as well, alluding to a male muse and to oral sex. Some of Shapcott’s and Rossetti’s poems focus on the ‘after death’ theme where the poet imagines the thoughts of the dead, her consciousness alert though her body is lifeless:

I thought I knew my death
so when, after a bee buzz
of an afternoon, the rain started
and the fine hairs rose on my neck
and the long hairs tugged my scalp
and my mouth stank of seaweed
and a tingle ran round my wrists,
I didn’t recognise her. She lit
a green flame over my head
and even then I didn’t get it. She threw
me yards back, traced her filigree
red cartoons on my palm until
I was gone and still I didn’t know.

No transcendence is implied but a keen observation of the connections with the living. Pain and illness are also explored as both Rossetti and Shapcott suffered from Thyroids and breast cancer, which Shapcott could cure while Rossetti died of it. An exhibition of Christina Rossetti’s work and her portraits, painted by her brother Dante Gabriel, were on display in the near rooms. The illustrations and rare editions commemorated the great Victorian poet with interesting captions that enhanced her career and creativity.

My husband and I also spent a wonderful afternoon at the British Museum visiting three free exhibitions: Rembrandt, thinking on paper; Reimagining Captain Cook, Pacific perspectives; and The World Exists to be put on a Postcard. All of them will be on until 4th August. My favourite one is the postcard exhibition which shows apparently common commercial objects transformed in provoking artworks. They are graphic artistic postcards with sexual, satirical and political undertones, thought-provoking and funny. The content of the cards is challenging and experimental though they feature a traditional size.

The three hundred postcards on display are from the 1960s and 1970s donated by Jeremy Cooper and arranged in different sections such as landscapes, portraits, altered and political. A postcard is a simple means to self-publish, distribute and advertise your work and to avoid the traditional gallery exhibitions. It is more domestic, understated and yet effective in its own way.  Some of the postcard picture significant single objects such as shoes, a cup or post boxes, others are more mysterious, they have clouds, an eye or famous monuments from different perspectives. The focus is on keen observation that aims to explore the subject avoiding judgement and leaving a brief statement in the viewer’s mind. There are some manipulated pictures like the Statue of Liberty falling down or the Mona Lisa with washing instructions under the portrait. There are a lot of naked or skimpy dressed people and political statements such as ‘War is Over’ or ‘I don’t give a shit what your house is worth.’ Of course, Margaret Thatcher is portrayed as well as Ronald Reagan. The world in a postcard, as the title of the exhibition remarks, is small, changeable and exciting. 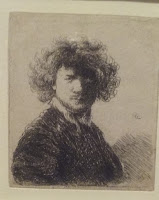 Rembrandt’s drawings are superb, they testify the richness and mastery of the artist’s approach in self-portraits, portraits and landscapes that are work-in-progress executed in etching, dry point, ink and pen. He depicted ordinary people mostly from the emerging Dutch middle class such as preachers, collectors and traders.  The contrast in light and shadow id deeply worked marking the chiaroscuro in a dramatic view that conveys accurate details and personal interpretation. Some of them are very dark, the figures are barely detectable in the darkness of the background and shades that penetrate and surround them. It is a vision that provokes and strikes the viewer.

James Cook’s voyages and explorations in Australia, New Zealand, New Caledonia and Hawaii, are the subject of the exhibition in room 91. Most of the artefacts were collected by Cook and the pictures on display are a response of contemporary artists to Cook’s legacy. It is a way to discuss and reinterpret the adventures of the great explorer and the consequences of the British rule. There are interesting objects such as a dog-skin cloak, a war canoe, shells and necklaces and an impressive costume of a Tahitian chief mourner. Prints from 19th century and contemporary artworks testify the evolution of Cook’s legacy. He was famous and respected, his interest in native cultures seemed genuine and not only aimed to the appropriation of indigenous traditions. He showed curiosity about the people and places he visited and explored that goes beyond simple interpretations of mere colonial profit. 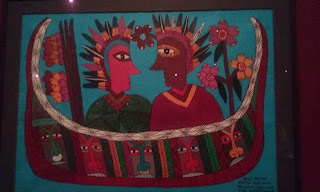 Finally, I saw The Green Book at the cinema and was flabbergasted by the well crafted plot, the engaging dialogues and skilful actors. I found the two protagonists a bit stereotyped at times but credible as well as and thought-provoking. I loved the Italian American guy and felt that the description of his family was very believable.

My story doesn’t end here, I also started a volunteering activity at the Lightbox in Woking. It is Woking museum which does not only hosts interesting exhibitions but also family events, workshops, lectures and poetry readings. I usually attend most of them and review the exhibitions for Woking Writing Circle’s Website. At the moment I am volunteering one afternoon every two weeks prompted at first by the Red Award university schemes I am completing for the University of Reading. They asked me for some volunteering hours and I thought it was a good idea to ask to the Lightbox and contribute to help them in their fantastic program and projects. It is a good opportunity to meet nice people and be useful. 😊