During the summer, my husband and I managed to have a few days off away from our routines and back garden. We visited our sons in the north of England and had trips not far from our area. Visiting Winchester was very interesting, the cathedral is superb and we also visited the exhibition with an astonishing illuminated Bible on display. The City Museum has interesting Roman and Anglo-Saxon artifacts and mosaics too. Jane Austen lived nearby, at Chawton House, during the last years of her life, which I never knew. She is buried in the cathedral. I found intriguing second-hand books at Chawton House, which is a place worth visiting, from Italian Farmhouse Cooking to Ice Creams, Sorbets, Mousses and Parfaits and a book on The Victorian Kitchen Garden. Fabulous! 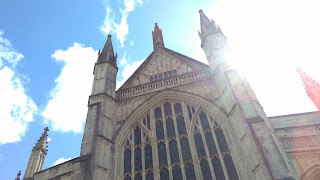 The cathedral was our first goal, a Norman building reshaped in a Gothic church in the 14th and 15th centuries. It survived the dissolution of monasteries and displays the different stages of its construction with sober Norman arches in the transept and high Gothic vaults in the nave. Jane Austen’s grave is on the left aisle with an inscription in brass that starts ‘Jane Austen, known to many by her writings,

endeared to her family by the varied charms of her character …’ and ends with a line from one of the proverbs of the Bible: ‘She openeth her mouth with wisdom and in her tongue is the law of kindness’, a true comment to her career and wonderful writings. An interesting exhibition, Kings and Scribes: The Birth of a Nation, displayed some important pieces tracing the history of the city as well as the renowned Winchester Bible, an elegant illuminated manuscript in four volumes commissioned by Henry of Blois in the 12th century. It is a huge work that might have cost as much as a small castle. The parchments are 23 by 15 inches and are neatly written looking like a printed version. The illustrations, especially the initials, reveal great sophistication and expertise as well as the hand of different masters; the colours are still bright as they used gold and lapis lazuli. The exhibition also displayed the relics of Swithun, an Anglo-Saxon saint and the Siebe-Gorman 6-bolt diver’s helmet that William Walker wore when he worked in the foundation of the cathedral for almost five years.

The City Museum has interesting artifacts from the ancient Roman time including beautiful mosaics. The Celtic settlement was renamed Venta Belgarum (the market place of the Belgae) and became an important trading centre producing pottery, tableware and metalware. Economy and trade thrived under the Anglo-Saxons and the Normans until the Black Death that spread all over Europe in 1348-50 reducing the population by a third. The pandemic changed the course of history as it is happening in a minor scale with Covid-19. Subsequently, Winchester declined and London became the centre of trades.

During the 19th century retail shops developed their small businesses and luxury products were imported from far away places which were part of the British Empire. Jane Austen’s relation to Winchester is also mentioned as she was born in Hampshire and lived nearby since1809. In 1816 she moved to Winchester to seek medical help but died in April of 1917 assisted by her sister Cassandra. Despite her illness she kept writing and composed a satirical poem, Venta, about Winchester races. Women were not allowed at her funeral according to the law of the time, so her sister could not attend it.
Chawton house, where Jane Austen lived for nine years, is only sixteen miles from Winchester and is a delightful place to visit. It was built in the 16th century by the Knight family and was influenced by 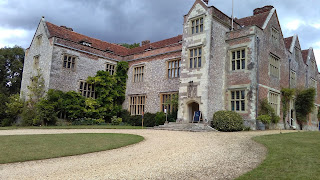 Elizabethan architecture. The current freeholder, Richard Knight, is a direct descendant of Jane Austen’s brother Edward. Luckily, additions and alterations did not change much of the interior and the exterior of the building as the owners did not have enough money to make major changes. The edifice also hosts the Centre for Early Women’s Writing, whose collection includes early feminist writings, fiction, journals and also books of recipes.

The house is beautiful; the main rooms are decorated with wooden panels and 18th century pictures recreate the atmosphere of Jane Austen’s time. The exhibition Man Up! on the second floor celebrated women dressed in men’s clothes during the 18th century. They were female soldiers and pirates that hid their identity behaving as men and cross-dressing. This gave them freedom of movement but was also risky. Women such as Hannah Snell and Mary Ann Talbot served in the Royal Navy and were wounded in battle. Pirates such as Ann Bonny and Mary Read operated in the Caribbean and were eventually convicted. Some of them were fleeing abusive relationships or were abandoned by their husbands and needed a job.  The exhibition also featured famous women writers  and artists such as Mary

Wollstonecraft, the Brontës, George Eliot, George Sand, Mary Beale, Mary Moser, Sara Siddons and Angelica Kauffman. In the final part, besides an interesting bookshop where I found an early epistolary novella, Lady Susan, by Jane Austen, there was a second hand book stall. Here is the list of the lucky picks I bought for a few pounds: Italian Farmhouse Cooking, Ice Creams, Sorbets, Mousses and Parfaits, The Victorian Kitchen Garden, The Golden Age of Finnish Art, Where’s
Spot and Jane Austen: A Celebration. I read through all of them with great interest rediscovering Jane Austen from different angles and appreciating once more her inspiring style and contagious wit. The amazing renaissance of Finnish art in the closing of the 19th century was unknown to me. It is linked to the famous composer Sibelius and the architect Eliel Saarinen. Though Finland was part of Sweden since 1362 and was conquered by Russia in 1808, it maintained its own language, folklore and distinctive art. My favourite books were the cream and sorbet one and the Italian farmhouse cooking. As soon as I came back home, I experimented soups, ice creams and sorbets with fairly successful results. The lemon sorbet was super and I learned some basic good rules about freezing and how to dose salt and use the white of the eggs in sorbets. At the end of our visit, we had a nice walk in the park and a good stretch in the lawn at safe social distance from the other visitors. 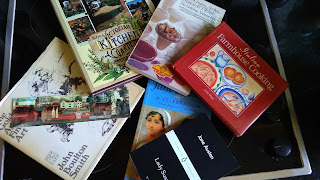