Our summer staycation included an inspiring visit to Arundel castle and seeing our sons in Leeds and Newcastle when the tier 2 was not yet in action. Looking back now, it seems it was a wonderful free time, though we were not aware of it. We could hug each other, walk side by side, go to the restaurant and sit at the same table and even linger in their apartments as long as we wished. Now we skype and are allowed only to see them outside, though it is discouraged by the Covid rules. And Christmas is a big question mark. 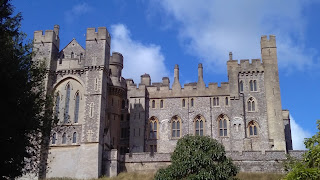 Arundel is a special place, not just the castle but also the town around it. We had planned the visit with my son Lorenzo and daughter in law Layla who had come to see us south. It was such a happy time! The castle belongs to the Dukes of Norfolk and is in remarkably good condition with beautiful

redesigned gardens around. Some parts of the castle date back to 1067. It was damaged during the Civil War and rebuilt in the Victorian period in Gothic style by Henry, the15th Duke of Norfolk, in honour of his late wife. The interior is impressive, it is not only well preserved, but beautiful furniture is also on display together with pictures and china pieces all elegantly arranged in the apartments. Walking around is a pleasure. The pieces collected are fascinating and include portraits by Van Dyck, Gainsborough, Reynolds and Lawrence, and even pictures by Canaletto. In the main Hall there is a real lion skin with head and open jaws and a big portrait of Cardinal Newman as well as pictures of family members with Pope John Paul II. My favourite place was the library where cosy corners with soft chairs and sofas are arranged along bookshelves packed with leather bound books locked behind wires. 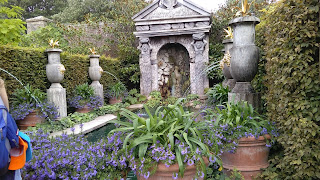 The gardens are charming; they have been redesigned by Duchess Georgina, the wife of the actual owner, Duke Edward Fitzalan-Howard. There are extraordinary arrangements of flower beds and roots and the leitmotif are constructions in wood and shells, sort of temples that emerge from the foliage and at the end of pathways. Stone fountains are surrounded by exotic plants such as echium that mingle with the more common wild flowers, verbena, foxgloves, cardoons and roses. Red hibiscus flowers are in the hothouse and apple arches were loaded with fruits. The beauty of the garden is in its arrangement that looks both pristine but also wild in some parts.

When we completed the tour, we wandered around the town centre visiting all the antique shops in the high street. I counted five selling different kinds of things, all interesting to browse and with affordable prices. I managed to find something to buy, of course, three dolls for my collection, two dolls from Japan and a papier mâché one from Mexico. We had a late lunch in a pizzeria and finally headed home. It was one of the best days of my summer holiday.

In late summer we visited Warwick castle too. I was impressed by the edifice and its history. William the Conqueror built the first castle but massive reconstructions and alterations were made throughout centuries. Nevertheless, the castle maintained its importance due to its strategic position on the river Avon and eventually was sold by David Greville to the Tussauds Group and absorbed into Merlin Entertainments in 2007. Maybe for this reason, in most of the rooms there are wax figures that re-create the ambience of the 19th century; they look almost real according to Md Tussaud’s style.

In the afternoon we attended  a spectacular show of birds of prey at the boathouse with vultures, condors, eagles and falcons flying over our heads, looking fierce and proud. Unfortunately, all my pictures were blurred as the birds were too swift. 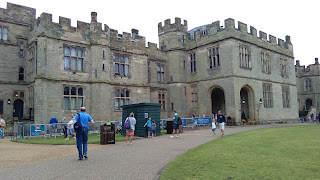 Newcastle was surprising, especially the castle. It is a sober edifice  whose construction started in the 12th century near the first bridge that was built on the river Tyne by the Emperor Hadrian. It is a

Norman castle with beautiful mason work in the arches at the entrance. It was restored in the 19th century but then the construction of the railway crossed the site and part of it had to be demolished. The castle keep can be visited until the top where we admired a magnificent view of Newcastle. It has a particular charm because it gives the idea of how life was in medieval time. In the evening we had dinner at Pani’s, a Sardinian restaurant with authentic Sardinian dishes and Sardinian waiters. We had Sardinian ravioli, caramelle (pasta stuffed with goat cheese) and even Sardinian beer. I loved it! We were able to relax and have a small vacation, though shorter than usual. 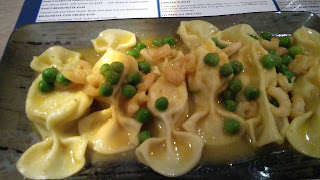