It was so sweet to meet my family for a few days, not just for a few hours, during the half term week at the beginning of June. The weather settled after the rain, windy storms and rare sunny spells we had in May. We are having warmer and brighter days in June and therefore a more positive disposition despite the Indian variant that is postponing the opening and
putting at risk the holidays abroad. Every time I think Covid-19 is over it comes back with all its uncertainties. But I eventually managed to meet my family, my sons who live in the north and my lovely granddaughter Violetta. She is growing up very well, experimenting with porridge, mashed carrots, plum and avocado pure. She is so lively, rolls over and grabs toys. Her favourites are the hungry caterpillar and Pikachu that she likes to taste and chew. She vocalises too and laughs a lot when we play peekaboo with her and when she hears words she likes for some reason like ‘beautiful’ or ‘poopie’. She is adorable and great fun.

We also visited my autistic daughter Valentina in the Redhill countryside and had a nice time with her in the garden playing with a ball and throwing confetti around. 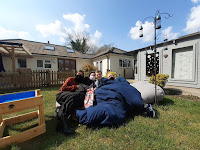 With the good weather I am back to the vegetable garden trugs. I have planted tomatoes, beans, lettuce and courgettes. New flowers decorate my pot garden in an explosion of colours. I am painting flowers too in watercolours, ink, felt pens, acrylics and oil pastels. It is a relaxing and rewarding hobby, a break from my studies and writings. I also sold a few drawings through the Woking Art Society’s virtual gallery and received good feedbacks on my artwork. Here is the link to some examples on my website: https://www.carlascaranod.co.uk/?Paintings

Some of my poems, articles and prose pieces have been accepted by online magazines and will be out during or after the summer.

Last week I visited the wonderful Hannah Bruce’s open studio (http://www.hannahbruce.co.uk/ ) at Lansbury Business Estate near Knaphill and other open studios in Surrey. Great works were on display made by established artists, disabled artists and amateurs. I especially like Hannah’s artwork, her original way of merging loose and detailed styles drawing attention to the subject. I also liked some jewellery pieces and bought necklaces with pansies for my daughter and daughter in law in honour of Violetta.

At the end of May I attended an engrossing four-day conference with Accute (Association of Canadian College and University Teachers of English) in which  I read my paper on The Testaments by Margaret Atwood titled ‘The Testaments: an intertextual dialogue between witnessing and storytelling’, chaired a panel and took part in the Twitter conference with my article on the Arctic. It was a great opportunity to meet Canadian scholars and attend readings on Indigenous culture, creative writing and Canadian history.

Poetry workshops are a boost for my poetry. During the Second Light’s workshops I attended in May I drafted several poems on the theme of renewal through nature. The workshops were with Jean Atkin, Esther Morgan, Sarah Westcott and Jacqueline Saphra. The emphasis was on creativity and making things, such as food, as well as exploring the desire of making changes in our lives and aiming for larger ambitions. I am also taking part in monthly workshops organised by David Caddy for Tears in the Fence with introductory essays on the topics; next one will be on ethnopoetics. In July I will have more workshops with the Poetry Business and The Poetry School. Exciting! 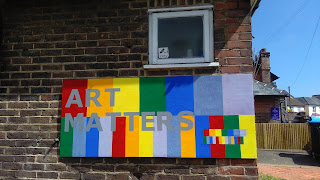 With the opening of cultural venues and museums I could visit some interesting exhibitions and am writing the reviews. I discovered the British painter and sculptor Michael Ayrton, whose centenary exhibition is on display at The Lightbox in Woking until the 8th of August. His variegated approach to art and his work as an essayist, teacher and broadcaster opens to different expressions of his thought which are especially linked to the Mediterranean world and to Greek myths. Here is the review I wrote for the Woking Writers Circle’s website: https://wokingwriters.wordpress.com/2021/06/17/celebrating-michael-ayrton-a-centenary-exhibition/ .

I visited the Dubuffet’s exhibition at the Barbican too (Jean Dubuffet: Brutal Beauty, until 22nd August), Diana’s exhibition at Kensington Palace (Royal Style in the Making, until 2nd January 2022) and Making Nuno: Japanese Textile (until 11th July) at Japan House in Kensington High street. I was flabbergasted by the faux-naïveté of Dubuffet’s art; it is so liberating and yet thoughtful, free and great fun but also engaging and sellable. ‘Very French’, as some reviewers remarked, that is, skilful, artistically renewing and compelling. He breaks artistic rules but also confirms the importance of the artistic product. The 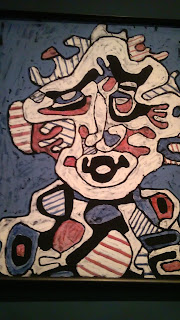 exhibition is comprehensive and covers four decades of the artist’s work; it is the first major survey of Dubuffet’s work in the UK after more than fifty years. What I especially admire in his work is his relentless exploration of the potentials of art beyond the predictable; he renewed his products all the time. At the same time, he alluded to the ordinary and explored the ‘mental’ or ‘spiritual’ side too, that is, what people cannot see but can imagine. This happens for example in his assemblage pieces, sort of collage with organic and non-organic material, such as butterfly wings and glass shards. 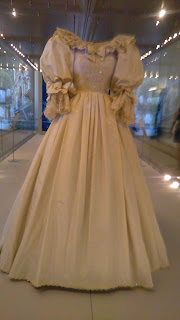 I love Diana’s story and personality, her fragility, sad love stories and her commitment and openness to vulnerable people. Her wedding dress is ‘romantic and soft’ as the fashion designer who created it, Elizabeth Emanuel, remarks in a video clip. It was made by British-made  material according to the tradition, and alludes to queen Victoria’s wedding dress. It has the longest train ever and thousands of sequins are sewn all over. I visited the previous exhibition of her dresses in 2019 and admired the astonishing beauty of her outfits and also her touch in the choices she made. She used to make comments on the sketches the fashion designers sent her and suggested changes. In this exhibition the central piece is her wedding dress which speaks volumes about her story. It is a complex, heavily embroidered dress with puffed up sleeves, large crinoline-like skirt and long train. She was dressed up like a princess in a fairy tale and she believed it at first. I suppose she struggled to maintain the façade clean but it was not the case. Flaws and human frailties surfaced both in Diana’s and in Charles’s stories and her world collapsed. The wedding dress is a beautiful artistic example of this fantasy world, intricate and precious but, alas, not true. At Kensington Palace I also found and intriguing book by Ali Hughes, Our Rainbow Queen, which features queen Elizabeth’s colourful outfits from red to yellow, green, neutral colours and print patterns. I love the queen’s style, her single-colour outfits that reflect her duty and her commitment to the nation as well as a ‘quiet luxury’ that is beautiful to see. She speaks through them in an understated and determined way.

Stepping in Japan House is like going back to Tokyo; the atmosphere, the products on sale, the matcha tea, all reminded me of the time I spent in Japan when I visited my daughter in spring 2019 and 2020. The exhibition is small but very interesting. The delicate colours and making of the fabrics are fascinating. The exhibition emphasises the making of fabrics and the stories behind the materials that are linked to Japanese culture and tradition. I especially liked a red spiralling pattern made with a chemical lace method. I booked more exhibitions for the end of July at the V&A and am looking forward to spending a whole day there. 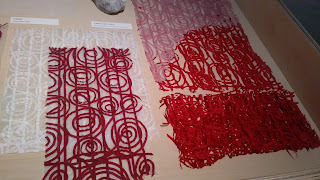 Back to the cinema was my other priority. After the Oscars I wished to see Nomadland, the story of houseless people who travel around America in a van or caravan. The protagonist, Fern, loses her job and suffers from a bereavement, her husband dies and she has no income. Her life changes, she buys a van and is on the road looking for seasonal jobs. Life becomes tougher and tougher but she is also freer. She meets new people and has new experiences connected to nature. Scenes of wild landscapes, astonishing dawns and sunsets are breath-taking. She works for Amazon in the fulfilment centre and in a Wall Drug restaurant where she meets a nice guy but eventually decides not to start a relationship or settle. Her nomadic spirit prevails in a research of the self that is in progress and connects to the earth, to the American landscape that goes from the heat of the desert to the snow of Nevada. She is in motion, in constant transit, sometimes in danger but doesn’t surrender. This is the life she chooses and wishes to live without looking back. The main leitmotif explored in the movie is the frequent reference to stones. They appear in different shapes and colours, apparently common objects and yet unique in their different shapes. I have recently read a book on pebbles, The Book of Pebbles by Christopher Stocks with illustrations by Angie Lewin (Thames and Hudson, 2019), which celebrates the pleasure of collecting and studying pebbles. I still have a couple of shoeboxes full of pebbles and shells I collected on Italian beaches with my children when they were kids.  Christopher Stocks interestingly remarks that pebbles have a story, change in time, though slowly, and are shaped by waters and the weather. We can discover their real story only by breaking them and examining the inner parts. They are therefore ancient objects, part of the natural world and connected to our human condition. 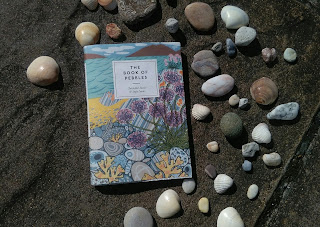 The Father was the other film I wanted to see. Anthony Hopkins performs an impressive and outstanding interpretation of an elderly man affected by dementia, but the thing that most impressed me in the film is the angle the story is told from. We follow the narration from the father’s point of view, that is, from a man overwhelmed by confusion who mixes facts and suffers from hallucinations. The narrative goes backwards and forwards and repeats itself, reflecting the old man’s state of mind. It is a challenging perspective and so well developed that you find yourself inside the dramatic events without being aware of it. I was flabbergasted by this movie, the ambience, the music, the story, the acting, everything was stunning.

After the opening of leisure centre, I went back to my yoga classes in presence and I booked a yoga retreat on the Isle of Wight with my yoga group at the end of September. Swimming is also becoming an important part of my routine and exercise practices. The feeling of being weightless and suspended in the embracing water is so relaxing and fulfilling. Finally, we are following the European Championship hoping that Mancini’s team will pass the group stage and carry on. Italy has a good team with great footballers like Bonucci, Chiellini, Immobile, Insigne and the goalkeeper Donnarumma. Unfortunately, there isn’t a Baggio or a Totti anymore but I still hope they can make it.

And here are some flowers:

The dark interior entices me.

I wish to descend in your depths

and wrap myself in the scarlet corolla.

The light lightness of the seeds

wandering in the wind, landing weightless

Seeing you is seeing me,

I slip into purpleness

shying away, relying on today.

my shameful self is self-consumed