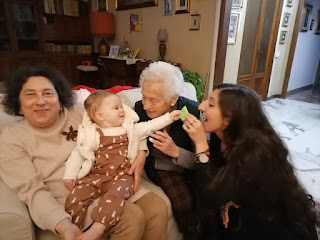 It was exciting to see all my Italian family again at Christmas. My sons and my daughter travelled to Italy as well and we were all together in Rome for about two weeks. Seeing my mum after two years was almost moving. I found her fit considering she is 91, independent in her daily routines and still sharp in her comments. As soon as she saw me, she told me straight away that I was aging, and she added that she didn’t like my hair and a pair of yellow suede shoes that I wore most of the time as they are very comfortable. Apart from these funny remarks, she was very caring and sweet. We were together all the time, did our shopping, watched TV in the evening and did our crochet, visited neighbours and friends and I also helped her with some bureaucratic things she had to do. Coping with Italian bureaucracy is not easy, not only the council offices are far away and difficult to reach with public transport, but you also need to provide stamps to add to the documents and these stamps are not sold on site. You are supposed to know this though the information is not provided. When I lived in Italy, I was used to these procedures but now they seem so weird and annoying. We took a taxi to reach the local council office and to go back home and had interesting conversations with the taxi drivers. On the way to the office the taxi driver was pro-vax and told us the story of one of his nieces who tested positive for Covid and had to self-isolate. He blamed the anti-vaxxers who, according to him, spread the virus. On the way back the taxi driver had the opposite view. He didn’t wear a mask and when my mother started to blame the Italian bureaucracy, he seized the opportunity and ripped into the government. He had such a defiant and aggressive tone that at a certain point I said that my mum and I had triple vaccination and then he finally stopped talking. 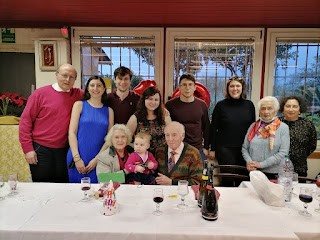 We celebrated Christmas at my parents in law’s house with the best Italian food and good wine. On Boxing day, we went to a restaurant to celebrate my father in law’s 81st birthday as we could not celebrate his 80th last year because of the Covid restrictions. The restaurant had a traditional menu typical of the cuisine of Rome such as fagioli con le cotiche (Roman style pork and borlotti beans), porchetta (roast pork), home-made fettuccine with porcini mushrooms, pasta amatriciana and a fruit tart that reminded me of cheesecake. All the relatives were there sitting at separate tables and we all wore masks when we were not eating. My granddaughter Violetta received a lot of presents but she seemed more interested in the wrapping paper than in the toys and clothes. She was smiling and calm all the time though the whole event lasted about five hours. We took a lot of family photos which look a bit formal, but we really enjoyed the gathering after such a long lockdown.

I was surprised and pleased that in Italy they were so well organised and consistent in the Covid regulations. This is mainly due to the stability of the Italian government led by Mario Draghi (Mario ‘the dragon’); he is managing to keep the coalition together and is guiding Italy towards recovery. I think the tragic effects of the pandemic in 2019 and 2020, especially in the north of Italy, was so frightening that Italian people don’t wish to fuss around in politics at the moment and the parties are prioritising economic and social renewal. Mario Draghi is considered a hero of sorts, and now that the president of the republic, Sergio Mattarella, has concluded his presidency, they suggested his name as a possible new president. The members of parliament are voting every day, but they haven’t reached an agreement yet. Even Silvio Berlusconi was proposed as president by the right-wing parties, who don’t seem to remember the bunga-bunga scandals and the allegations of corruption against him. The Italian president has not much power but is a symbolic figure who represents the country, similar to the Queen in the UK. What dreadful image of Italy would Berlusconi convey! Sergio Mattarella is 81 and said clearly that he is not willing to be elected for a second term, which would last seven more years. Maybe he feels tired and he is right, he did his bit brilliantly and the job is a big responsibility and commitment. What about a woman? The name of Marta Cartabia, the Minister of Justice, has been proposed as well.

Compared to the UK, Italy seemed more under control and stable, which surprised me again as it is usually the contrary, Italy is a mess and the UK government is consistent and reliable. The partygate and other scandals linked to Boris Johnson and his team are putting a lot of strain in the Conservative government. The PM seems to have lost authority in his own party. But who can they put in his place? In an article on The Times, they were asking ‘Where is the Churchill for our time?’ but I don’t think there is an answer. Shall we have early general elections as it often happens in Italy in similar circumstances? I cannot see short term solutions.

My mum had a lot of Christmas lights inside and outside her home; she even kept the French window ajar to let the cable pass through it and plug it inside. I had a nightmare one night imagining a tall figure coming in from the balcony and wandering around the house with Christmas lights on its head, spooky! Adding to the ghost-like atmosphere, there was also a disturbing noise in the living room every 5-7 minutes. I inquired about it and my mum said that it was a fragrance shaker that puffed some scent out. In the evening we watched television till late following all the debates about Covid restrictions which were pretty much the same as in the UK. They updated about the Covid cases every day, wondered if the super green pass is a fair measure. The anti-vaxxers were identified as people from the far right and far left. I have some friends who have refused to be vaccinated but who do not belong to these categories. They are just afraid that the Covid vaccination might provoke irreparable side effects. We also watched old films such as Flawless and The Age of Innocence and a program on Alberto Sordi, a famous Italian actor who had roles in more than a hundred films.

I followed Justine Welby’s speech, pope Francis’ speech, the queen’s and Mattarella’s speeches as well. I found that all of them reflected on our main concerns though from different points of view. They talked about the different bereavements, the sufferings of refugees and the struggles for a fairer society. Mattarella emphasised the capacity to recover not only from the economic crisis due to the pandemic but also from personal failures. They were all messages of hope that should help us in this time of recovery. 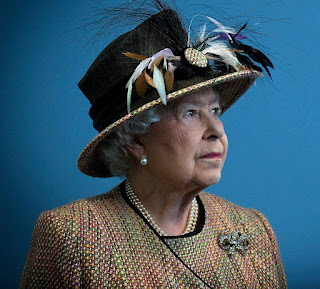 There were also interesting exhibitions in Rome but my mum gets tired easily now, so we decided to take it easy. However, we managed to visit Villa Torlonia in via Nomentana, not far from my mum’s place. The elegant buildings of the Villa host museums and exhibitions in the beautiful environment of the park. Here is my latest review of the park and its 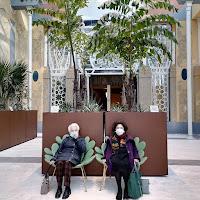 It was a gorgeous sunny day when we visited Villa Torlonia and we had a wonderful time despite the delays due to the Covid regulations. We spent more time queuing and distancing because of the Covid rules than visiting the different places. But this is our time. I feel lucky that I had the opportunity to visit my family and that they are all well. We had a great time together and I finally came back to the UK safe and in good health.