Since I posted my last blog on Lancashire Life website a few things have happened. Being the last month of the general election campaign, the most important event is that Ed Miliband was in Lancaster yesterday.
The appointment was at 2 pm at the railway station, Friends’ house side. I was there at ten to two but they were already saying he would be late. We were comfortable in the station entrance – it’s always well heated.


He was coming by train, somebody said. I thought he was just going to wave at us from a train window and maybe say some hasty supportive words before the train would start off again. But then they said he was stuck in traffic, in Morecambe. So he was in a bus, or a car.
At a quarter to three they said he might arrive at platform three so we all moved there. We must have been about a hundred people or more, with red and yellow Vote Labours boards, red badges pinned to lapels and coats and flags saying ‘A better plan, a better future’. All very well behaved, I must say. A chubby tall policeman was walking around nearby unconcerned. 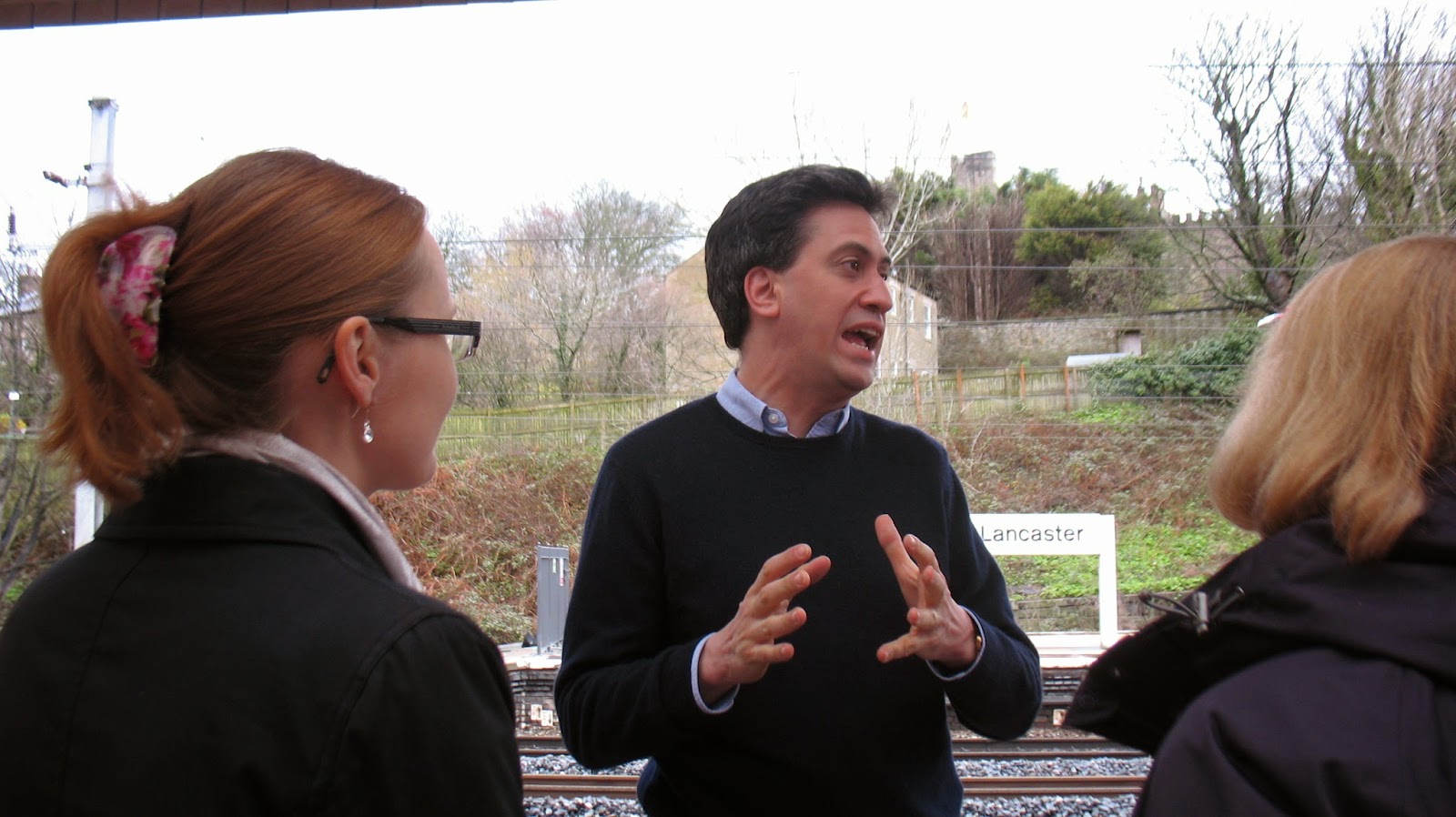 I chatted constantly with my friend Janet, who I met at the Labour Hall where we are organizing volunteering and canvassing for this last hot month of the campaign. We were wondering if Ed would look tall and slim as in TV or if he would be a disappointing shorter and fatter person. The screen can change people a lot, we said, make-up and all the other tricks can make you look different. And pictures on magazines and newspapers are notoriously readjusted. We were curious.
At three thirty we were still on platform three starting to feel the cold, humid breeze, not freezing yet, but wondering how long it would take. Then the official announcement: he would not come to Lancaster but he would be in Morecambe shortly, we could catch a train and go to Morecambe station. Nobody was willing to do it except Janet and I. Half of the people waiting there left.
While we were on the way to buy our tickets to Morecambe, one of the students who was part of the team dashed past us saying there was a change. Two tall men in suit on platform three were saying Ed Miliband was coming in about forty minutes, and would we like a drink or a snack in the meantime? Janet and I had a hot drink and waited overexcited.
The two men in suit went back and forth to hand people bottles, cups and crisps (they were part of Ed’s team). More people arrived with union flags, we were joking about how long he would stay with us, maybe just waving as I had thought at first.
We waited a bit more with our flags, boards and smiles ready. And then he arrived. He is tall and slim. He spent time with us, spoke to us, took photos with us, shook hands and was very very nice. Genuine is the right word. I took photos but I was too shy to ask to have a photo with him. Next time.
And now that I finally have my new blog I am going to start again posting once a week, usually during the weekend, except for holidays. I am also going to re-post my old articles under topic titles like ‘travel journal summer 2013’ or ‘aubergine recipes’, ‘cakes’, etc. My blog link is http://carlascarano.blogspot.co.uk/  or you can find the link on my website www.carlascaranod.co.uk
An Easter cake recipe will follow soon.