I took great delight in reading the Wayleave poets’ pamphlets. Here are brief reviews of their works.
By the Light of Day by Pauline Keith
A collection of tightly-knitted poems referring to Pauline’s childhood and family. The central point is the family slaughter-yard where cows and horses are killed as part of the ordinary process of getting rid of old or sick animals to produce dog and cat food. But for a child it is a mysterious ritual, ruthless and fascinating. A world where blood and carcasses, knives and maggots are all familiar, described with innocent honesty, yet realistically.  There is an intriguing gap between the horror of what is perpetrated in the slaughter-yard and the business-like attitude it is dealt with. A gap cleverly filled with humour, precise description and compassion. 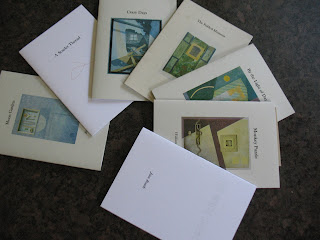 The Folded Moment by Mike Barlow
I wrote about this book before, as I read it when published about a year ago. Re-reading and re-writing about it, I find it cleverer than ever. The poems evoke nature, both animal and vegetable, observing, filtering and conveying it in sounds and stories. The poet is a stone, washed over by cloudy sky and rainstorm, has close encounters with buck and doe, breathes daylight. It’s all so deeply felt, profoundly developed and finally, skilfully shaped to be savoured by the reader. A unique experience.
Crazy Days by Carole Coates
Carole writes about her husband’s illness which caused distress and pain in their lives. A rare case of Creutzfeldt Jacob Disease meant seizures, gaps of memory and childish cravings for sugar. During the cure he became temperamental because of the medication, not himself. And then the slow recovery. The poems are touching, resilient in their attempt to explain, understand, help and testify what is happening in John’s brain. A lucid, compassionate record of difficult times lived bravely.
A Scarlet Thread by Elizabeth Burns
This is a sequence of poems inspired by the paintings of Anne Redpath, a renowned Scottish painter who travelled throughout Europe, especially in the Mediterranean countries. She was an associate of the Royal Scottish Academy and of the Royal Academy and was awarded the O.B.E. in 1955. The title of the sequence by Elizabeth Burns relates to a scarlet thread ‘running through the grey’ of her father’s tweed, a bright colour standing out against ‘quiet’ colours, probably a symbol of her own destiny, and a leitmotif in the poems echoing the paintings. As Redpath herself said, ‘I do with a spot of red or yellow in a harmony of grey, what my father did in his tweed’. The poems describe her work, remind us of her life and evoke her art; they create images from the pictures and refer to them, adding meaning and completing what was painted. They are a biography in verse, giving us an inner perspective.
Moon Garden by Ron Scowcroft
Ron’s poems have always shown me a sense of domestic simplicity. Using an easy simile I can say they are as clear as spring water. They speak of him, of course, of his childhood and of his family. They are sincere, open, rich in words and profoundly inspired by his memories and experiences. My favourite is Colour Blind, because of the contrast of ‘the red dress I loved you in’, so meaningful and intense, with the grey background surrounding it. A blotch of passionate colour in a monotone world, leading to the beautiful and intimate image of the last stanza: ‘you are a colour no-one can see’. They are certainly poems the reader can’t forget.
Monkey Puzzle by William Gilson
William Gilson’s poems are memories of his life in America as a boy and a young man, mixed with his present life in Cumbria where he has been living for twenty years. The past is alive in his recollection as if happening now, vivid and everlasting. In contrast, the present trickles in a desultory manner, unreal, insubstantial, ungraspable, amid the constant fear of missing out. With the first poem we are in a graveyard where he used to play with his brother, where death is falling asleep. The poems unravel as episodes of American life, working on a farm, caddying at a golf club and then the move to rainy Cumbria, getting elderly, cancer, feeling the journey of life will end at some point. The conclusion is a quiet spell just after an escaped danger. Once again the poet is reading and writing, safe at home.
The White Silence by Jane Routh
The famous story of Sir John Franklin and his naval expedition to find the northwest passage in 1845 is cleverly told by Jane Routh in her well crafted poems. She imagines the silence, the whiteness and the cold the crew had to face once caught in ice, and the vain effort to find an easier and faster way to circumnavigate the American continent. It was a waste of time and of human life. Nevertheless Franklin was remembered and depicted as a hero, leaving space for the poet's witty analysis. The freezing hell where the crew met death is impressively described with its trapping stillness and strangling ice. What was rescued from the shipwreck is symbolic of the vainglory of the expedition. They faced the Arctic unprepared and ended dreadfully. Ironically, the passage opened for the first time in 2007 when the ice melted and the oceans met. 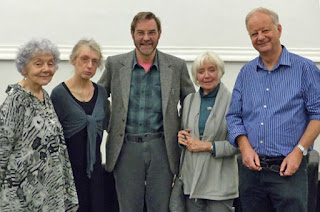