I went to school as soon as I could walk, that is before I was one. My mother was a nursery school teacher and, though she taught children from three to five or six years old, the head teacher allowed her to bring me to school with her. I was a very good little girl, she told me once, and made friends with other children easily. Besides I took part in all the activities: drawing, reciting poems, singing and playing in the garden. My mum was there to look after me but I was pretty independent, could manage by myself and coped with the world of older children very well. 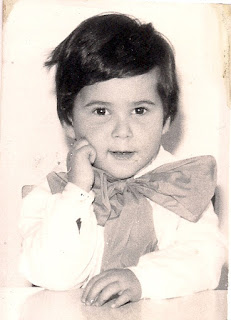 My mum’s school was in the suburbs of Rome, in an area called Pontemammolo, a working class district about half an hour's drive from where my parents still live. I remember she drove an old Fiat 500 along the busy via Tiburtina, then turned sharp right and we were in Pontemammolo. She used to stop in front of a low brick building to buy some focaccia at the baker’s (we usually had it at the mid-morning break), then carried on to the market square. Just along the square was the nursery school, surrounded by a spacious fenced garden with fruit trees, bushes with purple flowers and a mimosa tree in the middle. Part of it was paved but mostly there was grass and there were pebbles, which I used to pick up and store in my pockets, especially the white ones with rusty veins, thinking they were precious stones. We didn’t wear uniforms but white smocks with a blue ribbon at the collar tied up in a bow which I always struggled to keep tidy. Drawing, collecting pebbles and climbing the mimosa tree are the activities I remember best. It was often sunny so we had time outside almost every day. I loved playing with the other children. Hopscotch and hide and seek were my favourites. I also learned skipping games. Two children held the ends of the skipping rope and one or more jumped in. We took turns and sang songs I can’t remember. It was difficult to  jump into the magic space without tripping or, worse, being hit by the rope. The hardest bit was that once you’d started your turn, you had to complete it till the song ended.
When I was six I started primary school. My parents decided to send me to the local school in Pontemammolo as it was easier for my mum to take me there or fetch me home. There were afternoon shifts at the time as there were not enough classrooms for all the children. Most schools alternated morning and afternoon shifts: that is classes attended school either in the morning or in the afternoon taking turns. If I had the afternoon shift I used to go to the nursery school with my mum in the morning, stay for lunch (which was delicious: great minestrone and risotto we ate from bowls; sometimes I helped the cook and the dinner ladies, who were big, round and chatty with huge white aprons). Then I walked to the primary school along an uneven road, more a wide path actually, with gardens full of roses in spring on one side and run-down four-storey buildings on the other side. My mum said that people squatted there and that they should have left because the buildings were unsafe. I thought those constructions were not so bad from the outside and probably some of my school friends lived there. In the video clip my dad made of my first day of school, I rush towards the school entrance without looking back, wearing my dark hair in a tidy pony tail, the white smock  with its blue bow and carrying a big satchel. 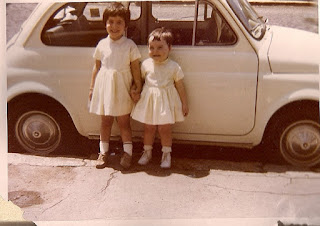 I have great memories of my primary school years. My teacher was a middle aged lady with curly brown hair and stern eyes. I adored her. She was strict and probably had an old fashioned teaching approach but I thought everything she did and said was gospel. She had a wooden stick she struck our hands with if we did something wrong or didn’t learn our lessons properly. I tasted it on my palms once when I made a hole on my book by rubbing it too hard to erase a mistake. Looking now at what happened it seems outrageous but at the time I thought it was right and learned my lesson.
My best friend and I were both daughters of teachers (her mum was a primary teacher at the same school) so we were considered privileged pupils and had to get the highest marks. Some of my other school friends were from poor families. For Christmas the school gave them new shoes and once one of the girls, who had beautiful long blond hair, had it cut very short; I still wonder if her parents sold it. 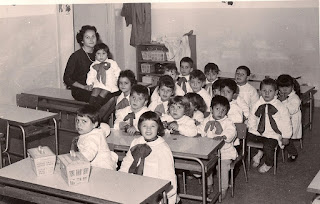 When I was eleven my parents moved me to the state middle school in our catchment area (and  where they still live), a busy middle-class area. It was a shock for me. From the protected, relatively small community I grew up in where everybody knew me, I was suddenly thrown in an unknown, crowded, mixed world where nobody cared (starting with the teachers) and everything was confusing. In Italy if a student doesn’t reach a minimum level, that is a C or a D in all the subjects, they can be kept for one or even two years in the same class. One third of my class was made up of these older students who knew everything about smoking, drugs and sex. One of them had a boyfriend in jail and most of them chatted during the lessons ignoring the teachers, who ignored them. A lawless world compared to the one I had been used to. I felt lost at first, then got used to it. It was a hard time, luckily lasting only three years. I didn’t do brilliantly, but I survived.


Next week: my time at high school.