I read some unforgettable books in the last few months, here are some of them.
My favourite one was The Blind Assassin by Margaret Atwood (Virago, 2009), an incredible six-hundred page engrossing story about two sisters, Iris and Laura Chase. In the background the period between the two wars and after WW II. Different plots interweave making the book very gripping. For example the world of Sakiel-Norn in another dimension of space, it is an extreme vision of our reality where wealthy ruthless people rule and poor semi-slave children, who are doomed to all kinds of exploitation and abuse. A tale told by a mysterious lover to entertain his mysterious mistress after making love in grimy bedsits. The story of the Chases is paramount in this book, we know since the beginning that Laura has a fatal car accident, probably a suicide, and that Iris’ husband and Iris’ daughter are dead as well, but nothing is spoiled. The magic is that we don’t realize almost till the end if everything is happening by chance or if there’s someone leading. It’s like a detective story. The blind assassin is revealed only at the end, it’s unexpected, a cunning, though emotional and passionate character, capable of profound love and terrible vendetta. Vindication seems the major theme of the book, a constant effort to state the right version of the story, to convey a truth that is also a revenge for the wrong doings of others. 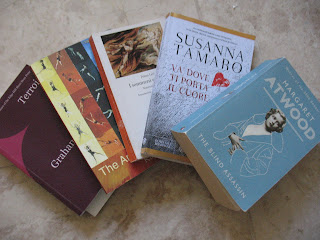