When I was in Italy during Easter holidays I watched some new Montalbano episodes, which will probably reach the UK shortly. The actors are the same of the first Montalbano (not the young one), that is Luca Zingaretti as the inspector, Cesare Bocci as Mimì, Peppino Mazzotta as Fazio, Angelo Russo as Catarella. They look a bit older, of course, some fatter (Catarella), others strangely skinny (especially Mimì and Fazio) and consequently quite wrinkly. There is a new Livia (Montalbano’s eternal fiancée), very fit and thin, and with a more defying attitude, which is nice. All the rest is there: beautiful sea, sunny weather and complex plots full of Mediterranean passion. 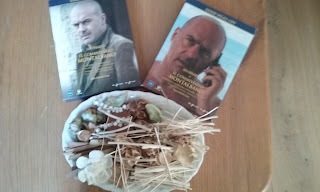 In the following paragraphs there will be spoilers about the episodes, please stop reading if you don’t wish to know what happens. I found some of these new episodes definitely harrowing with an uncomfortable stress on sex. I can understand that Camilleri’s aim (Andrea Camilleri is the author of the detective stories the TV series is based on) is to reveal prostitutes’ exploitation and sexist behaviour, but I think the film may provoke exactly the opposite effect. Sex is very much stressed in these episodes with long shots that linger on photos of naked women and on rape scenes. Party rapes and tortures of young and beautiful Eastern girls are not just hinted, we can see them naked, bruised and bleeding for a while on the screen. I watched it on the computer and I wondered at what time it was broadcasted on the Italian channels, hopefully after 10 pm, which is unlikely considering its popularity across all age groups.

Honestly I was very disappointed, I enjoyed very much all the previous Montalbano series and sometimes watched them twice or three times, but not these last ones. Besides the porno shots, I hated two scenes in particular. One is a long first scene of a dying naked young girl stabbed in the stomach who manages to get on a car and drive till a friend’s house, where she dies. She is agonizing, her body covered only by a rag she holds against her belly, it is excruciating and outrageous to see her in such conditions and for such a long time.

The other thing is something Montalbano says in one of the films. It is the story of a loan shark and womanizer who pays and blackmails young girls to force them to be his lovers. He takes and dumps them as he pleases and among them there is also his daughter, his lifetime lover, who is apparently crazily in love with him. His last lover agrees to be with him on the condition that he pays her university fees, therefore managing to retain some power in the relationship. She is the only one who is not a victim, is not frightened or subdued and is in control, geting what she wants from him. And what is Montalbano’s comment about her? “She’s just like him”, he says, meaning she is like the rapist, womanizing loan shark guy. Unbelievable! This is very sad and disappointing. The daughter instead, who was so jealous of her father’s new lover that kills him and then commits suicide, is the one who really loved him, according to Montalbano.

Dear Montalbano, there must be something wrong because I don’t get it this time. I hope the BBC will cut or shorten some scenes and lose some sentences in translation.