Some exhibitions I visited at the British Museum

My husband and I are members of the British Museum and I am a member of the V&A as well. Needless to say, one of our favourite places to visit are exactly museums. 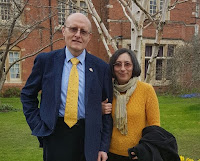 Since last year we have popped into the British Museum several times at weekends and enjoyed all the temporary free exhibitions, as well as the more important ones. 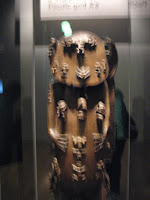 We could admire an incredible sculpture of a god from the Polynesian island of Rurutu called A’a with the aspect of a human being: a broad smiley face holding his hands on his belly. The nose, mouth and ears were made of small figures. It probably represented fertility and had a cavity inside where reliquary were kept, like feathers and human hair. It was handed in to missionaries by the natives who decided to convert to Christianity after a period of disease and decline of population in 19th century. Apparently two great artists like Picasso and Henry Moore owned a cast of A’a. 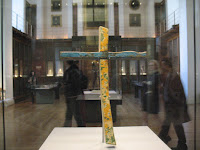 I could also see the Lampedusa cross, made in Italy in 2015 with the wood taken from a wreckage of a boat used to transport refugees and immigrants from Africa to the Italian island of Lampedusa in the south of Sicily. It was made by Francesco Tuccio, a carpenter from Lampedusa. In its simplicity it definitely expresses the unpretentious commitment of the people who try to help refugees as well as the profound sufferance and hope of those who come to Europe fleeing persecution and hunger.

In the Prints and Drawings room there were the watercolours of Rome by Francis Towne who visited Rome and its surroundings on several occasions to complete his series of pencil sketched watercolours of Roman ruins and the landscapes around Rome in the late 18th century. The works represent the wild and luxurious countryside around Rome, the banks of the Tiber, several important monuments like the  Colosseum, the Baths of Caracalla, the Palatine Hill, the Forum of Augustus and the so called temple of Vesta as well as some pictures sketched in Tivoli and Naples. His drawings are neat and precise, the colours are delicate and though sometimes he depicts dramatic rocks and invasive vegetation, his works remain rigorous in the detailed structure and sensible in tone. 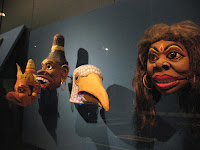 Just near the Prints and Drawings room there are the rooms dedicated to Asian art. Krishna in the Garden of Assam was centred on a textile from Assam, a region in the north east of India. The textile is associated with the worship of the Hindu god Krishna and decorated with scenes from Krishna’s life. Krishna was evidently a hero whose deeds still inspire stories and performances. For example he subdues the serpent demon Kaliya and meets other demons like the Crane demon and the demon Putana. The textiles is made of twelve silk strips sewn together where the same scenes are repeated several times. Their aim is to teach the life of Krishna and inspire unconditional devotion to this god. Though the original textiles were produced in Assam, none of them survived because they were reused. The ones we can admire today come from Tibet, Bhutan and even Wales.

In the same room, some months later, that is just before Christmas, there was an amazing display of shadow puppets from Indonesia, Malaysia and Thailand. Shadow puppets are made from animal hide (buffalo or cow), the outline is drawn on it then cut or punched out. Finally it is painted and rods are fitted on the back and attached to hands and legs. More modern puppets were displayed as well made of coloured plastic and with a contemporary flavour, like the Wayan hip hop one. Similarly to all puppet theatre all over the world, shadow puppet theatre tells stories linked to legends or folktales, ordinary events of life or myths involving gods and the spirit world. Among the beautiful puppets on display, there were human gods and demons but also animals and cracking clowns. A magic world.
At the same time, Maggi Hambling’s charcoal, graphite and ink works were exhibited in the adjacent rooms. Her work is so strong, dynamic and sensuous, sometimes slightly destabilizing, just like her words: “I try to distil the essence of the subject and capture the life force of a moment...the challenge is to touch the subject with all the desire of a lover.”

Another amazing exhibition we visited at the British Museum was Sicily, Culture and Conquest. It focused on two main historical periods: 734 BC when Greeks arrived, and the Norman period, 11th century. The strategic position of Sicily in the middle of the Mediterranean sea and its fertile soil attracted settlers and conquerors who gave a cosmopolitan flavour to the island. The Phoenicians arrived in 800 BC, then the Greeks, the Romans, Byzantines, the Arabs and the Normans. In Palermo you can find the unique Arab-Norman architecture, a wonderful synthesis of two cultures we sometimes consider opposite. The Arabs introduced crops like oranges, lemons, sugar cane, rice and cotton as well as scientific innovations. The texts of Plato and Aristotle survived in the Arabic version and were then translated into Latin. Though the different populations that settled in Sicily were culturally diverse, they lived peacefully most of the time but didn’t completely integrate or develop equality.  Sometimes Muslims were attacked and the descendant of Greeks became serfs. It was a complex, intricate and rich reality, hard to grasp completely but always interesting to peruse. 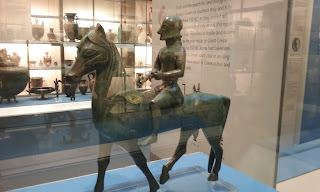 Sunken Cities was the other great exhibition we visited, it was about two Egyptian cities that were submerged about 1300 years ago by tides. The remains testify the interaction between ancient Egypt and Greece. The big difference between the two cultures was their worshipping, Greeks worshipped human-shaped gods while Egyptian gods had animal features. After Alexander the Great conquest (332 BC) the names of the Egyptian gods were translated into Greek and adapted to the different mentality. Two beautiful sculptures, one of Arsinoe (sister-wife of Ptolemy II) in dark stone showing an Egyptian posture and Greek drapery, and a magnificent Apis bull dedicated by the Roman emperor Hadrian to the temple of Serapis in Alexandria, testify the mixture of the two cultures.

Another interesting display I enjoyed was the Japanese porcelain Kakiemon produced by the same family for four hundred years. They developed a pioneering overglaze technique applying enamel colours on a glazed porcelain surface using bright orange-red, the colour of the persimmon fruit, kaki. The pieces on display were exquisite with some lower examples of copies made by Chinese and European porcelain producers. It was easy to detect the difference in quality and skill.