Some exhibitions I visited at the V&A

I usually visit the V&A with my daughter as we are both deeply interested in art, fashion and design. Every visit is an experience of aesthetic pleasure and a source of inspiration, especially for her as she is graduating in Fashion and Design. 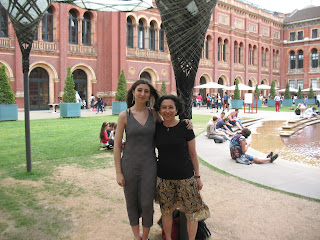 Several aspects influenced the changes through centuries, like modesty, cleanness, comfort and the wish to mould the wearer’s body according to the fashionable ideals of the time. This is evident in the use of stays and busks in corsets to support the breasts or shape a tiny waistline. Sometimes this obsession of an ideal body could be extremely painful, like in the 19th century fashion, other times it was looser, e.g. when ribbon corsets were allowed in summer. Near to the present days girdles were on display, reminding me of the stocking belts I found in my mum’s drawer when I was a teenager, dating back to her youth when tights were not available yet.

Opus Anglicanum, English work, was about embroideries on copes, stoles, chasubles and dalmatics made in England, mainly in London, in the 13th and 14th centuries. The figures were realistically depicted in intricate and sophisticated patterns, highly detailed and richly decorated in gold, silver, enamels and pearls. The kind of iconography was typically medieval among Celtic foliage style patterns. The reputation of the Opus Anglicanum was international together with other famous fabrics produced in Bologna, Rome, Namur, Velk and Toledo. The display looked shimmering and exquisite though worn out by time, which gave an idea of how astounding they must have looked at the time.

You say you want a Revolution? Was on at the same time. The title intriguing in itself, unclear if it was a rhetorical question or was issuing a challenge. It was about the late 60s (1966-1970), idealistic, revolutionary, colourful and psychedelic, which can also mean ‘mind-revealing’. It was a very

entertaining exhibition mainly due to the sort of audio-guide they gave you at the entrance. It played noises, music, speeches and songs of the time according to the different sections you passed through, reflecting and completing in words and sounds what we were looking at. I was born in the 60s and it seems all so far away now, exactly a museum piece.

When I was in Rome at Christmas and Easter, I visited a few exhibitions as well. Artemisia Gentileschi e il suo tempo (Artemisia Gentileschi and her time) was at the Museo di Roma (Museum of Rome), an impressive exhibition on the greatest female Italian painter. She was the talented daughter of Orazio Gentileschi, who was her first master. As it often happens with women artists, her work was neglected and undermined while her sensational

biographical events became paramount. She was a renowned painter but died poor and her work was forgotten while her fame of indecent and dissolute woman stuck.

She started painting from a very young age showing a great talent that her father supported. She was raped when she was sixteen by Agostino Tassi, a painter who worked with her father; the rapist was later sued and sentenced, but Artemisia was never completely believed. She married Pietro Antonio Stiattesi and moved from Rome to Florence where she worked for the court of Cosimo II. After a while she divorced as her husband was squandering her money. Her work took her to Venice, Genoa, Naples and at the Royal Palace in Greenwich. Her paintings were definitely influenced by Caravaggio in the first place, but also Rubens, Cigoli and Van Dyck. The first decade of the 17th century saw a flourishing of decorative paintings in Rome under Pope Sisto V in the churches of Santa Maria del Popolo and San Luigi dei Francesi (Caravaggio), San’Andrea and San Gregorio

Magno (Guido Reni and Domenichino) and in Galleria Farnese (Carracci). Artemisia probably met Caravaggio, nevertheless, her inspiration went beyond contemporary masters, the way she shaped the bodies in her paintings reminds of Michelangelo’s dynamic energy and plastic figures. Her attention to details (a wisp of hair on the cheek or dimples on a hand) in depicting Madonnas shows her originality and expertise. Among her most famous works are Susanna and the elders, some Madonnas with Child, several versions of Judith and self portraits. It is interesting the fact that she gives her own features to her heroines, especially to Judith. Other important works are Cleopatra, Lucretia and Mary Magdalene penitent, where the sensuality of the body, in Cleopatra, and the richness of panneggio, in Mary Magdalene, testify her mastery and originality in interpreting the characters. Her heroines are never stereotypes, they are complex, dramatic and in control, living their moment in full.

I also visited the exhibition of Giovanni Boldini, an Italian painter who lived most of his life in Paris during the Belle Époque. His life size portraits of beautiful aristocratic women were famous and can be found in most Modern Art Galleries around Europe. He expressed the beauty, elegance and joie de vivre typical of the time, with all its vibrancy, dynamism and instability, well depicted in his flowing, sketchy style. Some of the portraits were astounding, though sometimes too similar to one another, my favourite were the still life of pheasant and flowers with impressive use of colours that mould the objects, and the portrait of Giuseppe Verdi (the best one is at Galleria Nazionale d’Arte Moderna, the National Gallery of Modern Art in Rome). 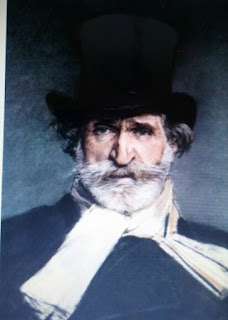 Back in England at the Lightbox in Woking, I could see a wonderful exhibition of Henry Moore (Henry Moore, sculpting from nature) and attend an event with Mary Moore and Peter Murray in conversation about the artist’s life and work. There were interesting scale models, drawings and etchings and full size monumental works as well. Video clips were on show before entering with interviews to the artist. 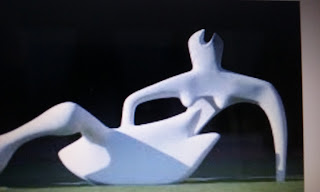 His idea of sculpturing was an amalgam with the landscape, as it clearly happens at the Henry Moore Foundation in  Hertfordshire. His sculptures are classical, monumental and are part of nature as well. In fact he thought that the best place for a sculpture was not a square or in front of a beautiful palace but precisely in the landscape. His inspiration were past masters, like Michelangelo, as well as shapes from the natural world, like bones, shells, flint stones and plants. This merging of the human body with the landscape and the detailed observation of parts of it make his work so unique. Examples are in his hieratic sculptures of mother and child (a form inside another that creates a whole) stretching, reclining and merging with the landscape. Or in his exploration of an elephant skull where he finds new landscapes inside the structure of the bone. The shapes are explored in their inner parts, e.g. the labyrinths inside the skeleton, the secret passages, the holes. This evokes new perspectives and new imaginary worlds.

His daughter Mary spoke of him as a very generous and approachable person who mostly worked at home drawing whatever he saw. She realized her father was a famous artist because important people came to their house, Rothko came for tea once and Botero and Marino Marini visited them. For him it was important to study sculpture at the British Museum, for example, in a time when visual images were not available everywhere as it is nowadays. She also said that her father was able to express a psychological form in sculpture effortlessly as it was already inside him, something he understood profoundly and shaped in a personal cutting-edge style. He was undoubtedly a great artist.

In Rome my husband took me to see one of his favourite places, the famous Galleria Prospettica (forced perspective gallery) built by Francesco Borromini at Palazzo Spada. It is in a courtyard with a small garden, a magic place where the impression is created by one vantage point and by the lowering ceiling and the rising floor. Looking at it we imagine it is very long (about 30-40 metres) but it is actually only 8-9 metres long. The illusion had both a moral meaning, the deception of worldly matters,  and a more profane aim to surprise and entertain the viewer, a bit like a mirror maze or other today’s interactive fun things. And there was a very fat cat strolling casually along the gallery and posing for photos.