The process of my daughter’s graduation lasted a few months for me, that is from January, when she started to work on the making of her collection of six outfits, till the graduation day on 4th July. 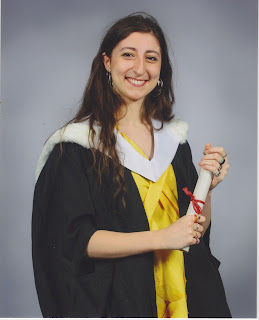 The preparation of the outfits was long and intense. We went together to the textile shops in Berwick street several times before she could find the right fabrics and when she finally made up her mind, some of them had run out. Making her models was not just a matter of cutting and sewing, first she had to dye and print the material, then make the patterns, cut them in the fabric, sew the outfits and finish the whole thing, in her case with embroidery. It had to be perfect in every detail. She also made some knitted tops using a knitting machine. Moreover, she had to complete a design book that testified her research activity and they also asked her to prepare the program for the final catwalk.

Living in Surrey and being so far away from Scotland we felt unable to help her, except for giving our support by phone. We called regularly and tried to help her cope with the inevitable setbacks that always occur. What worried me more than anything else was the general tendency of the students of colleges of art to work day and night (especially at night) when deadlines approach. I know now that she slept only a few hours per night for weeks, and some nights she didn’t sleep at all in order to complete her work. Luckily, she is a strong healthy girl and survived the ordeal brilliantly. I’m sure she enjoyed the job as well. 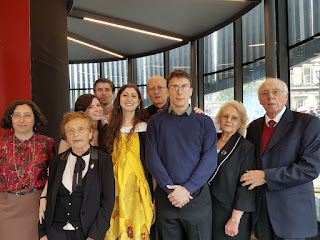 I attended the end of year catwalk as usual in May. This time it didn’t take place at the College of Art, as it was in the previous years, but at the National Museum of Scotland in a beautiful hall where the models walked along a meandering corridor flanked by the audience. It was awesome. There were seventeen graduating students exhibiting their final collection, as well as students of year one, two, three and the MA course, all the pieces were original and accurately made. My favourite one was my daughter’s collection, of course, but there were a couple of others’ I liked too.

My daughter’s collection was inspired by Japanese culture and art and also by Italian tailoring. To make her background clear, she added pictures of ordinary Italian people, e.g. elderly women, and some monuments like the Roman Forum, and film stars like Alberto Sordi and Anna Magnani.

Afterwards there was Graduate Fashion Week in London, where almost all the Fashion Design and some textile courses of the UK exhibit and promote their work. Each course had a catwalk, with three or four catwalks a day, as well as the Gala on the final day, featuring the best works across all collections (selected by judges in the audience). The Gala featured 20 or 25 collections, with awards given at the end. The University of Edinburgh had five students selected for the Gala night and obtained several awards, my daughter was one of them. It was so emotional when she was called on the stage to receive  the Womenswear Award sponsored by M&S that I couldn’t restrain my joy and started to shout: brava! She did so well and we are so proud of her.


In July there was the graduation ceremony. My parents in law and her godmother flew from Rome to Edinburgh for the occasion while we travelled north from Surrey. The day of the graduation was rather cold and rainy, unfortunately, but we enjoyed it thoroughly all the same. The ceremony was at McEwan Hall, an impressive edifice just restored. We took photos sheltered inside a nearby building and had a long delicious lunch at Ciao Roma, an Italian restaurant serving superb food and award winning ice-cream. 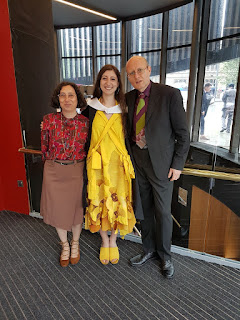 The night before going back home, we decided to set up the dinner in the kitchen my daughter shared with other students in the student halls she lived in near the College of Art. The place was rather grimy with overflowing bins and heaps of recyclable rubbish, but no one had thought of disposing of it. The grandparents and the godmother’s reaction was a frantic tidying up to clean enough space to have our dinner. At a certain point a girl entered the kitchen to make a cup of tea, she was barefoot and moved around the filthy floor casually. I noticed a horrified expression on the Italian guests’ faces.
After dinner, it was time to pack up my daughter’s stuff as she was leaving with us for good and all the following day. It took the full family to team up and work relentlessly until past midnight to complete it all, but we managed eventually.

On her graduation day my daughter wore one of the dresses from the collection under the black gown, a bright yellow dress with printed ginkgo leaves she designed. It suited her so well, she looked charming and professional.

The whole event was an extraordinary magic experience. 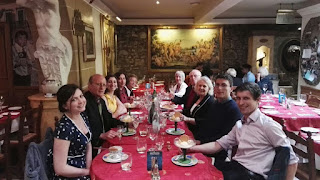