It was such a busy exciting summer I am relieved it is over, in a way, and we are back to our safe routines. I was at home most of the time but the schedule was packed.

My mum came from Italy in June to attend my daughter’s catwalk at London graduate fashion week, after it there was my daughter’s graduation (Fashion and Design) at the beginning of July in Edinburgh. Then my mum had an operation, a shoulder replacement, in Woking and after three weeks there was my son’s wedding at Samlesbury Hall near Preston. Family and friends came and went from Italy throughout summer. In the meantime I worked hard on my PhD research as I need to start to submit some work from September. From time to time I managed to attend some concerts, exhibitions and shows in London and nearby, and also did some cooking and other stuff with my mum and my daughter.

My mum’s operation wasn’t a picnic. She had no choice but do it as her shoulder’s tendons were completely worn out and it was very painful for her to move her right arm. Three months after the operation she should be able to use her arm again in a normal way without any pain. She is still recovering at the moment but got rid of the sling after four weeks and is able to prepare some cooking and to do some crochet. I can see she is improving a little bit every day though she says it is still painful sometimes. I helped her wash herself and get dressed in the first four weeks but she is such an independent brave person that she did as much as she could by herself.

We attended a concert together at the Southbank Centre in June, the Rachmaninov piano concerto no. 2 and Shostakovich Symphony no. 5, definitely powerful dramatic pieces that don’t let you a minute of rest, romantic at times (Rachmaninov) but also unsettling and frightening (Shostakovich).
I was flabbergasted by a previous concert I attended in May with my husband, featuring Beethoven Symphony no. 7, a masterpiece. Though my favourite classical music is Opera, above all Verdi, Bellini and Donizetti, I can’t help acknowledging that Beethoven is one of the best composers ever, though he is not Italian. The richness, variety and vitality of his music are unique.

We also attended An American in Paris at the Dominion Theatre. My mum and a friend of hers had the lucky chance to watch the show sitting at the Stalls while the rest of us were up in the Circle. They gave them this opportunity as there wasn’t a lift to the Circle section. The music was fantastic, I love Gershwin (not just An American in Paris), the way he evokes his experience in Paris, the street noises, the energy, nostalgia and the passion for life he expresses all wrapped in a hopeful and triumphant atmosphere. The musical also features other Gershwin songs, like I got rhythm, I’ve got beginner’s luck, The man I love, Who cares?, But not for me, etc., building up an improbable romantic story that slightly contrasts with the apparently nonchalant casual tone that his music communicates. It involves the listener temporarily in a wonderful dreamy world, but it is clear it’s only for a while, a short while. Enjoy it till it lasts, it seems to say. The singers and dancers were great and I enjoyed the show thoroughly, especially the scenery’s wow effects towards the end.

My mum likes attending the Italian club in Maybury (Woking) where she plays bingo and meets elderly Italian ladies who moved to England in the 50s and 60s. She meets them at the Italian mass every Sunday at St Dunstan’s as well. We also attended the famous procession of Madonna dei miracoli (Our Lady of Miracles) around Maybury, an interesting experience that brought me back to my Italian background and religious faith. The people of the Italian community are all very nice and welcoming, some of them can still speak and understand Italian so my mum feels at home with them. I must say that the people in the cars we encountered during the procession looked at our snake-like parade with a mixture of surprise and fun, not fully sure of what was going on. We must have looked very exotic. Everything was very well organized, the priest’s prayers and instructions were amplified along the queue, people in charge told us where to turn and when to move on or stop. The statue of the Madonna is moving with her caring expression, rather firm if looked at from afar, and figures of people in need around her. It appeared in the stendardo (ensign) and in the priest’s chasuble as well in exquisite embroidery.

My mum and I entertained ourselves by experimenting with old and new recipes (which I am going to publish on this blog in the following weeks) and celebrated my family’s ten years in the UK with special cakes, fruit pies with the colours of the Italian flag and of the British flag, a delicious treat that disappeared in a blink of an eye.

My mum also helped me embroider two shawls for summer before she was operated and we are planning to make some new dresses with beautiful pieces of cloth I found on sale in Berwick street, Soho. But she needs to recover completely to give me a real good help.

My work on intertextuality is digging deeper and deeper. The more I read Julia Kristeva, Bakhtin, Michael Riffaterre, Derrida, Barthes, John Barth, Linda Hutcheon and other literary critics , the more I realize the importance of the reader in the production of a text and the pivotal influence of intertexts in the understanding and interpreting process. A tough work that implies wide reading and serious literary analysis.

I couldn’t miss A quiet passion, the film on Emily Dickinson’s life. She has been one of my favourite poets since my university years when I found a selection of her poems with facing-page translation on a book stall at the university La Sapienza in Rome. I go back to her work from time to time always finding new implications. I have her complete poems edition, of course, and while I was tidying up my room this summer I also found a tiny book of her poems my father gave me years ago, probably as a present coming back from one his trips with my mother. It is a dear object that testifies my father’s understanding of my interests. I liked the film very much as I think it recreated the setting and the mood of the Dickinsons and of their time. Nevertheless, I believe it should have explored other sides of her poetry and of her life, though it was apparently a quiet, almost secluded life, but with complex inner aspects. The film shows mainly her spiritual side and her love for her family, which are true, but minimizes her passion for nature and her eroticism. Another aspect I often find in her poems is the development of a philosophy of life expressing opinions on human conditions and giving her point of view on existential questions, a perspective I consider engrossing, still fresh today and worth exploring. 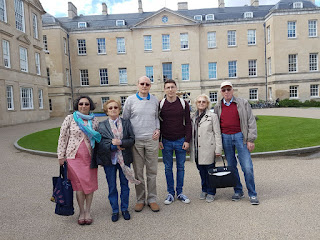 Last but not least, my mum and I had some lucky picks at charity shops where we often go hunting. I also coined a new word on the subject: charitare, according to our Italian way to add the suffix –are, the first conjugation of Italian verbs like in mangiare (to eat) or giocare (to play). I also heard of ‘parcare’ (to park) as well as mixing English words in an Italian conversation, a habit Italian people who have been living out of Italy for decades have, as the English words come first in our minds.

Finally we went sightseeing in Oxford when my parents in law were here. My son, who studies in Oxford, gave us a guided tour around the Colleges. I rediscovered parts of the historic university town I hadn’t seen since the first time I visited Oxford ages ago, in my twenties. It was a pleasant revisitation.

My son also had a great idea, he volunteered to take us on a punt on the river Cherwell. It was a gorgeous sunny day on the last bank holiday of our hectic summer, a worthy way to celebrate all the stirring events we went through. He skilfully manoeuvred the long pole like an expert gondolier while my daughter helped him with a paddle, if needed. Surrounded by fresh air and ducks gliding on water with the little ones close behind, we had perfect relaxing moments just before starting the new school year.