During the Easter holidays my husband and I planned to spend a few days in Florence, a holiday we had planned for a long time. I had been there on a school trip and with my mum and dad when I was a teenager. I knew the main spots to visit and made a list for my husband who was in charge of organizing the tour. 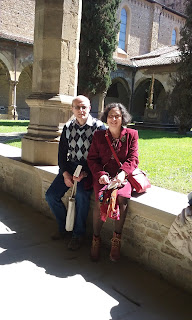 Compared to Rome, Florence is smaller and rather consistent in its architecture. The most important art sites (mainly churches and museums) are at walking distance in a centre that developed from the early Middle Ages to the 16th century and was maintained almost intact until today. This gives the sense of being immersed in a Renaissance atmosphere where the edifices and the maze of streets and shops are in harmony with human perspective. Or so it makes you believe, considering the artificial essence of the concept of perspective itself, which was refined by one of the major artists of the Renaissance, Filippo Brunelleschi in the 15th century. It is a beautiful illusion to wander into, through the well-kept lanes dotted with elegant shops, which continue the renowned tradition of Florence as a place of art and fashion, reassured by the casual efficiency of the locals and spoiled by the fantastic food.
My husband planned the visit carefully guiding me from one place to the other with the competence of a professional tour guide.
We visited almost everything, the weather was sunny and warm, except for some drizzle on the last day, and we rarely queued, as we had priority to all sites with the Firenze card (for € 85 you can visit everything in Florence for seventy-two hours, http://www.firenzecard.it/index.php?lang=en ), which saved us money and time.
Florence economy flourished from the 11th century on and mostly developed from 13th to the 16th century thanks to the skill of its artisans, the manufacturing and commerce of textiles, especially wool, and above all for the ‘invention’ of what we call today finance and banking. A solid middle class was the backbone of the city since the Middle Ages. People immigrated to Florence from the countryside and its population reached a hundred thousand inhabitants in 1300 when Rome had only thirty thousand and London fifty thousand. 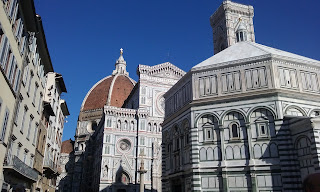 The Medici family, who ruled the city for decades, based their wealth on banking and had their branches all over Europe. Lending and investing money was their thing, which produced personal but also public prosperity. In fact, they enhanced their reputation using part of their money to fund and support arts, which became Florence’s trademark as well as part of its distinctive identity. For this reason, treasuring the art heritage has always been a major goal of all governments, guilds, unions and companies that succeeded and contributed in ruling the city.
In spite of civil and national wars (famous the one between Black and White Guelphs and the skirmish with Popes in the Middle Ages, Dante was one of the most famous victims of these turmoil) and floods (the 1966 one provoked great damages and was a real shock for the city), Florence looks well preserved, ordered and decorous like an mature guy who keeps fit thanks to constant exercise, healthy food, sunbathing and well-tailored clothes, an equivalent of George Clooney, so to speak. 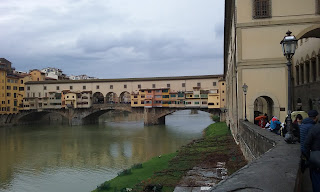 We travelled through its splendid art from Uffizi to Bargello, Pitti, Santa Maria Novella and Santa Croce, Cappella Brancacci and Bardi, flabbergasted by the beauty of its well-proportioned spaces, splendid paintings and graceful decorations.  I revisited the major steps of Italian art from Cimabue to Giotto, whose frescoes in Santa Croce express such a dramatic force in contained majestic volumes; then Paolo Uccello’s intriguing paintings of Chiostro Verde in Santa Maria Novella, his disturbing almost contemporary figures of The Flood detached from one another, fighting alone against death as if destruction is the consequence of isolation.
Seeing the David by Michelangelo in Accademia was very emotional, it was almost a revelation. The David is not total perfection, the hands and feet seem too big, but its confident and effortless attitude not only stresses its beauty but above all its power to win by just being. 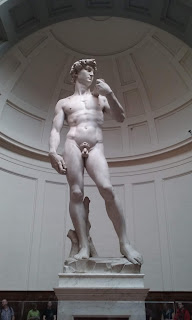 I couldn’t miss Masaccio in Capella Brancacci and in Santa Croce, his Adam and Eve, the Tribute money and the Trinity, forerunners of the works of Michelangelo and Leonardo in the use of perspective but above all in the narratives, show a juxtaposition of volumes and highlight the dramatic interaction of the characters. It is an incredibly innovative way of visualizing stories compared to his contemporaries, like Lippi and Masolino, whose works seem too crowded and static.
I loved the Madonnas by Luca della Robbia, which show different expressions and attitudes one from the other. My favourites were the sublime frescoes by Beato Angelico at San Marco. His work is apparently simple in rendering the complex pain of human involvement in the stories of the Passion of Jesus where the human side struggles with the divine acceptance of sacrifice and death pointing to resurrection. It seems an unresolved dilemma in his paintings that conclude in the dazzling light of the transfiguration and in the repetition of the crucifixion stressing the unavoidable core of sufferance in human life. Then the greatest ones: Raffaello, Leonardo, Michelamgelo, Tiziano, Caravaggio…I was overwhelmed by such a profusion of beauty.
We also visited a modern art exhibition, Dawn of a Nation at Palazzo Strozzi, and Salvatore Ferragamo: Return to Italy, which I reviewed for London Grip ( you can read the review here: http://londongrip.co.uk/2018/04/in-search-of-an-italian-identity/).
I took a lot of pictures with my mobile phone, so easy and handy compared to a camera. I remember a time when taking pictures was forbidden in most museums and viewers used to stare for some minutes at a paintings trying to memorize the masterpiece. Now we have a glance at it and take a shot, you can look at it afterwards again. 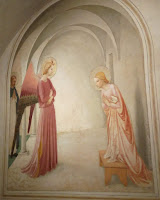 I also read a book about ‘la vestaglietta’ (hooverette or Hoover apron, a house dress), by Elda Danese, I bought at the Museum of Costume and Fashion, Palazzo Pitti. It was very interesting to realize that this cheap item of cloth (‘vestaglietta’ is a diminishing term from ‘vestaglia’, a robe) worn by lower class women at home, became a fashion icon with sensual undertones in the 70s. This happened thanks to the interaction between different social levels and to a freer woman’s condition. It is a protean item that changes its shapes and texture according to the different context. The fabric can be jersey instead of cheap cotton, the printed patterns become more sophisticated, geometric instead of floral, or it can have frills and trims. It appears in films, like Riso Amaro (bitter rice), directed by Giuseppe De Santis, and Ossessione (obssession), directed by Luchino Visconti, with erotic implications and becomes a wrap up dress or a chemisier in haute couture. It combines elegance and comfort, social and intimate spheres, freedom and constraint, conveying a potentially explosive mixture of domesticity and sensuality.

At the market we bought some local products, like olive oil, cheese, cantucci and a local speciality: pici cacio e pepe, a mixture of spices with whole pepper grains to season ‘pici’, which are a sort of handmade bucatini. A challenge even for the toughest lover of spicy food.


Last but not least we had some fabulous ice-creams at Carraia ice-cream parlour with flavours I had never tasted before, like white chocolate and pistachio sauce, ricotta cheese, panna cotta with chocolate wafer, variegated passion fruit, cheesecake or tiramisu mousse.  We opted for the biggest, most expensive cones each time we visited.
It happened I visited Florence again in June with my mum, who wished to see the Uffizi Gallery. We booked two nights at an Airbnb with a fabulous view of Brunelleschi’s Dome and the roof tops of Florence. The pace was slower this time but I could revisit the main sites and have a better look. Florence never gets old.