New pasta and cake recipes for the autumn 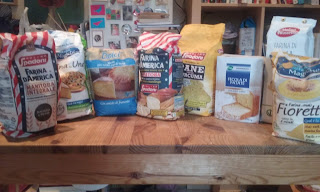 My mum and I experimented extensively during summer and autumn time twisting traditional recipes and creating new ones. We also made different kinds of bread with intriguing flours we found on supermarket shelves both in Italy and in England, like Manitoba flour (from a region in Canada, in English it is called strong Canadian flour), curcuma flour (from turmeric, a root of a plant), soya

flour, pane nero flour (flour for black bread) and malthouse flour. I love making bread, it is easy and quick. You just mix the right amount of flour (500 g), dry yeast, oil, salt and lukewarm water (the ingredients and recipes are usually printed on the packet), and let it rest and rise in a warm place for two-three hours. It is like seeing something growing that once done and baked becomes food, basic food as bread actually is, a nourishing vital part of our life.

Here are some snug recipes for autumn time that came out particularly well.

You need: 300 g of black or brown rice (Thai black rice is a good option); for the tomato sauce you need: a can of plum tomatoes, one clove of garlic, extra virgin olive oil, some prawns, half an onion, a courgette, salt, pepper and basil.

Prepare the tomato sauce pouring some oil in a pan and adding the chopped plum tomatoes. Add garlic, salt, pepper and half a tsp of sugar. Let it simmer for half an hour then add some leaves of fresh basil and the prawns. Let it simmer for another half hour. A part prepare the courgette in a frying pan cooking the onion thinly cut in some oil first and then adding the courgette cut in cubes. When it is ready add it to the tomato sauce and mix. Cook the rice, drain it and season it with the tomato, prawn and courgette sauce.

You need: 300 g of potatoes, one sausage or some cubes of pancetta, 150 g of grated mozzarella, half a tsp of nutmeg, one egg, a tbsp. of breadcrumbs to sprinkle on top and some flakes of butter.

Peel and cut the potatoes in pieces. Cook the potatoes in boiling water, drain and mash them in a big bowl. Cook the sausage (or pancetta cubes) and peel it. Add the meat to the mashed potatoes together with all the other ingredients (except breadcrumbs and butter). Mix well till you have a smooth mixture. Spread the potato mixture in an oiled tin and make it even. Sprinkle some breadcrumbs on top and add some flakes of butter. Bake at 180° C for half an hour. You can serve it cold or warm.

Mix the eggs with the sugar and beat it. Add the melted butter and flours and mix well. Add the rest of the ingredients and pour the mixture in a greased plum cake mould. Bake at 180° C for half an hour or till ready. Sprinkle some icing sugar on top while it is still warm. 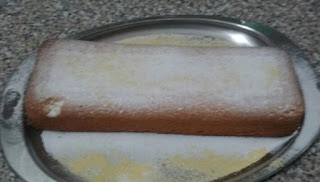 Focaccia with grapes or plums

For the dough you need: 500 g of Manitoba flour, a pinch of salt, 60 g of sugar, dry yeast, 300 g of warm milk.
For the filling you need: 500 g of black grapes or/and plums, four tbsp. of Demerara sugar, the juice of a lemon. Some flakes of butter and icing sugar to decorate.

Prepare the dough mixing all the ingredients and let it rest and rise in a warm place covered with a damp tea towel for two-three hours. Cut the fruit in pieces and add the Demerara sugar and the lemon juice. Divide the dough in two and roll it out. Line a rectangular greased tin with a dough sheet and pour the fruit mixture on it then cover it with the other dough sheet.  Make some holes on the top with a knife or a cutter and put some flakes of butter on top. Bake at 180° C for forty-five minutes. When ready sprinkle some icing sugar on top.

Whip the eggs with the sugar using a blender for 10-15 minutes. Add the other ingredients and pour the mixture on an oven tray lined with baking paper. Bake at 180° C for 15 minutes or till ready. Sprinkle some sugar on a damp cotton tea towel. Place the cake over it, lift off the tray and peel the paper carefully. Roll the cake in the tea towel and wait till it cools. Prepare the filling whipping the cream with one tbsp. of sugar. Add the maple syrup and the milk mixed with the cocoa powder. Finally add the crashed crispbakes and mix well. Unroll the cake and spread half of the cream mixture on it. Roll it again and place it on a tray. Spread the rest of the cream on top and shave on it some dark chocolate. Chill it for a few hours before serving.

This is a popular recipe I revisited. You need: 200 g of self-raising flour (or white flour plus half a tsp of baking powder), 50 g of caster sugar, two eggs, 50 g of butter, two tbsp. of milk, 50 g of dried cranberries, Demerara sugar, some liquor.

Soak the cranberries in some water mixed with some liquor. Beat the sugar with one egg for a few minutes, add the flour and baking powder. Soften the butter in the microwave for 30 seconds and add it to the mixture. Add the milk as well and knead the dough (if it is too sticky add some more flour). Roll it out and cut it in two parts. Drain and squeeze the cranberries and sprinkle them on one of the dough sheets then cover it with the other sheet. Cut rectangular shapes and set them on a greased oven tray. Beat an egg and brush it over the biscuits. Finally sprinkle some Demerara sugar on top. Bake at 180° C for 15-20 minutes. 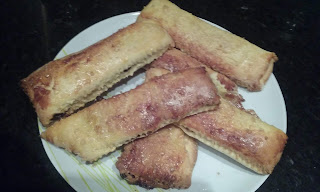