My mum and I enjoy art so much that we are thrilled whenever we plan to visit an exhibition. Here are a few ones we visited in summer and autumn enjoying every minute of our tours, discussing the artists’ works and highlighting our favourites. 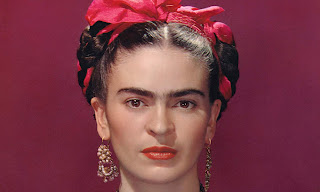 Frida Kahlo: making herself up at the V&A was inspiring. Before attending the exhibition, I had collected some pictures, fabrics and newspaper articles influenced by the Fridamania. I even bought a Frida inspired headgear for my daughter Valentina for Halloween. She loved it! Unfortunately, you were not allowed to take photos at the exhibition; it didn’t display many of her pictures, though, but mainly focused on her clothing and personal possessions, which had been sealed in the Casa Azul (blue house) for fifty years.


She considered herself a Mexican revolutionary, took part in rallies and joined the communist party. As a matter of fact, she was also part of the artistic movement that supported the revolution. The government recruited these artists to create new forms of art for the people. In this circle of intellectuals she met Diego Rivera, who became her husband. He was huge, both in fame and aspect as he was a big man and a renowned muralist whose fame reached beyond Mexico, instead she was petit and apparently vulnerable. Her parents said it was a marriage between an elephant and a dove. 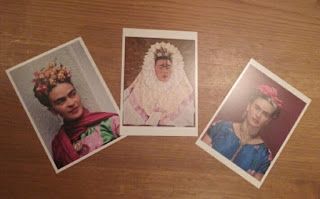 The exhibition encompassed all her life since childhood, starting from her mixed family, German father and Mexican mother, her sickness, she had polio when she was six, and the terrible bus accident that left her disabled and suffering of back pains for the rest of her life. The photo display went over the main phases of her living correlated by the objects that surrounded her and were part of her daily character, such as toiletries, jewellery, medicines, decorated orthopaedic corsets, and clothing. They show her ability to survive hardship, both physical and psychological, and her pride and commitment to Mexican culture and heritage. She publicly and daily exhibited her pride in being Mexican wearing traditional costumes with long colourful skirts, the rebozo (shawl), flowery

headdresses and necklaces she assembled from water-worn pebbles or beads and conch shells she found in burial sites. This testified a pre-Columbian indigenous heritage she merged with Christian and autobiographical elements, like the retablos, votive paintings, and pictures recalling her near-fatal accident or her stormy relationship with Diego. She created an image, a character she was faithful to until the end. It evoked a genuine, colourful indigenous world linked to ancient traditions and Mexican people, untouched by modern trends.

However, this also showed her constructed image she carefully created through her paintings and consequently her life, using the objects around her, which were suitably displayed at the exhibition. They are pieces of a collage that produce a narrative that repeats her story again and again. Her disability was part of this character, an important part that she transformed into an artistic product, for example in decorating her corsets and prosthesis and in some of her paintings and drawings depicting her injured back. This gave her the opportunity to explore woman’s identity as well; her fragmented abused body became a metaphor of woman’s split self, her ‘many Fridas’. It is difficult, maybe impossible, to distinguish her public from her private image, a concept the title of the exhibition underlined. It is an artistic self-creation played through art and in an exclusive artistic environment, a sort of ‘sanctification’ of art, not in a spiritual sense, but in the sense of a supreme example of artistic achievement. 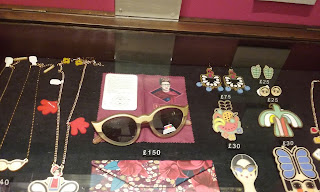 The exhibition also conveyed a sense of being in the presence of a collection of reliquaries as if Frida Kahlo spoke to us from the underworld (the soundtrack in some of the rooms suggested this sensation) staring at the viewer from her self-portraits. The complexity of her figure is fascinating, contradictory and almost mesmerizing. She merged vulnerable aspects connected with her accident and her sickness with her incredible determination and joie de vivre. She was injured but defiant towards adversities in a relentless endurance; for this reason and for what she achieved she deserves our admiration. 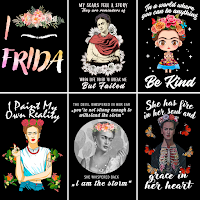 My favourite section was the luscious display of her outfits, so colourful, rich and varied (alas, I couldn’t take photos), and the pictures, of course. One of my favourite was her self-portrait painted in 1941. It is particularly austere if compared to other portraits, with her androgynous features highlighted in the strong nose, the marked shadows and the sober hairstyle, which reveal a specific side of her personality, or her image, fiercely independent and self-asserting. The other picture I particularly admired is ‘La novia que se espanta de ver la vida abierta’ (the bride who becomes frightened when she sees life opened), painted in 1943. Here the cut and opened fruit represent the openness to life but also allude to the sexual undertone of being ‘opened’ by the husband. Half hidden in the background, there is a blond doll in a white dress, maybe a diminished image of the bride, who does not look like Frida though, symbol of a woman relegated to a subordinate role. During her life, Frida’s role as an artist was subordinated to her husband’s, whose large and compelling works contrasted with her small detailed pictures which told her personal story, or her personal view, not the grand narratives of the nation. During her lifetime, she had only two solo exhibitions and her work didn’t sell well. With this exhibition and all the other similar displays of her work around the world, Frida Kahlo is regaining the place she deserves in the artistic world.

My mum and I also visited the Spencer Gallery at Cookham, a place I would like to go back to, in order to write a proper review on this incredible artist. I was flabbergasted by ‘Christ preaching at Cookham Regatta’ (1952-59), his last unfinished work. The figures are highly symbolic and commonplace at the same time, floating shapes in part playful, in part grounded in this world,

I loved his detailed portraits of Dr Osmund Frank (1950), Marjory Metz (1958) and J.E. Martineau (1955-56) revealing the personalities of the sitters in the arrangement of the background and in their outfits accurately painted like in a picture of Antonello da Messina. He undoubtedly cached the weird aspect of the sitters conveying it in some uneven features such as the eyes not perfectly in line, or the mouth slightly sloping, or in an ironic smile. The background reveals the sitter’s environment and story, a middle class milieu but full of unacknowledged tensions. We didn’t have time to complete the Cookham walk or visit Sandham Memorial Chapel in Burghclere, but I would like to see it sooner or later as I wish to know and understand more of Stanley Spencer’s absorbing work.

Last August the Lightbox in Woking hosted an interesting exhibition of contemporary young artists from the Ingram Collection. I was intrigued by the installation of Harrison Pearce called ‘Interview’ (2017), a kinetic sculpture and sound installation where two big inflated white balloons facing each other were poked by metal sticks. At the end, one of the balloons fell down. I discovered afterwards that the last part was unintentional, a mistake the staff needed to fix. Nevertheless, I had already drawn my conclusion on this art work; the tension of the interview tests the two characters, 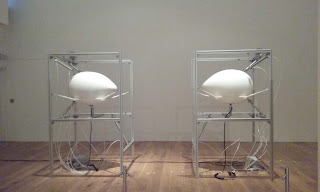 represented by the balloons, one survives and the other succumbs. But this was not the artist’s intention apparently, it just happened by chance.

Another interesting work on display was ‘The Reindeer Totem’ (2014) by Corey Whyte expressing the anxiety of Christmas time in the consumerist society pushing it into absurdity. I also admired the dynamic charcoal drawing by Dustin Jungel, ‘Trap’ (2010), depicting wild animals with swirling shapes as if in movement, seen from different viewpoints, expressing aggressiveness and vitality.

I was at the V&A again for a day out in London when I attended the Carol Ann Duffy and Friends event at the Southbank Centre. At the V&A I looked for the small temporary exhibitions which are usually displayed in one room only. In the Islamic Art section ‘Perched’, a flock of glass swallows by Feleksan Onar, was on display. It expressed the displaced condition of Syrian refugees in Turkey. The birds have trimmed wings and are therefore unable to fly away.  They look vulnerable, though whole in their elongated simple shapes. 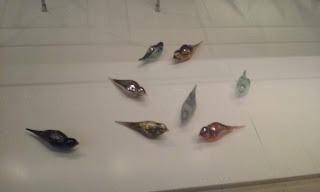 In the Gilbert Collection section among silver and gold objects, miniatures and mosaics, there were the contemporary astounding creations of Silvia Weidenback. Her brooches are inspired by the

snuffboxes of Frederick the Great (18th century). She created them using digital sculpting but also shaped metals in a traditional way by employing conventional tools and combining modern and long-established techniques. They look flamboyant and luxurious, astonishingly modern and yet a good match with the precious stone-encrusted boxes that belonged to the high aristocracy of the past.

Two rooms were dedicated to art works created on computers. The digital images looked neat, maybe too neat, and interesting. They are mostly abstract and have an essential quality with shapes evolving or diminishing, involving the viewer in a different dimension, almost ludic in its mathematical connections.

Last but not least, I visited the Jameel Prize exhibition which displayed the winners of the Jameel prize award for contemporary artworks inspired by Islamic tradition. I liked Hala Kaiksaw’s outfits of sustainable women wear revealing identity and stylishness. I was also intrigued by Younes Rahmoun’s ‘Hat-light’ where seventy-seven knitted hats are connected by electric wires and linked to one another symbolizing the faith shared by the Islamic community. The work of Kamrooz Aran was interesting as well. He challenges the stereotypical western idea of Islamic art as purely decorative encouraging to recuperate the meaning of the object focusing on its shape.

Before attending the Carol Ann Duffy event I visited ‘The Colour of Water’ at the Bankside Gallery. I had a wonderful walk along the banks of the Thames in a gorgeous sunny late afternoon pushing my way through the crowd of people who had my same idea. I even queued at times in the congested pavement. The exhibition displayed great works of artists who are part of the Royal Watercolour Society. I especially admired the work of my friend Geoffrey Pimlott, who enjoys painting abstract works. I also liked some figurative pictures like ‘Robin’ by Jill Leman, ‘Garden Room Sunflowers’ by Olwen Jones, Annie William’s ‘Colour Collage’, Wendy Jacob’s ‘Still life in a red room’, ‘Meow’ by Sue Howells and ‘Blue Jag’ by Martin Leman. They were so beautiful and well crafted and the whole experience was so involving that it made me wish to start painting again, 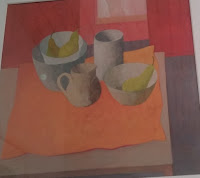 maybe attending the courses they organize or other painting classes as I used to do in the past when I lived in Lancaster. I haven’t much time at the moment to dedicate to painting, but it is something I have in my bucket list. There are so many talented people around I sometimes wonder if we have time to appreciate all of them in the right way. 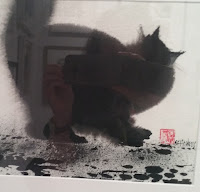 Finally, it was time to attend Carol Ann Duffy and Friends’ event at Queen Elizabeth Hall, Southbank Centre. She read from her last collection, Sincerity; it was an engrossing reading, sharp, precise and outspoken: ‘I am all sincerity’. Her words appeared on a screen at the back, slightly behind, sometimes ‘mistaking’ what she was saying, like ‘last bomb’ instead of ‘last poem’, but maybe it was intentional. I enjoyed her friends’ readings as well –  Imtiaz Dharker, Mark Pajak and Keith Hutson – especially Imtiaz Dharker’s poetry, so intimate, gently ironic, dealing with relationships and living ‘between the crack that grows between borders’. It was a worthy ending of a vibrant day.