PhD, Poetry and Reviews: The Edible Woman by Margaret Atwood

Throughout this year, I have enjoyed tremendously my academic research, as well as cooking and baking, and my writing. I also managed to give a bit of space to my artistic side producing cards and embroidered stuff. 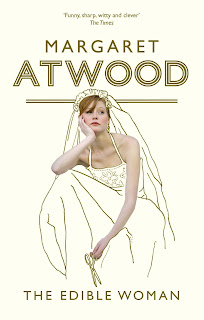 You can have a glimpse of my PhD research on Margaret Atwood’s work reading here below my review on The Edible Woman, her first novel published in 1969. I sent the review to several magazines but none of them accepted it as it is not a recent book. However, I think its message is still valuable today.

I also published some more reviews:

How The Light Gets In by Patrick Osada
https://londongrip.co.uk/2018/10/london-grip-poetry-review-patrick-osada/
Motherhood by Sheila Heti
https://thebluenib.com/2018/10/29/shades-of-motherhood-sheila-heti-reflects-on-childbearing/
Yayoi Kusama: The moving moment when I went to the universe
https://londongrip.co.uk/2018/11/yayoi-kusama-the-moving-moment-when-i-went-to-the-universe-review-by-carla-scarano/?wppa-occur=1&wppa-cover=0&wppa-album=133&wppa-photo=1803
Impressionism: The Art of Life
https://wokingwriters.wordpress.com/2018/11/03/impressionism-the-art-of-life-at-the-lightbox-in-woking/
Rome Modern City: between tradition and renewal
https://thebluenib.com/2018/10/21/rome-modern-city-from-nathan-to-1968/
Duilio Cambellotti, Myth, Dream and reality
https://londongrip.co.uk/2018/10/duilio-cambellotti-myth-dream-and-reality-review-by-carla-scarano/?wppa-occur=1&wppa-cover=0&wppa-album=128&wppa-photo=1657 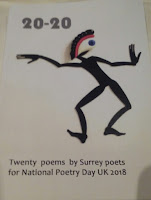 Three of my poems will be published on the Blue Nib, and one on London Grip; another one was published in an anthology of Surrey poets (Dempsey & Windle) in occasion of the National Poetry Day 2018.

You can also read one of my flash fiction pieces here: https://thebluenib.com/2018/11/01/lemons-carla-scarano-dantonio/

I hope you will enjoy it all.

Negotiating with the body: The Edible Woman by Margaret Atwood

‘Mankind cannot bear too much unreality’
The Edible Woman

Marian MacAlpin, the young protagonist of Margaret Atwood’s novel The Edible Woman, could well have been another victim of the deceitful world of consumerism in which she – and we – evolve. Yet her awakening to this joyful masquerade of advertisements is what makes the novel a bitter and timeless social critique. Although written in the spring and summer 1965, to be finally published in 1969, the novel still speaks meaningfully to our consumerist society with its mesmerizing commercials and artificial cheap hedonism.

These glossy sticky layers cover a grubby society whose relationships are revealed to be based on artificial enforced rules, provoking confrontational and threatening behaviours. In this hidden reality, men are predators disguised as rescuers, and women objectified entities at their disposal, potential victims trying to find their voices.

The obsessively present ads and their promises are not only artificial but also delusional. They expose the striking contradictions between the world of commercials and ordinary life. And this poses a threat, to the characters as well as to us everyday life consumers.

The Moose Beer commercial, which Marian needs to pre-test for the survey agency she works for, is a most striking example. Its stereotyped representation of the tough ‘real man’ who spends his free time hunting and fishing in the wilderness is obviously comical. And yet, when confronted with the men’s figures of the story, we can sense the danger. For Marian’s fiancé Peter, a hunter and amateur photographer, shooting an animal and ‘shooting’ a photo become synonyms; his display of guns, rifles and knives gets mixed with his cameras. And if the well-groomed, soap-smelling man lacks the real ‘tang of wilderness’ necessary for a stout-hearted fellow, he also enjoys the brutal description of the killing and gutting of a female rabbit he performed with one of his friends after a hunt.

The threat here is to become the ad in spite of oneself. A quest for identity seems doomed in this world where human beings are commodities, dispensable items like all other products. This realization, the idea that being a consumer also implies being metaphorically and literally consumed, triggers Marian’s awareness. And for a woman, the effects can be devastating.

Similarly to today’s commercials, ads mainly aim at selling products using women’s bodies and their sex appeal. Through this they indirectly dictate a behaviour, a role that women are supposed to comply with. The ads thus become a potent tool to enforce and confirm the rules of patriarchal society and force women into pre-fabricated roles.

As ads pervade life, Marian’s body is used and objectified, forced to perform servant roles like pouring drinks and serving food, or even acting in sex performances choreographed by Peter, inspired by male magazines and commercials. This last fact is more than relevant today, as we are not unfamiliar with its persisting existence.

Stuck in this fabricated, limited world, Marian keeps looking for a more authentic self. When she goes shopping, she consciously defends herself from this mentality, ‘willing herself to buy nothing’ except what is written on her list. But at the same time, she feels tempted by advertisements and the apparently self-assuring role they promise.

Unable to voice her worries, her body speaks for her, revealing her anxieties. In spite of her easily-influenced mind, her body expresses a non-verbal language that warns her of the traps of consumerism. Eating disorder becomes her rebellion as anorexia takes hold of her body. The latter starts to refuse food as she feels it alive, till cutting itself off. Food and social pressure are equally repelled: her body rebels to the roles and rules imposed by society as it refuses to consume, to absorb food, to ‘adjust’ to it.

The refusal of food brings Marian to the brink of starvation and forces her to become aware, to change her mind and repudiate the masquerade of the glossy party doll. The final baking of a woman-shaped cake becomes an edible substitute that should satiate Peter’s hunger and grant her freedom and survival from the oppressive rules of consumerism and patriarchal society.

In a final act of cannibalism, which negates as much as it reaffirms the roles of consumer and consumed in a postmodern perspective, Marian eats the woman-shaped cake. An act of re-appropriation and consumption to make sure the enemy is definitely destroyed and, at the same time, absorbed.

In Marian’s negotiation with the body – her body marked by starvation, manipulation and objectification – she finally compromises with it, in a search for wholeness that entails domesticity and acceptance of the basic rule of survival: eating. Still a consumer, she becomes a more conscious one, not so easily deceived by ads. A lesson still valuable today. 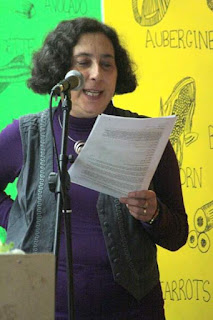