My half term week and other bits and pieces

I had a good half term week with my husband and my son Francesco who were at home for the holiday. I meant to live it in full, absorbing everything. During the weekend we visited my son

Lorenzo and my daughter in law Layla who live in Leeds, such a lively town ideal for shopping and sightseeing. We had a tour of charity shops where I found pin brooches for my mum and Halloween things for my daughter Valentina. We visited Leeds Art Gallery, which is not a big museum but has interesting pieces as well as a well-supplied shop with original ceramics and beautiful jewellery. The nineteenth century room featured a ravishing Alpine landscape by Gustave Doré, ‘The Shadow of Death’ by William Holman Hunt and some good pictures of John Atkinson Grimshaw. There were also two impressive sculptures by Barbara Hepworth and two by Antony Gormley. At the upper floor there was an enthralling exhibition of contemporary art, ‘Bloomberg New Contemporaries 2019’. It displayed works from UK art schools. I was attracted and intrigued by various pieces such as Lian Ashley Clark’s ‘A house with Boobs For Roof Tiles’, Alexei Alexander Izmaylov’s ‘Lape sul Naso’ (Bee on

the nose), with an intentional misspelling (‘Lape’ should be ‘L’ape’ in Italian but it probably alludes to other meanings), Becca May Collins’s ‘Tops, Tall’ and the satiric piece by Eliot Lord, ‘Boris Can’t Get Clean’. The collection also includes artists as important as Francis Bacon, Edgar Degas and Stanley Spencer. At the ground floor there was a display of wooden sculptures, ‘Woodwork: a family tree of sculptures’. It displayed objects from Africa, China,

India and Britain from nineteenth and twentieth centuries. Seeing some African striking wooden pieces side by side to contemporary sculptures was thought-provoking. They shared a unique interpretation of the human body in different forms, different ways of expressing reality that emphasise extreme originality and reveal diverse points of view.

At the shop I found postcards of works by famous Japanese artists such as Hiroshige and Hokusai. They were not on display but are part of Leeds Museums and Galleries collection. Afterwards we had a delicious dinner at Bibis Italianissimo, the best Italian restaurant in Leeds, and the following day we went to see my autistic daughter Valentina, who lives in a residential school near Doncaster. We brought her a lot of Halloween stuff. She enjoyed everything, stuck the stickers to the windows, ate the sweets and dressed up in the Halloween outfit, black fake

leather trousers and top, glittering pumpkin mask and a sparkling cape. On the way to the restaurant she spotted a gorgeous evening gown which looked like a Jack-o-lantern. Luckily the shop was closed as she really wanted to buy it, but we can print the picture for her. At the restaurant she had a big dinner: prawn cocktail, polpetti spaghetti, ice cream and chocolate fudge.

My husband and I had a wonderful day out in London too. Well, the weather was not exactly wonderful, it was rainy and windy, but we spent most of our time inside at the British Museum visiting the exhibition Inspired by the east: how the Islamic world influenced western art, which is on until 26 January 2020.  The exhibition mainly explores the concept of Orientalism highlighted in Edward Said’s seminal oeuvre. Said pointed out how the west manipulated the concept of eastern culture to demonstrate that the white coloniser is more civilized and therefore culturally superior, while at the same time they exploited their resources. But Orientalism is not only that, as the exhibition well explains. The relationship between Europe and the east dates to the Roman empire

and earlier, and became increasingly aggressive and difficult during the Middle Ages. The crusades meant to free the Holy Land, which was holy for the Muslims too, as well as part of Europe occupied by the Arabs, such as Spain and, later, Greece during the Ottoman empire. What happened was a mutual cultural influence in art and in literature (for example, the influence of One Thousand and One Nights by the legendary Persian queen Scheherazade on western storytelling) as the exhibition shows. This interaction was based on commerce at first (just think of Venetian trades with the east) that consequently led to curiosity and interest in each other’s cultural aspects. It can be synthesised in a Venn diagram where the two cultures in part overlapped enriching each other.

The display is plentiful of precious objects such as plates, vases, tiles, jewels, interiors, etc., that reveal how materials and patterns were imported and used to produce sophisticated objects for European markets. A good presentation of pictures by minor and famous artists testify the influence of eastern settings, customs and art on the west. The works by Jean-Léon Gérôme (‘Costumes’) and Cesare dell’Acqua (‘Oriental Woman’), for example, are a sort of photographic reportage of eastern customs seen from European view. The pictures by famous painter, such as Picasso, Ingres and

Delacroix, interpret the east in a more dynamic and challenging way. However, they are inevitably linked to voyeurism and eroticism, according to the western cliché about the east, especially about eastern women. At the end of the exhibition, interesting works by women artists show how western vision missed, and is still missing, the role of women in eastern culture. In the past her role was exclusively connected to the odalisques in the harem often depicted naked, a cliché that stuck. A 3 minutes’ video, ‘Harem 2009’, by the Turkish artist Inci Eviner, ironizes on the stereotype of the objectified and sexualised eastern woman. The video starts in an early 19th century setting based on engravings by Antoine Ignace Melling. It is a street with edifices on both sides looking like a brothel or prison cells. Then women figures appear performing repetitive actions that mock, imitate and challenge the western clichés of oriental woman. They dress and undress, dance, read, practice musical theory, exercise, cook, wield a weapon. They are creative and active, aware of their potentials and power. The

environment is open though circumscribed, but not secluded. This is an interesting thought-provoking exhibition that leaves the viewer with unanswered questions, such as to what extend is it possible a real understanding or integration between eastern and western culture? But maybe this is not necessary. I prefer to think about reciprocal respect in a vision of difference and mutual cultural enrichment that does not necessarily imply merging.

The free exhibitions in rooms 90 and 91 are stimulating as well. The first section is dedicated to portraits and woodblock prints by Käthe Kollwitz, then there is a part about contemporary drawings from 1970 until now, and finally Sir Stamford Raffles’s collection of Southeast Asian objects. I found Kollwitz’s work very skilful and striking in its darkness. The woodblock printings have stylised

images that depict in an essential way the hardships and tragedies of the first world war. Desperation and death are evoked with dramatic traits that leave no space to hope or forgiveness.

The contemporary drawings on display offer a wide range of provocative, highly creative and diversified examples of today’s art. From Grayson Perry to David Hockney, Gwen Hardie, Jan Vanriet, Ellen Gallagher and others. They show different techniques and an unrelenting exploration of differing media together with a constant questioning of forms and concepts that inevitably lead to political and social protest. 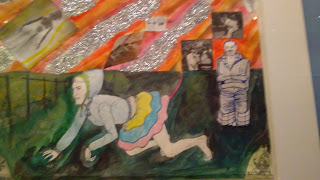 Sir Stamford Raffles was part of the Imperialist establishment that worked for the British Empire in Java and Sumatra. He collected a great deal of materials from manuscripts to masks, puppets, musical instruments and religious sculptures as well as drawings of religious buildings. They are objects that not only testify the richness of those cultures but also the collective practices and curiosity of the colonisers who were inevitably influenced by those ideas. Beautiful Wayang Topeng masks and Golek Klitik and Kulit puppets on display were used for traditional performances in dances and puppet theatre. 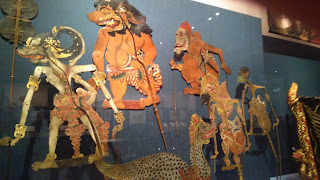 We also visited the new exhibition of the Royal Watercolour society at Bankside Gallery, on until 9th November. The leading theme is The Art of Travel, but it is loosely interpreted by the various artists. Beside the striking abstract work by my friend Geoffrey Pimlott, I admired the works of Jill Leman, Angie Lewin and John Grossley. All the pictures are unique and perfectly executed, though very different one from the other. The watercolours by Leman and Lewin are figurative and delicate, while Grossley depicts with strong bold colours. It is a remarkable display, inspirational for artists and non-artists in the subjects chosen and in the mastery of the use of different media. 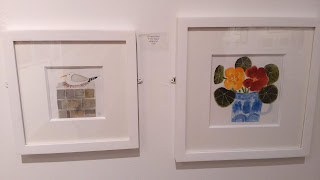 In the evening we went to celebrate our 27th wedding anniversary in a top-notch Italian restaurant: Osso Buco at Weybridge (https://www.ossobuco.co.uk/). We had their specialities, stuffed polpo (octopus), tonnarelli with ricotta (sort of ‘plump’ ravioli), salami with tartufo (truffle) and risotto pescatora (with seafood). They were superb, real specialities. The atmosphere was demure but very Italian.

On Sunday there was a moving celebration at Brookwood Military Cemetery to commemorate the fallen. I never miss it. The Italian flag, the music, songs of the First World War and the Mass, help me not to forget the dead soldiers and their sacrifice, reminiscent of a less happy and plentiful time that may come back. 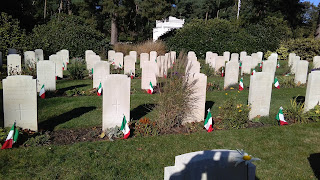