In Birmingham to see Margaret Atwood 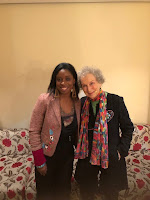 At the end of October, I was in Birmingham to see Margaret Atwood at the Royal Symphony Hall. There were a lot of road works, which prohibited access not only to vehicles but also to pedestrian, around the centre and I struggled a bit at first to find my way but eventually I managed.  Everything I needed was within 15 or less minutes walk: the central station, the cathedral, museums, the Symphony Hall and the Travelodge where I spent a night. In the centre, I found Tim Hortons, the Canadian McDonald’s, near the station. I couldn’t help buying some delicious donuts.

I had time to visit Birmingham Museum and Art Gallery which has some unique pieces by Canaletto, Joshua Reynolds, some Impressionists, such as Pissarro, Sisley, Utrillo, De Vlaminck as well as works by Rubens, Guercino, Crespi and Orazio Gentileschi. Remarkable contemporary artworks by Barbara Hepworth and Henry Moore for sculpture, and Peploe, Lowry, Morandi, Hodgkin and Winifred Nicholson for painting testify the significance of the collection. It is not a large display but there is one or two exceptional pieces for each artist that give a clear idea of the artistic movements.

The most interesting part for me was the Pre-Raphaelite rooms with works by Burne-Jones, William Morris, Ford Madox Brown, J.E. Millais and Dante Gabriele Rossetti. Unfortunately, ‘Proserpina’ by Rossetti was not on display (probably on loan to another museum, they told me) but there was an astonishing portrait of Fanny Comforth in red chalk. I could see ‘The Last of England’ by Ford Madox Brown that I had only admired on book reproductions till then, as well as fabulous designs for wallpapers by Morris; they are so inspiring with their intricate elegant patterns. He thought that ‘beauty is a marketable quality’, so, his art merged his wish to produce artistically beautiful things that are also useful.  Morris was not only an artist but also a poet, a collector, an entrepreneur and a designer. I find his idea of applying art to everyday life extremely interesting. His aim was to produce something that was useful and appealing in the sense of artistic and aesthetically pleasant in the context of art tradition. For this reason, besides wallpaper patterns, he even designed artificial floor covering, linoleum. In his ideal concept of art and design, he was against mass production as he thought it was a perversion and led to alienation. Eventually he was successful, and his firm had prestigious commissions.

Morris had a lifelong friendship and collaboration with Burne-Jones with whom he worked at the Holy grail tapestries inspired by Thomas Malory’s Morte d’Arthur. The tapestries were commissioned by William Knox D’Arcy to decorate his home, Stanmore Hall in Middlesex. Most of the tapestries, based on the original, belong to Birmingham Museum Trust but are rarely on display due to their delicate quality. They illustrate the quest for the Holy Grail by the knights of the Round Table, their failure, due to past sins, and visions.  It is a symbolic story that seems far from today’s mentality but still maintains its importance in the perpetual quest for an ideal that might not be transcendent but is still present in most people’s views. 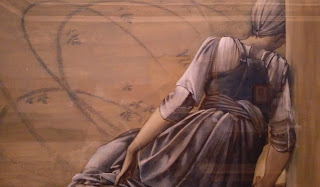 The museum has also an interesting section on Birmingham history and a remarkable display of the Staffordshire Hoard, the largest hoard of Anglo-Saxon gold, silver and garnet (over five kilos of gold) mostly in fragments. It Testifies the skilful metal work typical of German culture. The fragments show the mastery of cloisonné garnet metal work, gold filigree and stamped silver foil. An astonishing gold helmet is reconstructed and on display, it was part of military equipment belonging to elite warriors and noblemen. There are also some religious objects as the hoard was probably buried when the Anglo-Saxons were converting to Christianity.

The most interesting among the non-permanent exhibitions was Within-Without: image and the self, exploring how people construct their body image challenging stereotypes and public representations. Positions of power and ‘the male gaze’ are represented by provoking artworks that point to fluidity rather than giving conclusive solutions. 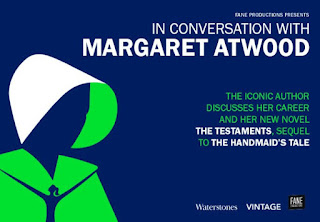 Seeing Margaret Atwood interviewed by Irenosen Okojie was riveting and important for my research. She spoke about Cat’s Eye and Alias Grace, but above all the event was centred on The Handmaid’s Tale and The Testaments. She spoke about her female characters and the risk of backlashes against feminist achievements by conservative movements. Though her vision might seem bleak sometimes, she is hopeful that things can be changed. She said that it is possible to reverse climate change issues as well as totalitarian regimes, which always fail at a certain point. She is hopeful, though she doesn’t believe in legacy and expectations or in perfection. She said that she is suspicious of perfection and expectations are disappointing. She also spoke about the film adaptations of Alias Grace and The Handmaid’s Tale, about her readings and the author who has influenced her the most, surprisingly Beatrix Potter. I found her final remarks about literature inspiring. She said that a piece of literature is not a message but ‘an experience you have to go through’, like Dante in Inferno. 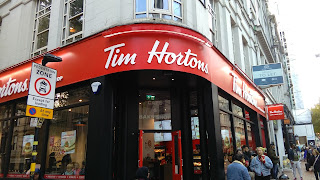 Before leaving Birmingham, I had my shopping tour, of course: charity shops and Primark. I found a black mini-skirt with daisies embroidered for my daughter Valentina (size 8, she is so tiny) and some Christmas stuff. Primark was huge (the world’s biggest one, they say), a megastore. It is on five floors with a Disney area and a Disney café. In the mezzanine there is a restaurant and a café with comfortable sitting areas. It was packed with people of all ages dragging trolleys and carrying bags full of Primark things. They were strolling around as if in a high street or in a theme park of sorts. It is a place where you can spend a day. I loved it. I found something to buy, of course as Christmas is near and I am already preparing the presents to bring to Italy. 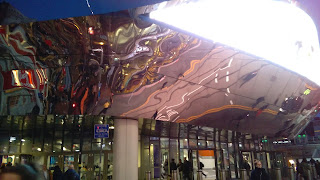 In the last months I was prolific as usual in producing reviews and articles. Here are some links:

The Royal Institute of Painters in Watercolour: https://wokingwriters.wordpress.com/2019/09/02/the-royal-institute-of-painters-in-water-colours/

In the Time of rabbits: https://londongrip.co.uk/2019/08/london-grip-poetry-review-valerie-lynch/?fbclid=IwAR0vm2En1NdJberfPoWrT9cqNztoJho2Qn0PtBJJA2bxP7kjfPP_sIVc1IQ

Some of my poems have been published or are going to be published soon:

‘Cooking Betrayal’ in South 60
‘What I was leaving’ in The Blue Nib 40
‘Cyclamens for my Mother’ in Alternative Truths (Dempsey&Windle)
‘Stars and Flags’ in Ink, Sweat and Tears
‘Dispersing your ashes’ in The High Window

My PhD carries on with some small crisis as I am finalizing my thesis and it seems very hard to make it work near perfection. In the meantime, I returned to academic mentoring, this time at UCA in Farnham. It is a pleasant place to work, full of artists, full of colours. I am also carrying on with volunteering shifts at The Lightbox, though I have less time as I am working.  At the Lightbox I met members of Woking Art Society and I decided to join it together with my son Francesco, who loves painting and art. We are attending their meeting once a month at the Vyne in Knaphill and visit their exhibitions. We attended an inspiring workshop too, with Liz Seward at Brookwood and I am planning to go back to drawing and painting though slowly as my priority is my PhD thesis now.