Christmas in Rome with my mum and her friends 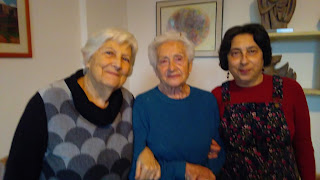 Before Christmas Day, my mum and I were very busy visiting her friends and neighbours. They are elderly people like my mum in good health overall and very lively. We made Canadian biscuits for them, peanut butter biscuits with chocolate chips, shortbread and gingerbread, which were very much appreciated. We spent hours chatting with them about their families and hobbies, their memories and various aches and pains. I admired their incredible joie de vivre. During winter time, they usually meet at the barretto (little bar), Caffé Cielo, where they have a hot drink and chat for hours. They also gather once a week at the parish church, San Fedele, with Gruppo Argento (silver group) and at Mass on Sunday. We had dinner with them on a Sunday, a long table with more than thirty people. food was delicious as each one brought their special dish: lasagne, polenta, quiche, different kinds of meat and side dishes.

One of my mum’s friends, Gigliola Ferroni, is a sculptor. She makes ceramic and clay sculptures and lately drawings using crayons, coloured pencils and ink. I have some of her works at home which I bought years ago at some of her exhibitions. I have a sculpture, ‘Incontro felice’ (happy encounter),

and a drawing of the Pisces zodiac sign. When we met, she gave me one of her last drawings as well, green abstract shapes she called ‘Armonia’ (harmony). I love her work, especially her drawings, so simple and effective. You can find out more on her work is here:

I met another artist while I was shopping with my mum, Bruna Coppi (http://www.brunacoppi.com/) who has a little shop in via Ignazio Giorgi packed with her artwork, mainly intriguing collages made with recycled materials, boxes decorated with decoupage, pieces of furniture she renovated, and original jewellery made with fabrics and paper. I was flabbergasted by her creativity and sense of humour. 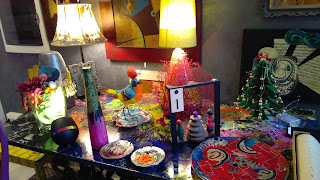 I saw my sister as well. We spent two days together helping my mum with bills, her post office account, supermarket shopping and other bits and pieces she must deal with. Christmas Day and Boxing Day were dedicated to family. My mother in law made her special ravioli and lasagne, abbacchio (lamb) and Coniglio alla cacciatora (hunter’s rabbit). One of my boys was with us and my eldest son joined us just after Christmas. We skyped with my daughter who lives in Tokyo exchanging hugs and kisses from the screen. Unfortunately, my husband’s grandmother, nonna Paola, is rapidly declining. She is ninety-seven now and struggles to recognise people except from her own children. I also attended a funeral on 31st December at San Giuseppe’s church in via Nomentana. It was the funeral of the professor Maria Grazia Mara who guided me in the final thesis of my second degree in Italian language and literature together with father Giancarlo Pani. She was a professor at the University La Sapienza in Rome and joined Istituzione Teresiana after her retirement. Pope Francis was present. It is sad to see people declining and dying but the cycle of life cannot be stopped though we are lucky that today, thanks to cures and medicines, we can enjoy life almost until the end. 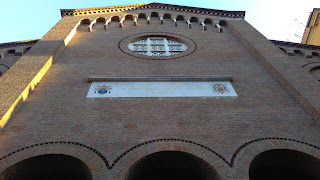 In the evening my mum and I enjoyed relaxing in front of the TV or listening to music, knitting and reading. I completed a bag and a jumper I had started at home in the UK with the help of my mum who gave me good tips on how to knit the sleeves and the neckline. Old films were our favourite programs. We watched The Patriot, Casablanca and The Undefeated, a film with John Wayne on the aftermath of the American Civil War. They were great stories with clear messages and outstanding actors showing the American way of seeing things, which sometimes seems too easy and straight. 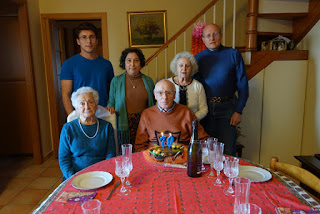 Watching Italian TV, we could not avoid politics. Apart from disagreements inside the coalition 5 Stars and PD (now split in two parties, PD and Renzi’s Italia Viva) on concessioni autostradali (motorway’s franchise) and legge sulla prescrizione, that is, a law that establishes a deadline after which a person who committed a crime cannot be persecuted, there was a lot of talking about the Sardine movement. They are people who gather in squares stretti stretti (close together) like sardines to manifest and defend themselves against the sharks of politics. They are very well behaved, tidy up the public spaces after their gatherings and are non-violent. They consider themselves anti-fascist and sing both the Italian National Anthem and ‘Bella Ciao’, a Partisan song of the Second World War.

The movement started last November in Bologna in the name of solidarity, respect of human rights, non-violence and inclusion. They are willing to help the immigrants and refugees, of course, against the restricted views of the parties of the right, such as Salvini’s Lega. The Sardine are not organised in a party and do not seem interested in political power at this point in time. Nevertheless, they express a malaise, especially in young people, who do not seem to find believable values and stability in the present Italian political situation. People need something to believe in that makes sense to them or offers a more ethical and stable future to the country. There seems to be an emptiness that needs to be filled with a program that is not only about economy but that also invests in people and in their dreams or beliefs. The movement of Sardine is similar to what Greta Thunberg is doing but without a leader and it is more fragmented. They gathered in more than a hundred squares from northern to southern Italy expressing their silent anger in a dialogue that asks for specific answers. The main concerns in the Italian agenda are jobs and economic growth, though social justice and immigration follow. Some journalists commented that the Sardine movement should be better organised in order to influence political decisions. Others believe that, though interesting, their influence is minimal, they only represent a small number of people compared to the great majority of the Italian voters who are indifferent to the Sardine’s commitment and beliefs.

Another interesting program was Atlantide hosted by Andrea Purgatori who retraced John Lennon’s life from his Childhood in Liverpool to his death in New York on 9th December 1980. He was an incredibly talented musician, like all the Beatles. His songs are masterpieces and his fame was well deserved. His commitment to the peace movement during the Vietnam and Korea wars is admirable. In his work he was poetical as well as disruptive and innovative, both in his music and lyrics and in his protest. His connections with the Black Panthers’ movement and his support of activism and revolution, brought to deportation from the US once his visa expired in 1972. However, the expulsion was revoked several times and after four years he obtained the Green Card that granted permanent residence. Two years later he was shot by Mark David Chapman. A sad ending for a modern hero who died fighting like all heroes. His message is still alive, his wife Yoko Ono commented at the end. Certainly, his songs are very popular all over the world forty years after his death. During Christmas time, ‘Happy Christmas (War is Over)’ is still one of the most popular carols.

Another story intrigued me, this time in the heart of Camorra, the criminal organization that rules in Naples. Non è l’Arena, hosted by Massimo Giletti, explained how social media and RAI (Italian national broadcasting company) gave too much space to the wedding of Tina Rispoli (widow of the Camorra boss Gaetano Marino) and Tony Colombo, two people linked to Camorra.  Their ceremony was widely broadcasted by the Italian TV. They arrived at the Maschio Angioino (Naples’ medieval castle), where the wedding took place, in a white carriage trained by six white horses with jugglers and cheerleaders following and trumpets playing Mendelssohn’s Wedding March. It was a showing off of power in a stereotypical tacky folkloristic way (called ‘nozze trash’, trash wedding, by journalists) but it also revealed an attention seeking syndrome typical of today’s celebrity mentality. Tina is a fashion blogger and Tony is a singer with a melodic voice. They both make their money with advertisement and social media like celebrities do rather than dealing cocaine. They are well connected with Camorra (who can deny it) but their presence on social media is linked to today’s social networks’ mentality and not to criminality. However, as the intellectuals and journalists present at Non è l’Arena commented, RAI should not have given so much space to them despite their popularity which brought in an audience. In this way they set them as examples and became complicit with whom they are and with whom they are connected with, that is, with Camorra. Are we surprised? Can we stop this mediatic process? We all know how social networks work, there is some good but also a lot of trash around. We need to choose, pick up what we prefer and shape our personal opinions. I feel sorry for Tina and Tony, maybe they did not choose to be who they are.

At the cinema there were two interesting new films but I didn’t have time to see them, Pinocchio by Matteo Garrone with Roberto Benigni as Geppetto, and La Dea Fortuna by Ferzan Özpetek. Taking my time, not rushing and spending time with people were my objectives this Christmas. I enjoyed my time in Rome and eventually had also time to write some reviews, visit an exhibition and go to Naples with my husband to see Museo Archeologico Nazionale, the National Archaeological Museum. All in my next blog post.