Before Christmas, time was tight and hectic. The student I support at UCA in Farnham had some work to hand in and I had my own deadlines for my PhD. Besides, I also completed an article for the magazine Exchanges, University of Warwick, on The Edible Woman by Margaret Atwood, which will be published in January 2020. I feel it is a big achievement, and I hope the results of my research will spread more and more as I think Atwood’s work and message are outstanding and innovative. The more I read of her and on her, the more I become passionate of my research and of Canadian culture in general. My Canadian experience last summer was riveting. I am planning to go back next summer to visit Toronto and British Columbia and see my Canadian friends as well. 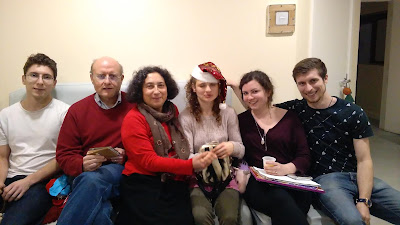 Christmas shopping was great fun. I started in middle November picking up things here and there and ordering some things online. I bought loads of biscuit boxes in elegant packages from Museum collection and the V&A as well as last minute mince pies from Sainsbury’s and Tesco for friends and family. I found some lucky picks at charity shops, mainly china stuff, Christmas decorations, hats, gloves and a black velvet skirt for me I matched with a golden turtleneck and a red jumper. My mum wanted turtleneck jumpers from Primark and I also found a teapot with strawberry patterns I thought she would love. For my mother in law I bought some nutcracker Christmas decorations and for my husband and the boys Christmas socks and t-shirts with a phrase by Arthur Conan Doyle: ‘Once you eliminate the 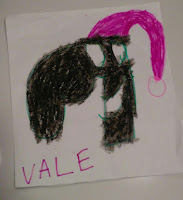 impossible, whatever remains, no matter how improbable, must be the truth’, which I thought would agree with their point of view. For my daughter and daughter in law I matched bags plus gloves and for Valentina, my autistic daughter, we prepared special treats. We spent a day with her before leaving for Italy and brought her chocolate, sweets, decorations to paint and hang, teddy bear and party clothes. She loved everything, painted the new decorations, drew one of her favourite cartoon characters, sergeant Roderick, with Father Christmas hat and when we went to the restaurant she dressed up in her black and gold party outfit. She ate all her food at the restaurant and enjoyed pulling the crackers and collecting all the little presents from everybody.

Before leaving for Italy, we had a day in London to see the Christmas lights in the centre and visit the exhibition Troy: Myth and Reality at the British Museum, which is on until 8th March. The first part of the exhibition retraces the war of Troy as it is told in Iliad and Odyssey by Homer.  I remember most of the episodes as in Italy we study the war of Troy since elementary school. The captions were engaging and the artefacts on display astoundingly beautiful.

As the exhibition well explains, the war of Troy is the archetype of all wars in which heroism alternates with ruthless violence. This is well expressed at the beginning in the contemporary artworks ‘Vengeance of Achilles’ (1962) by Cy Twombly, a triangle smeared in red at the top, and in the installation ‘Trojan War’ (1993-4) by Antony Caro, which was inspired by Bosnia conflict. Though a city corresponding to Troy was eventually found by Heinrich Schliemann at the end of 19th century in today’s Anatolia at the entrance of the Black Sea, the Trojan war’s stories come from a series of myths. They were very popular, told and retold by storytellers, painted on walls in houses and public edifices, similarly to the frescoes of the stories from the Bible in Christian churches, and even reshaped by Christianity until today. Trojan and Greek heroes were supposed to be the ancestors of Roman emperors and of the Royal Houses of Europe. Certainly, Troy was a powerful and rich city, a city of traders which was destroyed and rebuilt nine times in 3,600 years. The mythical heroes such as Achilles and Hector in Iliad, Odysseus in Odyssey and Aeneas in Aeneid by Virgil, have been taken as examples throughout centuries. Their deeds and legacy still resound in today’s storytelling. Achilles’ rage and vengeance, Hector’s heroic death and faithfulness to his destiny as well as Odysseus ambiguous cleverness, symbolise human life in its diverse experiences. Aeneas shows a different aspect linked to the Roman concept of legacy to ancestors and family.

On the other hand, the figures of women are controversial and disruptive. Helen is described as ‘destroyer of ships, destroyer of men, destroyer of cities’ by Aeschylus. She is the cause of the war as Aphrodite, the goddess of love, promised her to Paris to win the golden apple in the contest for the most beautiful goddess against Hera and Athena. This is a constructed intriguing story as, according to archaeological discoveries, Troy was destroyed because of its competitive trades that threatened Greek power in the Mediterranean and not because of the abduction of a Greek queen. Sticking to the myth, the female characters play either the part of the devote wife, such as Hector’s wife Andromache or Odysseus’ wife Penelope, the seer Cassandra, whose prophesies were not believed, or sheer seductresses such as Helen and Briseis, who caused conflicts. Nevertheless, they seem estranged from the events they are involved in, the object of seduction rather than the subject. As Christa Wolf remarks, ‘we have no chance against a time that needs heroes’ (Cassandra, 1983). But today we can give a chance to these women who underwent a literary lynch of sorts throughout centuries. They were wrongly considered the cause of violence, mistakes and sacrifices enacted by men.

This re-evaluation of women is present in some of the modern and contemporary artworks on display in the last section of the exhibition with works that range from Blake to Paolozzi, Burne-Jones, Poussin, Fuseli, Canova, Lucas Cranach the Elder and William Morris. Eleanor Antin, for example, in ‘Judgement of Paris’ (after Rubens), 2007, attempts a different interpretation of Helen of Troy, she says that ‘Helen is always vilified as a seductress and both admired for her beauty and feared for her power—yet however she’s interpreted, her place in our historical fantasy has always been legitimized, written, or painted by men. I wanted to humanize this woman, to find her beneath the covering of stories that obscures her to us.’ The picture is a photograph depicting the judgement of Paris with the three goddesses in the centre and Helen on the left side. She wears a Hawaiian outfit of sorts and is in a clearly marginalised position. She was used, manipulated both by the goddesses and by the ‘media’, that is the myths and storytelling. The final piece of the exhibition is the reconstruction of Achilles’ shield, in which earth, skies and a city (maybe Troy) are illustrated. They symbolise human life where both war and peace are present. The conclusion seems to confirm the impossibility of avoiding conflict that, however, might be solved in peaceful ways.

In December, I also attended two music events in London. Scheherazade: a retelling for our times by Rimsky-Korsakov at Queen Elizabeth Hall, Southbank Centre, and Othello by Giuseppe Verdi at the Royal Opera House. They were both enthralling experiences. The four sections of the concert were alternated by readings by Ruth Padel, Daljit Nagra, Hanan al-Shaykh and DBC Pierre. It was mesmerising, both the music, beautifully conducted by Geoffrey Paterson, and the readings. They highlighted the power of storytelling as well as the subtle violence underneath Scheherazade’s story at the edge of the abyss. It is like a journey that allows to discover things but also goes beyond them in a dizziness between life and death. Her stories spread news, fragments of life, examples from which we can learn who we are and how to cope with the world around us.

Othello was beautifully played and acted. I was amazed by the elegance of the Royal Opera House, the restaurants, the shop and the beautiful costumes on display. I know the libretto by heart, so I could follow every word and aria.  The opera follows almost literally Shakespeare’s play making it more condensed. The music contributes to the ambiguity of the themes of the story and of the characters. They shift from faithfulness and innocence to betrayal and ruthlessness, trapped in their roles that are reflected in Iago’s constructions and manipulations. Othello and Desdemona are doomed and precipitate towards their destiny similarly to Greek heroes but, this time, from a modern perspective. They are isolated and unrewarded. The final winner is Venice, its power that rules overall and takes advantage of human weaknesses. Othello is an outcast and a failed hero, Desdemona seems complicit of her state, Cassio is manipulated by everybody including his lover Bianca, and Iago, despite his cunning machinations, is eventually caught and punished. The music seems to soothe the tragic ending in an encompassing vision of our fallen human condition. At the end of the show I had to rush to catch the last train to Woking.
After all these stimulating happenings, I finally headed to Rome to see my mum, friends and family. 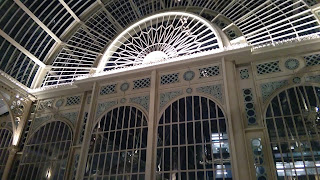