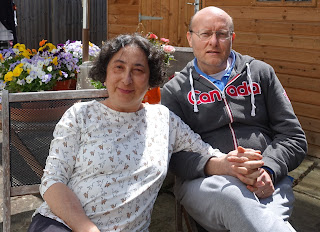 Just before the lockdown, my work at UCA Farnham stopped. My husband, I and my third son were all at home for four weeks they said, but I felt that it was an indefinite period that might go on through the summer. My husband was very busy teaching his lessons and meeting his colleagues online. My son, after a first period of cancellations of all activities, courses and meetings, had some online interviews. I concentrated on supermarket shopping at first. I did not have the intention of doing bulk storage or obsessing over panic-buying as I could find almost everything I needed, but I was bewildered when I saw the shelves almost empty at Sainsbury’s. No vegetables and fruit, no

toilet paper, no eggs and flour, no yeast, no passata and cans. I had some supplies at home for about a month but I felt uncomfortable all the same. Boz, the local greengrocer, had plenty of fruit, vegetables and eggs. I found flour and passata at the Italian Deli in Horsell and I luckily had yeast for our Sunday pizza and toilet paper for four weeks at least. I felt reassured. Food hopping food became my priority and only distraction as all the other shops were closed. I noticed that the clothes and home aisles at Sainsbury’s were deserted, everybody was shopping only for food. I visited the local Tesco as well from time to time for supplies of biscuits and sweets, and Morrison’s for plants as the plant nurseries were closed. I spent a lot of time cooking and baking both to have something to do and because being at home we ate more and more often. The most important moment of the day seemed to be the evening meal when the three of us met after our daily activities and partial isolation from each other.

I stuck to exercising, half an hour-forty-five minutes cycling per day and twenty minutes’ yoga at 6 pm watching the news. Despite my efforts, I gained two kilos though my target was to lose two, so I need to lose four kilos now. I think it was too much chocolate, biscuits and cakes. So, after a few weeks I made up my mind to reduce sweets to one piece of cake in the morning and only one biscuit or small piece of chocolate with my tea break in the afternoon. I also reduced my portions and am waiting for some results in the long term. During the day, I alternated my academic work on my PhD thesis to my writing (reviews, poems and articles) and to some paintings. I wished to develop the sketches I had made in Japan but my mind was obsessed with the pandemic so I gave up and painted coronavirus instead. 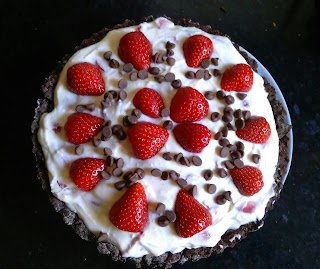 In the end, I realised I tended to follow some patterns: academic work in the morning some writing, a short tea break at 11 am, lunch, watching Bargain Hunt and the news at 12,30-1 pm, sometimes a phone call to friends and relatives. Then more work in the afternoon, if I still had some energy and concentration, then cycling, setting up the dinner and I finally watched the 6 pm news while doing my yoga practice. After dinner I was too tired to do any more work so I watched TV and did my crochet or sewing. My favourite programs on the BBC are detective stories like Agatha Christie’s Poirot, Midsomer Murders, Lewis, DCI Banks and Scott and Bailey. On the Italian TV we watched the news every day at 7 pm, some history programs and Italian-style comedy films. I also like Bella da morire (drop-dead beautiful), a mini-series with Cristiana Capotondi who plays the role of a tough police inspector determined to solve stories of violence against women. On the Italian Paramount channel, they broadcasted Sherlock’s season four and five and Inspector Morse.

I spent much more time than usual on Facebook and Twitter posting pictures, thoughts, quotes and updates. It was a way to keep in touch with my friends as well, commenting on their links and putting likes. I also put some stuff on sale on Facebook Market place and managed to sell two items before the lock down: two sets of kangaroo shoes and a table football.

After two weeks the supermarket shelves were restocked though flour and yeast were still missing. Luckily I found some flour at the Italian Deli and made yeast with ‘pasta madre’ (sourdough) from a recipe my mother in law sent me. It took about two weeks to make it as it is a long process. I started with flour and lukewarm water I mixed and kneaded it, then stored in a warm place covered with a wet tea towel. I ‘refreshed’ it with more water and flour every 24 hours for five days then every 12

hours throwing away the upper part which is usually sour and crusty. When it was ‘mature’, that is, when it doubled its size and didn’t smell sour, I stored it in the fridge and used half of it to make pizza, leaving the rest in the fridge after refreshing it again with more flour and water. It worked, and I can use pasta madre for months maybe years. This is the way women made bread in the past when yeast was not sold in shops or supermarkets.

Of course we couldn’t visit my autistic daughter Valentina at Fullerton school near Doncaster. We skyped with her once a week and I sent her some parcels with sweets, clothes and our picture. Sometimes she was unsettled but other times she was cheerful and happy to see us.  We sent each other kisses and hugs through the screen. I also sent a parcel to my son and daughter in law in Leeds with Easter eggs, floor, Italian pasta, rice and two crocheted pot holders I made. The postage cost more than the content.

While I was at home, I stopped wearing earrings at first but still combed my hair. I wore my pyjamas until 9.30-10.00 pm then put on a track suit bottom and loose t-shirt. Then I decided to have a bit of improvement. I went back to earrings, three per ear, matching them with some nice tops with flowery patterns. I still kept the comfortable track suit bottom though, wore warm socks at home and combed and straightened my hair. I took off my rings after a while as my fingers had swollen from all that washing hands and kneading dough. 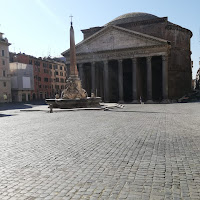 Going to the supermarket was the most exciting experience during the lockdown, so I put on a nice dress or jeans with a belt with a big buckle cowboy style and loose colourful shirts. I even wore make-up, bought new lipsticks and put them on at home. It was a way to cheer me up and survive in such a stillness. Some people in Italy called it a period of ‘emptiness and plenty’. The emptiness of streets and squares and the houses full of people forced to stay at home. The emblem of this emptiness in Rome is St. Peters’ square, deserted when the Pope speaks. But we need to face this emptiness looking at a better future that will be built on this vulnerability, constructing creatively, fiercely surviving despite the silent killer. It is excruciating to hear from the news how many people are still dying, especially doctors and nurses who give their lives to help others. I liked what the Pope and the Queen said during Easter time. They said what we all needed to hear in a direct essential way. I also like Tom Moore’s motto: tomorrow will be a good day. Hopefully.