I did my best not to get bored. A part from working on my PhD thesis and my writings. I met my fellow writers online. It was exciting to have a chat on our pieces, exchange feedbacks and have the opportunity to keep in touch despite isolation. We met every four weeks and updated the Woking Writers Circle’s website with pictures and comments. We kept in touch on Twitter and Facebook as well trying not to lose track of what we were doing, suggesting each other new ideas on our experience of Covid-19, transformations, football, how we were at 20 and how our gardens go. I joined webinar events with Canada-UK foundation, online art classes, meetings, performances and lectures. It was a bit hectic at times. The Tate and V&A sent emails with engrossing links to articles and videos. It was a good chance to keep going and find new prompts for my creative life. 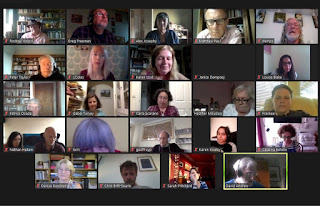 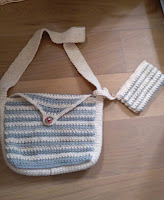 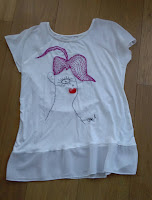 During the lockdown I also did a lot of crochet, knitting and sewing, starting new projects that made me feel creative and alive. I don’t know why but I mainly concentrated on purses and bags using both crochet patterns and some nice pieces of fabrics my daughter gave me some time ago. It was more the process than the final product that intrigued me, the opportunity to create something new, realise my product. I used buttons to close the bags as I ran out of zips at a certain point but then I placed an order for fifty zips on Amazon. Each time I finished a purse or a bag I sent the photo to my mum through Tania’s Facebook account (she is the carer’s who lives with my mum). Both Tania and my mum sent me back pictures of their work, crochet and knitting beautiful things, they did during the lockdown. I also made bags inspired by Japanese boro bags and a t-shirt for my autistic daughter Valentina with Leela, her favourite cartoon character, embroidered on the front. I put some things on Facebook marketplace (I am under Carla Scarano) and managed to sell some items, mainly Japanese things: haori, kimono and Japanese pottery. It was fun. 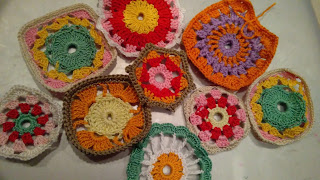 I am working on a poetry pamphlet, Negotiating Caponata. I was overwhelmed when I received the good news that it was accepted for publication by Dempsey and Windle 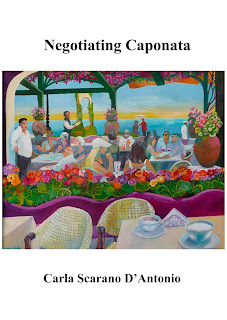 (https://www.dempseyandwindle.com/). The poems are about food and family relationships; some of them have been published in magazines such as South, The Blue Nib, London Grip and The High Window. My fellow writers of Woking Stanza and Woking Writers Circle gave me some good tips on titles and on how to improve some images. My daughter helped me too from Japan; she has a literary side she is not developing at the moment, as she is concentrating on fashion, but it is there. My poetry tutor Dawn Wood was very important in the process of redrafting. She has published her work with Templar Poetry and is a painter and a sculptor too (http://www.dawnwoodartist.co.uk/  https://www.scottishpoetrylibrary.org.uk/poet/dawn-wood/) I trust her advice and feel very comfortable with her. I am in the process of proofreading my pamphlet with the help of Janice Dempsey who said it will be ready in July 2020. I am so excited and happy about it and am looking forward to having a copy in my hands and sending it to my family and friends. There will be a link on my website for Dempsey and Windle’s website once it is published.

I took part in a football challenge with the help of my husband on Facebook started by Greg Freeman. Here are the results of my research and some good pics:

Francesco Totti (born 27 September 1976), mainly played for Roma and the Italy national team as an attacking midfielder or second striker. He scored 307 goals with Roma and is considered one of the best players of his neration and Roma’s best ever player. His play is versatile and creative, he is a great leader and has sense of humour. He published several books of jokes playing on his supposed naivety and inexperience, here are some examples:

https://talksport.com/football/227738/francesco-totti-jokes-selection-great-gags-about-retiring-roma-captain-170504237780/
He is married with Ilary Blasi and has three children. Here is a video of his achievements: https://www.youtube.com/watch?v=F6VDGQ4xKX0
Forza Roma, Forza Lupi! 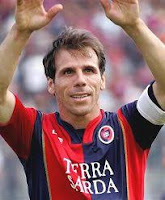 Gianfranco Zola (born 5 July 1966) is an Italian footballer who played as a forward. He played for Napoli and Parma, and then moved to Chelsea where he was assistant manager and then in 2008 manager of West Ham.  He was particularly good with his right foot. Zola was awarded The Most Excellent Order of the British Empire in 2004 for his merits and was appointed best football player in 1997. In 2003 he was voted Chelsea's greatest player ever. He was born at Oliena in the beautiful island of Sardinia in the middle of the Mediterranean Sea but said he felt at home in London. Zola loved Covent Garden area, London Bridge and London’s parks.
His top goals here: https://www.youtube.com/watch?v=zfk-TaKe5NM
Zola is also a good pianist: https://www.youtube.com/watch?v=opK2VIukC4w

Roberto Baggio (born 18 February 1967) mainly played as a second striker, or as an attacking midfielder. He was creative and gifted. He was named in the list of the world's greatest living players. He scored hundreds of goals in his career. He played for different Italian clubs: Vicenza, Fiorentina, Juventus, A.C. Milan, Bologna, Inter Milan and Brescia. Baggio is known as Divin Codino ("The Divine Ponytail") for his hairstyle maybe linked to his Buddhist beliefs. He had some accidents in the first part of his career which did not compromise his talent. He is considered one of the best Italian footballers after WW II.

My husband completed an amazing puzzle of 18000 pieces called ‘Evening Walk in Paris’, 276x192 cm. We had to clear part of the living room to fit the whole thing on the floor and take a photo. It was awesome! 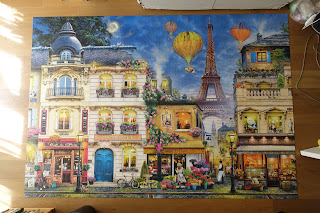 In May there was the Eurovision Song Contest Come Together. I never miss this program and was disappointed when they cancelled it. However, I liked the way it was organised this time, re-proposing past shows and videos of hit songs, such as Volare, Save your kisses for me and Waterloo. The video clips of 2020 entries were a bit short but they gave you the idea of the songs. It was a lovely show with Mr Graham Norton at his best. The most moving and beautiful moment was when the different singers performed Love Shine A Light separately, here is the video: https://www.youtube.com/watch?v=R_xmJcg1iBU&fbclid=IwAR247zHVwaf97peMwjFj36_qQxzbSiSq-YiwkrOAHlcPKY71O73oESAHbz0
I enjoyed it immensely and didn’t miss the competition, which doesn’t seem suitable at the moment, but appreciated the cooperation between the different countries and singers. 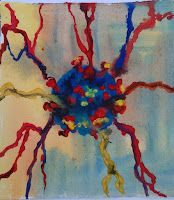 For Easter I made cards I sent to friends in the UK and in Italy and to distribute to neighbours. In my drawings, the flower pattern I used with a flower stamp my daughter gave me ended up strange. I decorated it with felt pens and coloured pencils and then I smeared it with inks and enamels thinking about the virus spreading and ruining people’s lives and families, killing by chance. I struggled to make a finished drawing as sketching provisional pieces seemed the norm in this uncertain period. I doodled as I needed to free my style in order to express my worries and anxieties in a world that is forced to become silent and still but bubbles beneath the surface. I made some loose sketches at the end and a comic strip inspired by the pandemic. 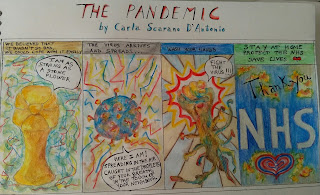 Can I go back to painting leaves, flowers and landscapes? Can I forget about the virus? It seems impossible at the moment, the obsession and worries are too present in my everyday life. At a certain point I decided to give up all my previous projects: cherry blossoms, kimono patterns, bunches of tulips, my daughter’s last fashion collection that I had sketched on my sketchbook journal in Japan. I put aside the many photos I had taken around the area where I live when spring blossoms bloomed in April’s gorgeous weather and the views of deserted streets and squares. I surrendered to my obsession eventually. I painted the scarlet, grey and blue mischievous virus again and again with bewildered pleasure.

The same happened with my poetry. Here is some haiku I wrote on my experience of distancing and isolation:

Queueing at Sainsbury’s
quick chat at a distance
surrounded by blue.

Cycling against the wind
half an hour of freedom
roars in my ears.

Long days of stillness,
no hurry to reach
the end of the rainbow.

Spring bursting
like a muffled bomb
inside my ribs.

The rainbow one was published in Covidioms, a collaborative poem sequence, documenting life under lockdown. The link to the booklet is on Poetry NI website is here: http://www.poetryni.com/covidioms.html?fbclid=IwAR0tr1-68jW1_7LFEIYFyoFsdQaiCEcpQPQIIKAPStfjoT1lNNizmjGo6hk

All poems in the anthology are great, some funny, some moving, all hopeful. My poem is number 88.

Some people say that this period is like in wartime except for the bullets and bombs. It is a suspended time where we are supposed to carry on in view of what would happen somewhere at some point in the future, but we are not sure when and where. Time for withdrawal and meditation which fitted with Lent time but carried on after Easter as well. A delayed time where we do not need to hurry, what we cannot do today we can do tomorrow. No weddings, no funerals, no beginning, no end. Brexit, Islamic terrorism and refugees’ emergency seem far far away. 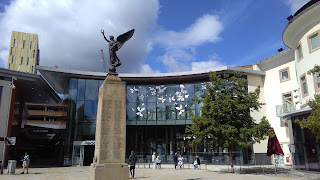 On the whole it was a period characterised by stillness, sadness for the deaths but also an opportunity to thrive in creativity, find different ways of communicating, feeling alive in this unexpected crisis. Would everything go back to what it was before? To what we now call ‘normality’? Probably not. But who knows what will happen in the long term, in five-ten years. Maybe nothing, maybe more.