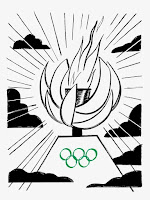 Watching the Olympic and Paralympics Games kept us busy for some weeks. My husband recorded several events at night and we watched them during the day. I mainly followed them online reading articles and watching videos. The opening ceremony had interesting dances including tap dance and enthralling traditional Japanese music. The Olympic
cauldron was amazing, a charming half opened cherry blossom in abstract shapes; it was elegant and simple. Sport is competitive in a positive way and is unifying at the same time. It brings people together; it is powerful and challenging and makes us feel better. However, it might be hard to be a champion and keep the title when you are very young; it is a big responsibility that might crush you. I was impressed by the gymnast Simone Biles’s decision to give up her performance because she felt overwhelmed by anxiety and could not cope with what she was doing. She feared she was harming herself and stopped before it was too late. She was brave and clever to be aware of her limits and at the end she even obtained a medal. I particularly admired Sky Brown too who is only thirteen years old and won a medal. 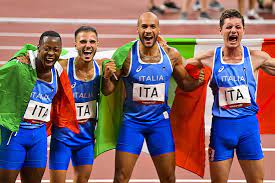 About the Italian team, we had some great moments. My family and I followed the Italian program on RAI 2 in the evening called ‘Il Circolo degli Anelli’ (the circle of rings) hosted by Alessandra De Stefano with famous athletes as guests such as Sara Simeoni, high jump champion in the 1980s, and Jury Chechi, gymnast and Italian champion in the 1990s. They not only gave a summary of the Olympic events of the day highlighting the Italian performances, but they also video called the families of the athletes all over Italy from Sicily, Puglia, Lombardy, Veneto and Sardinia. It was moving and exciting. The families were overjoyed and the athletes were so happy and emotional that you could see how sincere and committed they were. It was also great fun to see how the ‘old’ champions entertained the audience with hilarious jokes and gags. 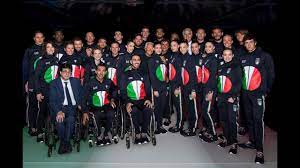 The top Italian performances were the 4x100 won by Lorenzo Patta, Marcell Jacobs, Fausto Desalu and Filippo Tortu and Jacobs’s gold medal in 100 metres. He was considered one of the best runners of the Olympics. He was born in Texas but moved to Desenzano del Garda when he was a few months old. His parents were very young when they met in Vicenza where his father served at Caserma Ederle as a serviceman in the US army. Jacobs started as a footballer when he was a child, but his mother said he was apparently too concentrated on the running rather than on the ball. So, he started to train in sprinting and long jump when he was ten years old and had great results. Other outstanding Italian performances were the two medals in karate, Antonella Palmisano’s and Massimo Stano’s golds in 20 km racewalk and Gianmarco Tamberi’s performance in high jump. I was flabbergasted by the bronze medal won by Irma Testa in boxing. Her coach, Lucio Zurlo aged eighty-three, started to train her when she was fourteen. He was interviewed in the worn-out gym in Torre Annunziata near Naples which is so important for young people who can have an escape from their tough daily circumstances.

The Paralympics ceremony was fun; it celebrated love for life as well as resilience. What impressed me was how much effort, strength and hardiness the Paralympics athletes put in their training and performances. The way they hold a racket in their mouth, jump and run with prosthetics, fence on a wheelchair or swim with one arm or without legs is extraordinary. The performances might be slower compared to the Olympics and they need extra-attention, but the demonstration is unique, challenging and highly competitive. The UK did very well both at the Olympics (fourth after Japan in the medal count) and Paralympics (second after China). Italy was only at the tenth and ninth placements. 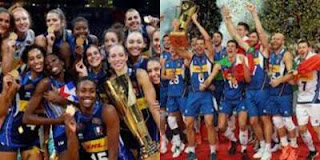 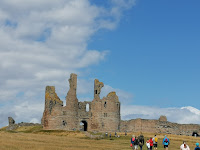 The other highlight of our summer was visiting and meeting family and friends. We visited Dunstanburgh Castle in Northumberland with my son Francesco and his girlfriend Molly. The astonishing injured shape of the castle against the bare ochre and sludge green northern landscape is breath-taking. The leaden North Sea sparkled like silver under the grey sky scattered with ash clouds and occasionally broken by the blue. I took a lot of photos and am planning to paint sketches in watercolours inspired by this scenery. The sun finally broke the thick layer of clouds, so we had lunch outside at the local pub which had special fish dishes. 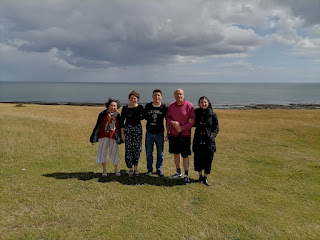 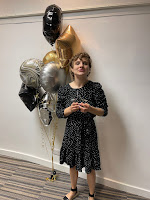 We also met Valentina, our autistic daughter, who has recently won an award for the best aspiring person in her group and for all the improvements she has achieved in the past year. For the occasion, she wore a dress she chose. She looked beautiful and aware of what was happening and she was completely in control of what she was doing. When we saw her, she showed us the prize, a glass star, and the certificate. We celebrated with chocolates and taking photos all together. She looked relaxed and very happy. 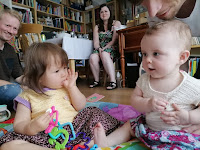 It was thrilling to see my granddaughter Violetta again. She crawls now and is a great fun when she messes about with food. My son and daughter in law came to visit us in the south too and we invited some friends of us who have a little girl, Amelia. I got prepared for the day, not just cooking food but also spreading a soft throw on the floor and scattering cushions and toys all around the living room. I also crocheted two girly dresses for them and took photos. They looked so cute but a bit uncomfortable in the dresses. At first Amelia and Violetta didn’t seem to be aware of one another but at a certain point they exchanged toys. My daughter prepared supplí (fried rice balls with tomato sauce typical of Rome) and my daughter in law made her special brownies. My neighbour Linda contributed with an unbeatable lemon drizzle cake awarded the best ever by all of us. 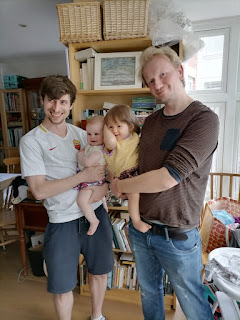 Here are the awesome recipes. I cannot make them as perfect as Layla, Irene and Linda do, but it is worth having a go. 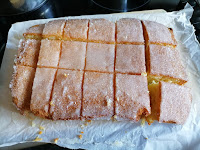 For the crunchy topping you need the juice of two lemons and 175 g of granulated sugar.

Mix the butter and sugar and add the eggs. Add the other ingredients making sure you have a soft even mixture. Line a rectangular tin with parchment paper and pour in the cake mixture. Bake it for about 40 minutes at 160 C. Mix the granulated sugar and lemon juice and pour it on top of the cake when it is still warm. Before serving cut it into squares. 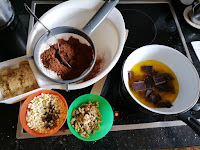 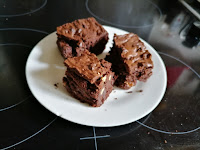 Melt the butter and dark chocolate in a bowl sitting it in a saucepan with hot water. Stir and let it cool. Whisk the eggs with the sugar (brown and caster sugar) for 10-15 minutes. Sieve the flour and cocoa. Fold in the butter and chocolate mixture in the egg mixture and then add the flour and cocoa. Finally stir in the chocolate chips and the chopped walnuts. Pour the mixture in a rectangular tin lined with parchment paper and bake at 160 C for about 30 minutes or until there is a papery crust on top. Leave it in the tin until cold and then cut it into squares before serving. 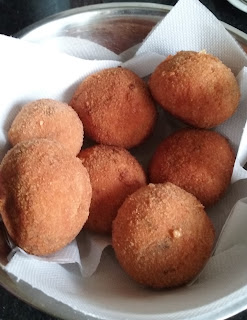 First you have to prepare the ragu sauce. You finely chop or blitz the onion, carrot and celery and put them in an oil covered saucepan (very large). After frying them for a while so they release their flavour in the oil add the mince beef and a small amount of salt to flavour the meat. Keep stirring every so often until over half of the pieces of beef are cooked (but not all). Add the tomato passata, salt, sugar, 2 tbsp of olive oil and some water (put some in the tomato passata bottles/tins to wash them and add to the mixture). Stir the mixture and leave to cook for around 2 hours on the lowest heat setting (no less than 90 minutes and no more than 3 hours). Stir and check every so often. While the sauce is cooking (towards the end), prepare the stock in another saucepan. When the sauce is ready keep it on the low heat and add the rice. Keep mixing almost continuously until you see it has absorbed almost all the liquid from the sauce. Then ladle by ladle add the hot (around boiling point) stock liquid to the mixture. Wait for the liquid to be absorbed and repeat. Taste the rice and you know it will be done when the rice is past al dente and very soft. Be careful not to add too much stock at the end as it should all be absorbed by the rice. When this process is done turn off the heat and add the butter, 2 beaten eggs and the parmesan. Amalgamate everything together and put on a plate or two to cool.

To put the supplí together prepare some bowls with breadcrumbs, flour, beaten eggs and a plate with chopped mozzarella (into cube like shapes). Put some rice mixture in your palm in a cup like shape. Insert some of the mozzarella in the middle and cover with some more rice making a rice ball with the mozzarella inside. Be careful not to leave any holes (as the mozzarella will leak out when frying and open the supplí), don’t make the rice walls too thick (as the mozzarella might not completely melt when fried) and don’t make the rice ball too big as it will be more difficult to fry and will require more oil. After making the shape you want cover in flour to seal any small holes, then pass in the egg and finally cover in breadcrumbs. Place on a clean plate ready to fry. Repeat the process until all the rice is gone. Then prepare the oil in a large saucepan (you can start doing this while you are making the rice balls) and when hot place as many balls as you can inside leaving space for the rice balls to move. Make you they are covered or mostly covered and move then every so often. Prepare a large bowl with some kitchen roll covering it to absorb the oil and place the fried balls inside once they have a golden caramel colour. Repeat until all the rice balls are fried and serve right away.