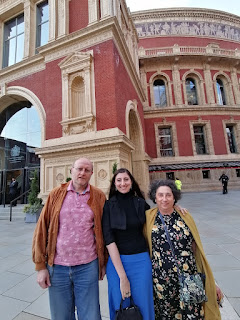 Attending events again after the restrictions of the lockdown with all the variations and shades was so enthralling, almost mesmerising. Taking the train to London, walking in busy streets, dressing up for the event and having new experiences and stimuli was refreshing. I managed to attend Cinderella by Andrew Lloyd Weber at the Gillian Lynne Theatre after two failed attempts due to cancellations because of Covid-19 rules. For the first time in my life, I attended the Proms at the Royal Albert Hall and a spectacular performance of My Fair Lady at The Grange Festival in their fabulous venue in Hampshire. I also attended Yay! The Search for Happiness with Robert Garnham whose collection I reviewed here for Write Out Loud https://www.writeoutloud.net/public/blogentry.php?blogentryid=116602  It was part of Guildford Fringe Festival; a cracking show Robert took around the UK during the summer and beyond. At Guilford I also attended the concert of Guildford Youth Symphony Orchestra at the Holy Trinity Church featuring Britten, Puccini, Strauss and Tchaikovsky. The age range of the players went from 13 to 26 years old; their performance was impressive. We
also booked for a concert that celebrated Gershwin at the Royal Festival Hall at Southbank with the London Concert Orchestra on 12th September but unfortunately, we missed it as on that day the M4 was shut for roadworks. We were completely unaware of this disruption or we would have taken a train and were trapped in the traffic for more than two hours without being able to reach London. My husband is so passionate about Gershwin that he even did some research before the concert and printed handouts. The show included some of the most famous pieces by Gershwin such as The Man I Love, Somebody Loves Me, Lady Be Good, Rhapsody in Blue, Summertime, and many other famous songs. Tap dancing and ballroom dancing were included in the program too. It was disappointing but there was no way to change it.

The Proms were a revealing experience not just because the Royal Albert Hall is a beautiful venue and the concerts were fabulous, but also because of the way the orchestra and the conductors engage the audience with introductions and comments on the pieces of music they are going to play. They make the audience feel part of the show and you enjoy it much more than a traditional concert. We attended Dvorak’s New World Symphony which is intermingled with American songs and spirituals. In the program of the day there were also Charles Ives’s Three Places in New England and Augusta Reed Thomas’s contemporary piece of music that took inspiration from the effects of the proteins that a vaccine activates in the body. We also attended the concert that featured Stravinsky’s The Firebird but played from memory along with Rachmaninov’s Rhapsody on a Theme of Paganini. At Cadogan Hall we had the opportunity to listen to The Sound of Argentina, a colourful concert with music by Astor Piazzolla with fabulous tango music and songs that he first played in bordellos and then in cafes and nightclubs in Buenos Aires. After such a long silence due to the pandemic, music was a reinvigorating means to communicate our renovated contact with people and the world around us. They were life-enhancing moments that though temporary are nevertheless meaningful. 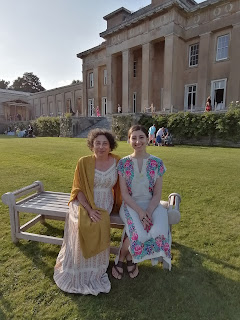 Another fabulous music event I attended during the summer was at The Grange Festival (https://thegrangefestival.co.uk/). It was not easy to reach the venue as the Satnav was guiding me to an HGV parking place, but I spotted the entrance gate of the festival at the last minute and got into it. The edifice was in the middle of a large estate and it took us about ten minutes to reach it following a winding path. The parking place was in a meadow and finally we walked to the place in our uncomfortable high heels. But it was worth it. My Fair Lady was beautifully sung and played, fabulously entertaining. Everybody knows the story with all the issues related to language and correct pronunciation that shape identity and assigns people a place in society. Eventually Eliza can choose her destiny but only after going through a series of tortures of sorts such as speaking with pebbles in her mouth, staying awake the whole night repeating sentences and even starvation. As soon as she manages to pronounce words correctly according to the rules of standard English, she goes up in the social ladder, which emphasises the importance of language but also its ephemeral implications. From today’s perspective, some songs sound sexist, but the music is so involving and the singers were so good that I forgot all those issues. We had an hour and a half interval between the first and second part of the program, so we had plenty of time to visit the venue and the park and to have our dinner. People were having their picnic sitting on benches, around tables or on grass. Men were dressed in impeccable suits and bow ties and women in evening outfits. The weather was gorgeous and the whole experience was remarkable and extremely enjoyable. 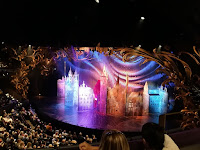 The musical Cinderella was the other event I couldn’t miss. The rags-to-riches tale is so famous and re-invented in different versions throughout time that I was curious to see what they could make of it today. Apparently, the story dates back to ancient Greece and was published for the first time by Charles Perrault in 1697. In centuries the tale has had different interpretations and is present all over the world. The day I attended the show, Georgina Onuorah played ‘bad’ Cinderella. She is characterised as an outcast but people around her seem to admire her defiant and alternative attitude, especially Prince Sebastian, who is second in line to the throne to Prince Charming (who apparently disappeared but turns up at the end). Misunderstandings, funny scenes, witty remarks and above all
marvellous songs and spectacular dancing make the show a real hit. Needless to say, Cinderella is not a submissive character and the world of fairy tales is reversed but also affirmed in the final happy endings though they are open to an adventurous future. Ethnic and gender diversity are present and recent events and movements are alluded to, such as Black Lives Matter (Cinderella says ‘I can’t breathe’ at a certain point) and MeToo in the picture of Leda and the Swan above the fireplace. Everything fits in in this new and updated version of the timeless story. 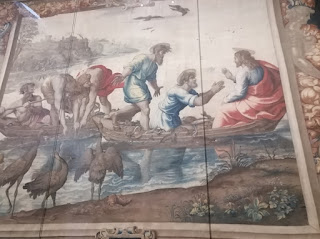 At The Lightbox in Woking I attended an exceptional event organised by the Exhibition Circle; it was a dinner with a special guest, Dr Tristram Hunt, director of the V&A. It was an elegant happening with good food and good drinks. What I was looking forward to was Hunt’s speech which focused on the importance of supporting art and on the V&A collection. He especially mentioned the Raphael cartoons which I had visited in one of my recent trips to London and which can be viewed online too. They are remarkable pieces where the figures are dynamic and in constant movement. The stories from the Gospel are told in a sort of cinematic way, emphasising the central characters. They are so lively that they seem to speak to us. 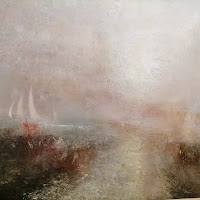 I also visited the exhibition of Turner at Tate Britain and revisited the Turner collection and Henry Moore’s works as well. Turner always surprises me especially his sketchy later works which are so inventive, original and artistically innovative that I believe he is one of the best painters ever. I am planning to study more of his work, the pictorial techniques he used and his career. The connection with Rothko (who is another painter I am discovering) they make at the Tate is also interesting and is inspiring me in new ways of painting. Visiting exhibitions and learning from the masters is crucial to develop ideas and painting techniques. It is similar to the importance of reading and attending poetry readings for a poet. Unexpected words and images from other poets inspire further explorations and there is always something to learn. 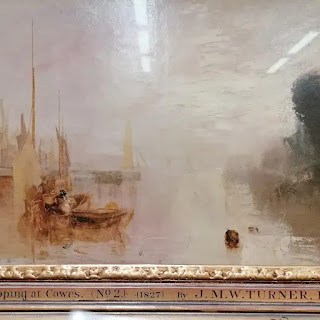