The days are growing warmer and the light comes from the window earlier in the morning. My outdoor duties at school are more pleasant. I enjoy the sun and already feel in a holiday mood. I am looking forward to the Easter break as I terribly need a proper rest. I worked 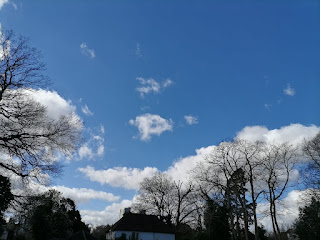 hard in the past few weeks, not just at school in my TA role but also at home completing a conference paper on Margaret Atwood’s poetry. I analysed her latest three collections, Morning in the Burned House (1995), The Door (2007) and Dearly (2020). It has been an involving and engrossing work that absorbed most of my time for more than a month. Here is one of my favourite poems from Dearly:

In the early morning an old woman

is picking blackberries in the shade.

It will be too hot later

Some berries fall: those are for squirrels.

Some are unripe, reserved for bears.

Some go into the metal bowl.

Those are for you, so you may taste them

just for a moment.

after another, then quickly gone.

Once, this old woman

I’m conjuring up for you

would have been my grandmother.

if you’re quite lucky.

The hands reaching in

among the leaves and spines

were once my mother’s.

I’ve passed them on.

Decades ahead, you’ll study your own

Don’t cry, this is what happens.

is almost full. Enough for all of us.

we hang on trees in December

to remind ourselves to be grateful for snow.

Some berries occur in sun,

but they are smaller.

It’s as I always told you:

the best ones grow in shadow.

And my response to Atwood’s poem:

The best ones grow in shadow

I see blackberries gleaming in the sun

the biggest and ripest ones recede in the deepest undergrowth –

they will feed blackbirds and sparrows

or melt in the mud.

I have no plastic bag or bowl

so I gather them in my surgical face mask,

collect quite a few

their wild taste bursts black under my fingers.

I feel satiated by the little sweetness,

that absorbs the late summer sun.

I make off with my bundle of pitch-dark garnets –

furtive as I go.

seal the jam in jars

with the label Gratefulness.

I played Wordle recently and was lucky to get the right word in a few attempts. The last one was RENEW, an inspiring and appropriate word for springtime. I feel renewed and my article on Margaret Atwood’s poetry is actually about renewal, transformation through storytelling that for Atwood happens in a voyage into the underworld. In her latest collections it is also connected with ageing and consequently death. But her view is not completely negative, on the contrary the ageing of the body causes a transformation that she interprets as a renewal. We need to acknowledge and accept our mortal condition but also look for transformation, a change that is revitalising.

My working week is full though I am getting used to the rhythm of my job and am better organised now. I have hectic weekends where I pack all the things I cannot do during the week, e.g., yoga classes, swimming, workshops, shopping and visiting my autistic daughter Valentina in Redhill. I try to take it easy and say to myself that what I cannot do this weekend I will do the next one. I noticed that I usually lose a kilo during the week and re-gain it in the weekend. I still wear trousers, boots and long woollen dresses but some of my colleagues are already wearing summer dresses with thin cardigans and sandals. It is difficult to choose what to wear in this period of the year as it is still chilly in the morning when I start the day, then it becomes bright and warm. It might change again before Easter and go back to wintry weather and perhaps settle after Easter. Who knows?

Russian invasion of Ukraine seems unstoppable. They say Russia may use chemical weapons and have Chinese military support. Poland might be in danger too and Ukrainian refugees continue to flee the country. The news show shelling, devastation and people crying. Isolating Russia’s economy doesn’t seem to solve the conflict. Zelenskiy declared that Ukraine is not going to join NATO, but this doesn’t seem to be enough for Putin. I wonder what he wants, does he really want to conquer Ukraine and make it part of Russia? The Russian advance is slow and the Ukrainian resistance is tough. Putin’s battle is lost as Ukrainians will never give up even if the Russian army covers the whole territory. And how should the West support Ukraine without provoking the potential escalation of the conflict?

The return of Nazanin Zaghari Ratcliffe after six years of imprisonment in Iran was great news. I was so touched by her husband Richard’s campaign for her liberation, with sit ins and hunger strikes and his relentless appeal to authorities. He adopted the right strategy though he was often criticised by the authorities. The newspapers wrote about the power of love but apparently money counted more than love. The newspapers reported about a debt of £ 400m that dated back to the 1970s about arms that the UK never delivered. Eventually the two governments reached an agreement and Nazanin was released. Does the need for gas and oil from countries other than Russia have anything to do with this story? Nazanin suffered physical and psychological torture in Iran. She could have died in prison. It is incredible how much global events can affect ordinary people’s lives. In the interviews she looks beautiful and fit and ready to re-start. Her resilience and strength are amazing, an example for all. 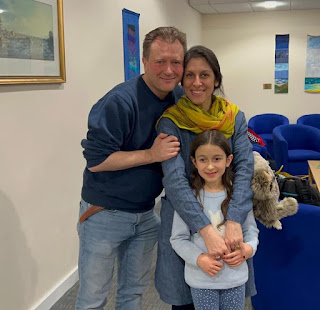 I will fly to Italy during the Easter break and I am planning to visit some exhibitions in London when I come back. Maybe I will squeeze a visit to the cinema before going back to school too. I am intrigued by the films nominated for the Oscar awards, such as Coda, West Side Story and The Power of the Dog. Here is the link to an interesting article from The Times on Oscar 2022 predictions:

I am crocheting bunnies and eggs and experimented making Ukrainian biscuits and a Japanese cake for my daughter’s birthday. Here are the recipes. I hope they will be useful for Easter time in alternative or together with the traditional chocolate eggs. 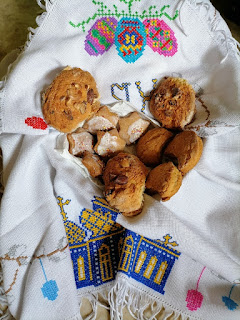 For the dough you need: 200 g of self-raising flour, some warm milk, two eggs,

For the filling you need: 50 g of ground almonds, one tbsp of melted butter, 1/2 tsp of ground cinnamon.

Mix all the ingredient for the dough and chill it in the fridge for half an hour.

Prepare the filling melting the butter in the microwave and adding the other ingredients.

Roll out the dough and spread the filling on half of the dough. Fold the sheet over then cut the moons with a biscuit cutter. Bake the biscuits on a grease oven tray for 15-20 minutes at 180 C or until ready and finally dust with icing sugar.

You need: one egg and one yolk of an egg, four tbsp of honey, ½ tsp of ground cinnamon, ½ tsp of ground cloves, 200 g of self-raising flour, some warm milk, 50 g of melted butter; icing sugar and the white of an egg for the glaze.

Mix all the ingredients for the dough starting with the honey, the butter and the milk then add the eggs, cinnamon and cloves and finally the flour. Roll out the dough and cut the biscuits with a biscuit cutter, I used the shape of a star. Bake the biscuits on a grease oven tray for 15-20 minutes at 180 C or until ready and finally prepare the glaze by whisking the white of the egg and adding some icing sugar till the mixture is thick. Spread the glaze on the biscuits and decorate with sprinkles.

You need: 100 g of melted butter, two tbsp of sour cream, one egg and the yolk of an egg, 100 g of sugar, 200 g of self-raising sugar, some vanilla extracts, 50 g of chopped nuts and 50 g of dried fruit soaked in warm water and liquor; white of an egg an icing sugar for the glaze.

Soak the dried fruit (e.g., raisins, apricots, mixed peel) in warm water and liquor. Mix all the ingredients of the dough and add the dried fruit. Form a roll and cut it into circles of half an inch. Place the circles on a tray lined with parchment paper and glaze with the whisked white egg mixed with icing sugar. Bake the biscuits for 15-20 minutes at 180 C or until ready.

You need: 200 g of strawberries, the juice and the grated zest of a lemon, 100 g of white caster sugar, 50 g of soft brown sugar, 200 g of self-raising flour, 100 g of soft butter, two eggs, some drops of vanilla extracts, two tbsp of single cream; parchment paper.

Prepare the strawberries. Chop them in a bowl and add one tbsp of sugar and the juice of a lemon. Prepare the dough whisking the butter and the sugars then add the eggs.  Add the rest of the ingredients and finally fold in the strawberries. The mixture should be sticky so use a spoon to place the biscuits on an oven tray lined with parchment paper. Bake the biscuits for 15-20 minutes at 180 C or until ready. 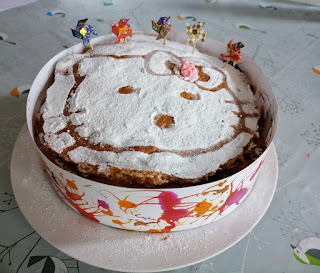 For the sponge you need:  six eggs, 150 g of self-raising flour, ½ tsp of baking powder, ½ tsp of bicarbonate of soda, 50 g of cornflour, 100 g of white caster sugar, 50 g of melted butter, 100 g of double cream; parchment paper and icing sugar to dust

For the filling you need: some raspberries and 300 g of whipping cream.

Warm butter and cream. Whisk the eggs with the sugar for 10-15 minutes. Add the cream and butter mixture and fold in the flour together with the baking powder and the bicarbonate of soda and the cornflour. Line a round tin cake with parchment paper and pour in the cake mixture. Bake for 30-40 minutes at 180 C or until ready. Let it cool then cut it in half and wet the two halves with milk mixed with some sugar. Whip the cream with two tbsp of sugar and add the raspberries. Spread the cream on the base of the cake and place the other half on top. Decorate the top with icing sugar and chill in the fridge before serving. At The Park School the student made delicious fairy cakes for Red Nose Day and scones just before Mother’s Day. They were so good that they sold out and we all had sugary snacks during the breaks. My students are also working on religious pictures inspired by Jesus Christ’s passion and resurrection. I think their approach is very original though it might seem naïve at first sight. But this is the reason why I find their artwork so fascinating and unique.

My daughter took part in an art project at ISL London for the Sakura Festival, that is, the two weeks dedicated to the blooming of cherry blossoms and to spring. She helped the Japanese students build up trees with more than 2000 origami cranes attached to the branches. An amazing achievement. 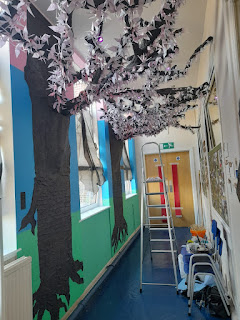 I am intensifying the writing of occasional pieces, that is, essays on Margaret Atwood and other writers or poets, poetry and art reviews, which are mostly commissioned by online magazines such as The High Window, London Grip, Tears in the Fence, Write Out Loud, Pulsar, The Temz and others, or requested by fellow writers that like my style of reviewing. I am very glad they appreciate my work and I enjoy this job.

I hope the Easter break will bring good weather and rest to everybody despite the difficult times that seem to endure in our frantic world. 👍💮🌸