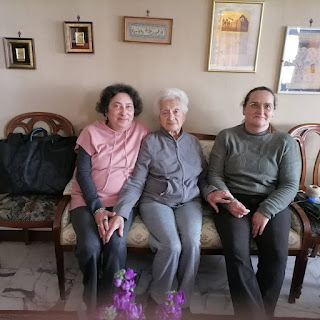 Every time I visit Italy I am flabbergasted by my mum’s simple tasty dishes, my mother in law’s delicious food and unbeatable ice-creams. My mum made minestrone and her special artichokes just for me and a fantastic baccalà (salted cod) with asparagus on Friday. I had a walk in the centre with a friend to visit Crazy, an enthralling exhibition on contemporary art at Chiostro del Bramante near piazza Navona, and took the opportunity to have a granita al caffè (coffee iced granita) with cream and a maritozzo (a bun filled with whipped cream) at Tazza D’Oro, which is a famous café near the Pantheon. We also had a family celebration for my mother in law’s 80th birthday at a restaurant with homemade fettuccine and cannelloni, lamb chops and fruit tart. My son Lorenzo with Layla were with us too. At the party my granddaughter Violetta looked so cute with her pink dress. She was overjoyed to walk around the venue and welcomed anyone who wanted to pick her up. 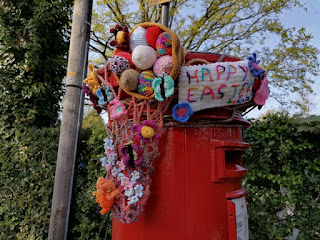 The winter term was long and cold, especially before the Easter break.  I felt I really needed a good rest. Before leaving I prepared some little presents for friends and family, crocheted eggs, bunnies and chicks, and cards with my poems on flowers. In Rome I spent most of my time with my mum visiting her friends and neighbours. She stays at home most of the time now as she gets tired very easily. We had a walk together one day and I realised she needed to sit and rest from time to time. Taking public transport is too much for her and in the evening she often falls asleep in front of the TV. She still knits a lot; her work is flawless and tidy. At the moment she is knitting a blue cardigan with a complex pattern of interweaving braid stitches on the front. While I was with her, I worked on my crochet project to cover a post box with Easter eggs, spring flowers and butterflies back home. I sowed them on the top of a post box in Park road in Woking when I came back. It is near The Park School where I work. I enjoyed doing it and I think it looks pretty. When we came back to the UK my sons came to visit us in the south, so we had more time with Violetta. She explored the house and the garden too. The weather was so gorgeous that we could spend a lot of time outside. Violetta was so proud she could go wherever she wanted that it was hard to stop her and take her inside. I made biscuits with olive oil instead of butter and chocolate budino (jelly pudding) with oat milk for her as she does not tolerate milk and diary products. She enjoyed them very much and asked for more and more budino. I gave her some new toys too, a book of Spot, the yellow puppy, with flaps to lift to discover colours, shapes and numbers, the Peppa Pig family and some activities I found in England and in Italy where Peppa Pig is popular too. 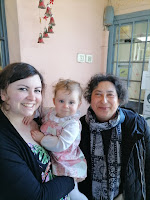 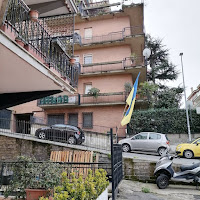 In Italy the weather was warm and sunny most of the time. Newspaper articles and TV programmes mostly focused on the war in Ukraine and on the Italian economic crisis due to the sanctions imposed on Russia. Sometimes there were updates about Covid. In talk shows on La7, such as Otto e Mezzo, hosted by Lilli Gruber, Atlantide hosted by Andrea Purgatori, and Di Martedí, hosted by Giovanni Floris, different opinions emerged. Most of the journalist and part of the audience agreed that Putin invaded Ukraine and that the Russian army is committing war crimes. However, a minority suggested that Putin was provoked by western governments that allowed Ukraine to apply to enter NATO. Apparently, Russians claim that after the fall of the Berlin wall in 1989 there was an informal agreement between Mikhail Gorbaciov and George Bush that NATO would never expand its influence in the area of the ex-soviet countries. 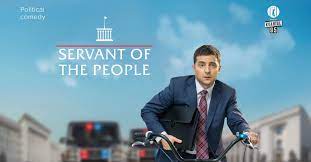 Putin has been compared to dictators like Franco and Stalin and, similarly to what happened during the Spanish civil war in 1936-1939, people from all parts of the world are joining the fight against Russia, especially from the USA, Canada, UK and Italy too. On the other hand, there are people who support Russia and think that the Bucha massacre is fake news. They believe that it is fiction with background actors and dummies to perform the roles of tortured prisoners and dead people. The alleged rape of women and burned children are also considered fabrications. It is a disturbing parallel reality that questions our communication systems based on Youtube videos and social networks. It seems there is no safe ground to rely on. The images of the war are broadcast live minute by minute but I have the sensation that we don’t know what is really happening.

Zelensky asks for more weapons to stop the bloodshed, which is a contradiction in itself. Certainly, he is a better communicator compared to Putin. Zelensky is less formal both in his speeches and in his outfits. He speaks to the people using videos recorded on his phone not only about the war but also about his everyday life. For example, about what time he wakes up, what he has for breakfast or about his gym sessions. In Italy LA7 broadcast Servant of the People, the Netflix fiction series where Zelensky plays the part of the protagonist, a history teacher who becomes president. He is an ordinary person who wishes to abolish corruption, goes to the Parliament house by bus and cuts the government jobs that he considers redundant and a waste of money. On the other hand, his family takes advantage of his position and go out shopping for free. Before becoming president, Zelensky was a popular comedian and actor both in Russia and in Ukraine. One of his most popular sketch comedy scenes featured him wearing ostrich feathers and stiletto heels. He was compared to Ronald Reagan and to the Italian comedian Beppe Grillo, co-founder of the political party Cinque Stelle (Five Stars). Zelensky is a new figure, a hopeful alternative to the establishment and he is also supported by the Ukrainian oligarch Ihor Kolomoisky, for whom he worked as an actor and entertainer in his media network. Now the president is the symbol of Ukrainian resistance. His speeches are so poignant that even the interpreters cry when they translate his words.

In Italy prices are rising due to the war, e.g., pasta plus 15% and milk is sold in smaller packages for the same price as before. Oil and gas supplies are the biggest problem. The government is looking for different sources of raw materials, which Italy lacks, in the USA for example, but the prices are higher compared to Russian supplies. Another alternative is the Mediterranean area, e.g., Algeria. However, it seems impossible to cut the supplies of Russian gas completely. The PM Draghi said: ‘Do you want peace or the air conditioner on?’, suggesting we need make some sacrifices and use less energy or find an agreement with Putin in some way. In council offices they are going to decrease the heating from 22 to 20 degree centigrade in winter and increase the air conditioning from 19 to 21 in the summer. Pope Francis lifted a Ukrainian flag in St. Peter’s quare after the massacre in Bucha and pleaded to stop the war. War crimes were also discussed in talk shows but apparently it is very difficult to prosecute Putin as he should be arrested and taken to the International Criminal Court seated in The Hague. They cannot prosecute in absentia. Furthermore, countries such as USA, Ukraine and Russia don’t recognise the ICC. 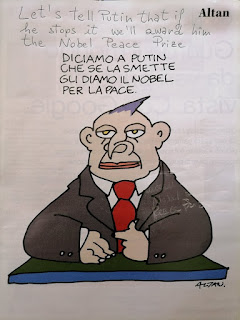 Another solution could be to divide Ukraine into two influence areas as it happened with North and South Korea. Ursula Von den Leyen visited Zelensky and promised to support his country with millions of Euros and also to allow Ukraine to join the EU as soon as possible. Putin also allegedly helped Donald Trump to win against Hillary Clinton, which might be considered a betrayal of sorts on both sides. In the end, Russia is still powerful and the sanctions are damaging its economy but they have an impact on western economies too. Millions of refugees are fleeing the country. In Italy Ukrainians obtain a visa in a few days while refugees from other countries might take months, sometimes years or even be expelled eventually. Ukrainian soldiers are not giving up though their counterattack does not seem to be stopping the Russian army. I wonder if we are in a standby situation or if there will be more serious consequences in the near future.