It has been a long hot summer, and I loved it. No drizzle or grey skies for weeks. A real summer, a bit too hot at times but I felt I needed it after such a cold winter and unstable spring. My flowers bloomed in the back garden and I had ripe tomatoes for salad and caprese, and zucchini to make frittata. I must say in Rome it was definitely too hot, 35-40 C most days with an average of 50% humidity. My mum has air conditioning at home and fans too, so we survived, but at times I felt dizzy and had headaches. The only way to get through the day was staying still in front of a fan or go to bed and have a nap. 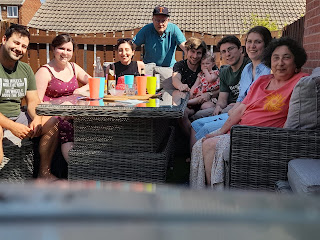 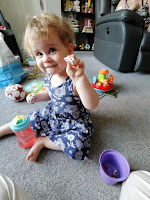 Before leaving for Italy, we travelled north to see my sons. We all gathered in Wakefield where my eldest son lives. We had a whole day altogether, had lunch outside and enjoyed the good weather. I made lasagne and polpettone and my daughter in law made her exceptional brownies. We spent two days with my sons and followed my granddaughter Violetta in her explorations in the garden. Now she speaks a few words: mamma, papà, all gone (when she finishes her food), her version of ‘shoes’ (when she wants to go out), ba for ball, ‘cacca’ (poo), car, ta for thank you and she repeats some animal sounds like woof and quack. We went through all her books together. She loves the peek-a-boo ones, and she likes playing pee-a-boo too. She claps her hands and giggles when she is happy about what she is doing and likes playing with pebbles. Her curiosity about what is around her is so typical and yet surprising for me; I love seeing her so active, engaged and joyful. Now she has a cousin, baby Jupiter born in June from one of my daughter-in-law’s sisters, so she is no more the only little girl in the family. I brought a new swimming suit with Peppa Pig
patterns but apparently she prefers the cartoons of Thomas the Tank engine at the moment. 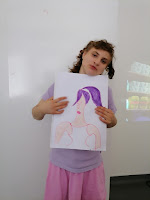 We also visited my autistic daughter Valentina before leaving. We had such a good time outside in the garden with her where the staff of the house organised a barbeque. We played with her inside too, blowing and hanging balloons and making drawings of her favourite cartoon characters, Leela and SpongeBob. She loves doing craft stuff so I always try to find new things she can use and be creative with.

Little by little I started to relax from the busy year, enjoyed the long days, the sunshine and the light clothes I could finally wear without feeling too cold. It took a few days to change my routine and recover energies once the school year ended. I still had some house works to do that I had left behind and some writings to complete before going on holiday but eventually I met all the deadlines. Before flying to Italy, I felt I really needed to be disconnected from all my commitments for a while.

My daughter, my husband and I spent a day in London before leaving. We visited exhibitions and attended an evening performance of the Proms 2022 at the Royal Albert Hall. The concert featured the ‘Miners’ Hymn’ by Jóhann Jóhannsson, a haunting dark piece that evoked the miners’ sufferings and hardships. It was followed by Sergey Rachmaninov’s ‘Piano Concerto No. 2 in C minor’, romantic then suddenly dramatic with a grand finale. After the interval they played ‘The Fact of the Matter ‘by Hildur Guðnadóttir, a BBC commission, and ‘Fantasy-Overture ‘Romeo and Juliet’’ by Pyotr Ilyich Tchaikovsky which alternated the joy of dancing with a beloved, revealing the love blooming between Romeo and Juliet, and the drama of the reality they lived through in tragic notes and clashing sounds. 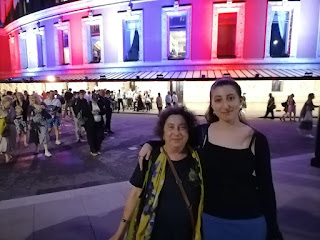 We attended the Citi exhibition at the British Museum, ‘Feminine Power: the Divine and the Demonic’, which impressed me for the variety and amount of artefacts and artworks on display. The captions and comments were engrossing too and covered all the possible sides of how feminine power is seen all over the world and throughout centuries. Here is the link to my review on London Grip: https://londongrip.co.uk/2022/08/feminine-power-the-divine-and-the-demonic-review-by-carla-scarano/

I also visited the summer exhibition at the Royal Academy of Arts. I was flabbergasted by the diversified quality of the artworks with more than 1,400 pieces on display from about 15,000 submissions. I submitted a piece too, a crochet installation inspired by global warming, but it wasn’t selected. I will try again next year. Here is the link to my review of this impressive exhibition: https://londongrip.co.uk/2022/08/royal-academy-of-arts-summer-exhibition-2022-review-by-carla-scarano/ 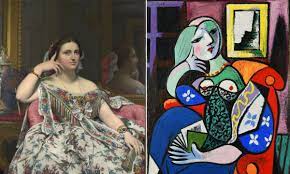 I couldn’t miss ‘Picasso Ingres Face to Face’ at the National Gallery; it was such a great idea to display ‘Madame Moitessier’ (1844-1856) and Picasso’s ‘Woman with a Book’ (1932) side by side. There is a connection between the two works as Picasso cheekily acknowledged the influence of Ingres’ picture. The transformation from one work to the other is striking and speaks volumes about artistic interpretation and evolving styles. The two paintings were completed more than seventy years apart which gives an idea of how much art changed in the 20th century. There is more freedom of expression in Picasso’s piece, but it is not unleashed and loose, on the contrary his work is thoughtful and controlled. I was particularly impressed by Ingres’ technical skills in rendering the subject’s skin and dress that look so smooth and real. In Picasso, his young lover, Marie-Thérèse Walter, reveals their reciprocal passion in the colours and pose. We can imagine a conversation between the two paintings in which Picasso’s piece comments and reflects on art and how to make it different from what it was supposed to be in the past.

At The Lightbox in Woking the wonderful exhibition ‘Canaletto and Melissa McGill: Performance and Panorama’ was on (and will be open until the 13th of November). I was lucky to have the chance to meet the American artist Melissa McGill when I visited the exhibition and had an interesting conversation with her in Italian, as she lived in Venice for two years and knows the language. The show explores Canaletto’s (1697-1768) pictures of Italian and English landscapes alongside Melissa McGill’s (b. 1969) art project ‘Red Regatta’, presented in Venice in collaboration with Associazione Vela al Terzo. Here is the link to my review: https://wokingwriters.wordpress.com/2022/08/06/canaletto-and-melissa-mcgill-performance-and-panorama/ 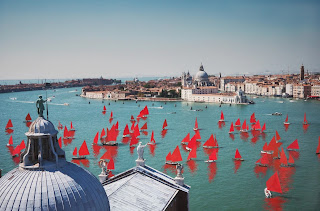 At the end of July, both Italian and English politics were in a mess that lasted throughout summer. In the UK the forced resignation of Boris Johnson started a race in the conservative party for the leadership. In Italy, Mario Draghi’s government lost the vote of confidence of part of the coalition and consequently fell. The Five Stars party voted against Draghi and then split in two parties, the Five Stars led by Giuseppe Conte and Insieme per il futuro (together for the future) led by Luigi Di Maio. What seemed a good agreement was therefore broken despite the fact that the economy was recovering and the government was coping well with the fuel crisis and the Ukrainian conflict. The political crisis triggered early general elections, which will be on the 25th of September 2022. As a consequence of this political turmoil, both in Italy and in the UK, most of the newspaper articles and TV programmes were about politics, candidates, coalitions and proposals on how to tackle inflation as well as price and fuel rises, though the war in Ukraine was still raging and refugees flocked to European coasts (about 2,000 in Lampedusa only in August). Apparently, people need change or just feasible solutions. Liz Truss seems the favourite though her plan to cut taxes was labelled as unrealistic and should go together with the reduce of spending, according to some commentators. Sunak fell behind and more and more MPs supported Truss, Johnson included. 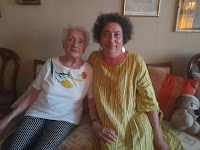 In Italy, coalitions of parties started to form in July polarising on two main groups at first, the right and the left. But then a third group appeared formed by a centre-left of sorts that neither agreed with the right wing nor with the left Democratic party (PD) led by Enrico Letta. The coalitions are mainly based on political programs but also on voting polls. Apparently, the right is winning, according to the voting polls, with a fluctuation of 60-80% of the total votes. However, this might change as it is possible that it doesn’t reflect people’s choices as a good percentage of people are not going to vote. To make things even more complicated, the new Italian electoral law doesn’t allow a clear-cut winner as it is a mixture of uninominal and proportional systems. Brothers of Italy, a far-right party led by Giorgia Meloni, seems to be at the top together with Lega, led by Matteo Salvini, and Forza Italia, led by the octogenarian Silvio Berlusconi. I don’t like their ideas and their programs, but I understand that they are consistent and that Meloni is a charismatic leader. Would she be able to deliver her program and rule the country if she is elected? I doubt it, and I don’t trust Salvini or Berlusconi either. I feel they are well below average as politicians compared to Draghi.

At the end of July I reached my mum in Rome facing the heat and a period of total rest, which I really needed.