The move from Lancaster to Surrey took most of our energy and time so we didn’t have much time left for leisure, outings or holiday trips. Besides, Valentina, my autistic daughter, was at home with us all the time so we had to take turns to have a bit of rest.

My eldest daughter and I decided to book to see the Alexander McQueen exhibition, Savage Beauty, well in advance in order to not have any excuses and miss it. On the day of the exhibition we left the house, still full of half unpacked boxes, and had our day out in London. We forgot all the stress of the move as soon as we got on the train to Waterloo, everything in the city was as lively and exciting as ever and the V&A was in full charm.

The Alexander McQueen exhibition was dazzling, total creativity expressed in sheer artistic constructions. At the entrance there was a huge photo of his face (an ordinary British bloke) that slowly changed into a skull mask (the same image is on the cover of the Metropolitan Museum of Art exhibition’s catalogue titled Alexander McQueen: Savage Beauty) that welcomed the visitors. It set the tone to the whole exhibition: beautiful, weird and unsettling but also clearly made up in its unique entertaining aim to provoke and appeal in a subtle game of pleasure, shock and horror.

All his most famous collections were there: Nihilism (spring/summer 1994), Birds (spring/summer 1995), Highlander rape (autumn/winter 1995), the Hunger (spring/summer 1996), It’s only a game (2005), the Widows of Culloden (autumn/winter 2006) and Plato’s Atlantis (his last collection, spring/summer 2010). His precision in tailoring, pattern making and placing was pure perfection, combined with utter renewed originality. He was often inspired by the wilderness and beauty of the natural world but also by historical events and art in general. A tamed savagery, well cut and perfectly sewn, horror and romance, what the Romantics would call sublime.

His collections always had a story, a narrative that was inspired by his interests (e.g. nature) or his Scottish background, revisited in a continuous tension between wild imagination, technology and showmanship. It was a unique experience, I could see again my favourite dress (I had seen it in another exhibition at the V&A, titled Ballgowns, in 2012), a black and white organza dress with a symmetrical pattern of two praying women with crows soaring above them on the front of the dress, innocence and darkness facing each other in a never ending confrontation.

I spent a long time sitting in the central room of the exhibition, the walls covered with his fabulous headgears, alternating with corsets, shoes and other accessories. Video clips of his catwalks on the wall bewitched the viewer. In the centre of the room there was the famous spray-painted dress, it was robot jet sprayed during one of his best and most entertaining shows.

After Savage Beauty, my daughter and I thought we hadn’t had enough and opted to go see Shoes: pleasure and pain, in the V&A fashion wing. It was interesting, though after Alexander McQueen everything else seemed dull. The shoes on display were from several countries and ages. The leitmotif was “Cinderella shoes that can change life and transform who you are” for better or for worse. Other popular shoes from folk tales were taken into consideration, like the red shoes from the Danish story and the seven leagues boots. Shoes are a status symbol undoubtedly, to constrain and show off, sexy shoes like stiletto pumps, platforms as symbol of power, heel-less shoes, shoes with turned up toes or iron spring patterns, clogs and tiny Chinese lotus shoes. And who ever believed that shoes were only made to walk comfortably will be proved wrong, they represent an identity, send a message and embody a character. 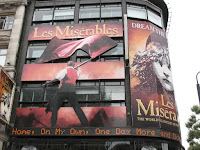 On another day we also managed to go to the cinema and watch Inside Out by Pixar Animation. I enjoyed it very much, the idea of describing only a few days of a girl’s life through her emotions was ingenious. Her crisis, the characters representing her emotions, the humorous bitter-sweet ending, everything was so well narrated, gripping and entertaining that I had a total catharsis at the end. 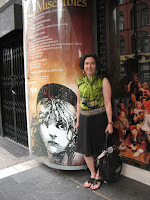 A part from shopping (my husband had run out of trousers and jackets, all worn out, so we spent a whole day looking for a big M&S store in the area and then had the rest of the day in it while he tried on one item after the other), my most exciting outing was going to see Les Misérables the musical, at the Queen’s theatre in London. It was wonderful; I loved the film, still watch it on the DVD and listen to the soundtrack from time to time, but the live performance blew me away. It is so much more involving in a theatre, so alive, real, mesmerizing. I loved it.

After the show, we walked through Chinatown in a mild drizzle. We bought some Chinese treats (sticks with peach, green tea and strawberry flavour called Pocky) and took photos of some amazing Chinese cakes.

It wasn’t much but I thoroughly enjoyed all of it! 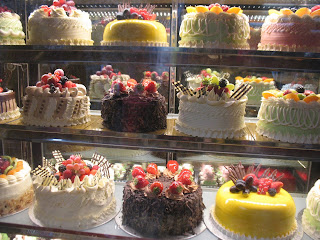