The Abba exhibition at Southbank was an emotional adventure. Since we had spent a year in Stockholm in 1998, we developed a fanatic passion for Abba songs and charisma. The exhibition was organized in ten spaces starting in a dark room with a mirror disco ball hanging from the ceiling and a super trouper (a type of spotlight) on a corner. The song was, of course, ‘Super Trouper’ (1981), its addictive rhythm and revealing lyrics filling the space. We felt like a number one at least for the time the song lasted. 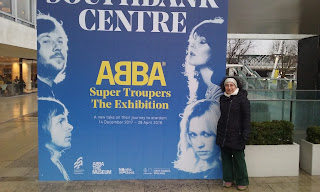 The different rooms showed the stages of Abba’s career from the 70s till the 80s, when they took a’ temporary break’ that hasn’t ended yet. It was interesting to see a dreary living room of the 70s with Beano comics and books on The Well Dressed Woman and The Farm and The Village on the shelves, as well as TV programs on petrol crisis and strikes wildly going on in Britain. Then you turned on the radio and there was pop music, Abba and other singers cheering you up, showing you the brighter side of life, giving you hopes in a better future.

In 1974 they won the  Eurovision contest with ‘Waterloo’, a powerful piece where a big historical event (Napoleon’s defeat at Waterloo) is related to ordinary people’s life, that is surrendering to the loved one, which is a sort of win-win situation, or, as they say, ‘I feel like I win when I lose’. This was the beginning of real success which brought a lot of hard work and money. They became very popular not only in Europe but also in the USA, Canada and Australia. The international tour in 1977 saw people shouting ‘we want Abba’ in Sidney in the heavy rain absolutely captivated by them.
In the recording room I had a go singing ‘Dancing queen’ together with my husband and a group of visitors, it was entertaining and easy, tremendously enjoyable.

In the last room we watched Abba videos, including hilarious parodies and remakes, sitting in comfortable business class airline seats. Back home we played the Abba Gold CD full blast.
What I especially like in their songs, a part from the irresistible music, is the fact that they convey a straightforward message that is mainly centred on relationships (love relationships, as it is typical of pop music), not just looking at the bright side. Their lyrics also connect what seems big and important and bring it back to the ordinary.  Examples are in ‘Waterloo’, as I said before, but also in ‘The Winner Takes it All’, when it says: ‘The gods may throw the dice/their minds as cold as ice’; or in ‘Fernando’, about fighting for liberty in the Mexican revolution; and in the apparently desecrating prayer of the lonely woman: ‘gimme, gimme, gimme a man after midnight’.

At the British Museum we visited ‘Living with Gods’, an engrossing exhibition on how all cultures and civilizations interpret their everyday life through beliefs that go beyond reality, that is the tangible world around us, towards a symbolic, often transcendent, dimension. It is apparently an undeniable characteristic of being human, or, for some of us, it is a need.

In the first room there was an interesting 40,000 year old ivory sculpture of a Lion Man (a man with the head of a lion) found in Germany, probably symbolizing courage, or the spirit of courage.
The captions of the exhibition explained that rituals and myths help people make sense of reality, decrease anxiety and form strong social bonds in the community protecting the individuals. Recurring symbols in most religions are the elements of life: light, water, earth and fire (metaphors of supernatural forces), which imply a transformation in human life. These elements have also a double meaning, they can signify destruction as well as renewal (e.g., water is essential to life and means resurrection, but also causes death). 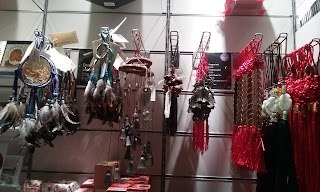 The different rituals are linked to the climatic, geographical and historical circumstances of certain populations. For example, the fire that had to burn constantly in the Zoroastrian temples was a practical way to preserve this important element for the whole community. Furthermore, prayers and meditations help relax, reduce stress and give confidence. This makes it easier to cope with everyday disappointments and sufferings, as life is not only joy and rewards. On the other hand, amulets, pictures and statues are the physical representations of these beliefs, a material equivalent that makes the abstract real. 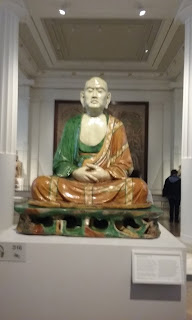 The conclusion seems to be that religion and spirituality are not a surplus but are a well established (and maybe necessary) part of our identities; they are also socially and politically important and exercise power and control on people. The emphasis of the exhibition was on the fact that the different religions are linked to specific cultures, therefore, they are not meant to be absolutely true; tolerance and respect is consequently the main implied message.

At the end there was a display of different ‘religious’ symbols, like the Buddha ( an example of rejection of materialism), communist ceremonies and the cult of personality in China and Soviet Union, the Lampedusa Cross (symbolising different religions coming to Europe), and a seemingly contradictory quote by Albert Einstein: ‘The most beautiful and profound experience is the sensation of the mystical. It is the sower of all true science’.

We also had a quick tour in the new Asian refurbished wing (room 33) starting from the wrong end; it was astonishingly rich of artefacts and full of Chinese tourists, similarly to what we always do heading to the Mediterranean civilization rooms in museums. At the end (or beginning) of room 33 there is an incredible Hindu stone temple. I read in the captions that the name Hinduism was given by the British to the multiple Indian religions that comprehended more than three hundred million deities. A substantial number compared to the one God of the monotheistic religions, which stresses once more the different characteristics from one culture to another. 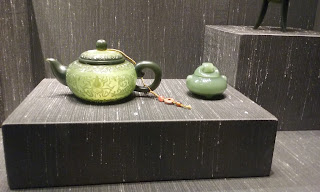 We ended our tour at the British Museum with the temporary free exhibition ‘Violence and Beauty, reflections on the war’. As the few pieces in display showed, combat scenes  are brutal but attractive, they represent power and beauty, humanity and survival. Giving up the fight voluntarily (a sort of conscientious objection) was represented in the Assyrian carved relief dating 645-635 BC; it could mean assured death.

My daughter left for Japan at the beginning of March, so we decided to have a last outing in London before her departure. We went to the V&A to experience the new gorgeous member’s room, where we had an excellent lunch at moderate prices, and browsed in the shop. Then we headed to Tate Modern to see the exhibition of Modigliani. It was extraordinary; I had never seen such an exhaustive display of Modigliani’s art before, most of the pictures coming from private collections. You can read my review of the exhibition here: http://carlascarano.blogspot.co.uk/2018/04/amedeo-modigliani-fusion-of-classic.html

To end the day, my daughter and I had a quick dinner at Capricci, a small but elegant Italian deli just outside the Tate Modern. We were in a hurry (we had to be at Southbank by seven for a concert at the Royal Festival Hall with Nicola Benedetti) and so we had to rush out before dessert. The food was excellent and they have some special products like cantucci with candied orange and extra dark chocolate, or with pistachio and walnuts, and paste di meliga, specialities you can’t find easily in the UK. It was a perfect day.