Canadian recipes with an Italian twist

Inspired by Canadian products, I experimented different recipes both at home and with my mum mixing Canadian ideas and Italian cuisine. We produced cakes and biscuits that my mum shared with friends and neighbours. I also tried some Indigenous recipes twisting them in the Italian way, mainly adding tomatoes. Here are the results of our messing about in the kitchen. 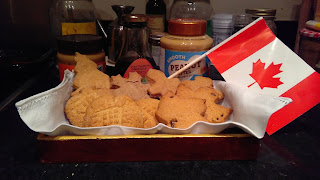 You need: 250 g of flour, 120 g of golden granulated cane sugar, 100 g of ground almonds, three eggs, four tbsp. of canola oil, six tbsp. of soya milk, 50 g of white chocolate chips and 50 g of dark chocolate chips, one and a half tsp of baking powder and a tsp of bicarbonate of soda.
Beat the eggs with the sugar, add the oil and flour, the chocolate chips as well as the rest of the ingredients. The mixture should have a smooth consistency. Grease a doughnut cake tin with the canola oil. Pour the mixture in the tin and bake at 180℃ for forty-five minutes or until it is ready. You can decorate the cake with melted white and dark chocolate pouring it on the top of the cake and adding some gold and silver sprinkles to give it a Christmas feeling. 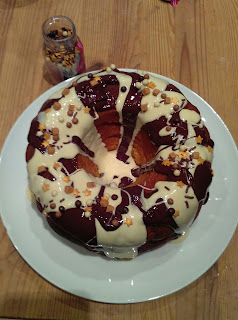 Mix all the ingredients and knead the dough till smooth. Let it rest for half an hour then roll it out and cut the patterns. I used a maple leaf biscuit cutter for the chocolate chips version and a simpler shape for the plain peanut butter ones. Traditional peanut butter biscuits have round shapes that I marked with a fork criss-crossing the patterns. Bake the biscuits at 180℃  for fifteen minutes or until ready.

In Italy I also experimented different versions of these biscuits as I could not find original peanut butter in common supermarkets. Therefore, I used some spreadable products such as pistachio, chestnut or hazelnut spreadables, the result was delicious. 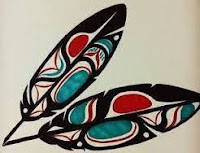 In the struggle to maintain their culture and tradition, Indigenous peoples have always cared for the environment, that is, the life of plants and animals. For the Natives, they are closely connected to the humans. Their legends and the story of the origin of the world reveal a vision that includes both the good and the more problematic parts of people; they think that life embraces cooperation and competition, kindness and aggression at the same time. Their contact with the environment is profound and reveals a great knowledge of the land, plants and animals as well as of the weather conditions and its influence on the world. In the origin, Indigenous peoples were hunters and gatherers and used all the parts of the animals they killed. They harvested wild edible plants like wild rice, fiddleheads and berries. Here are some recipes inspired by their food heritage.
Wild rice
This is a kind of rice Indigenous peoples used to harvest in fresh water, in Turtle Island and lakes. You can use black rice or black and white rice.

For 2-3 people you need: 200 g of rice, two big tomatoes, one pepper, 100 g of mushrooms, broccoli, half of a white onion, thyme, parsley, salt and black pepper.
Cut the pepper, broccoli, tomatoes and mushrooms in pieces. First cook the pepper and the broccoli in a pan with some oil, add the tomatoes and mushrooms and let the vegetables simmer for half an hour. Add hot water if necessary. Add salt, black pepper, thyme and parsley. Cook the rice in salty water, drain it when ready and season the rice with the vegetables.
Three sisters’ soup
This is a soup made with what the Indigenous peoples considered the three sisters: corn, beans and squash. According to the legend they were born from the buried head of the Sky Woman’s daughter who died in childbirth.

You need: two cobs of corns, 100 g of green beans, 200 g of butternut squash, a can of red kidney beans, three big tomatoes, olive oil, a clove of garlic, salt and pepper, macaroni (optional).
Cook the ingredients separately in water. For the kidney beans, add a peeled carrot and half an onion in the water plus salt. In a separate pan pour some olive oil, add a peeled clove of garlic and cook three big tomatoes cut in pieces without seeds, add some salt as well. let the tomatoes simmer for half an hour. Drain the corn, the green beans cut in pieces, the squash in little cubes and add them to the tomato sauce. Add the kidney beans with the water as well (without the carrot and onion). Let the soup simmer for half an hour, then add macaroni if you wish.
Porridge pie with berries
Indigenous peoples used to pick different kinds of berries, especially blueberries. They were a food source and they also believed the berries had medicinal properties. 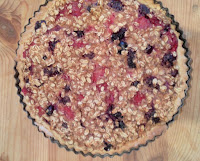 You need: 150 g of strawberries, 150 g blueberries, the juice of half a lemon. For the dough you need: 250 g of self-raising flour, 50 g of melted butter, two eggs, 100 g of sugar. For the porridge mixture you need: 200 g of oat porridge, 100 g of milk plus 100g of water, some maple syrup, one egg.
Prepare the dough mixing all the ingredients and chill it for half an hour. Wash and drain the berries then add the lemon juice and a tbsp. of sugar. Microwave the porridge with milk and water for two minutes. Add the maple syrup and the egg. Roll out the dough and place it on a greased pie tin. Add the berries to the porridge mixture and pour it in the lined tin. Bake for half an hour at 180℃ .
Icelandic biscuits 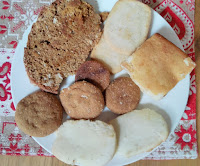 I was at a poetry event at Stephansson House in central Alberta. Pretty blond ladies offered us delicious Icelandic biscuits and lemonade. They also gave us the recipes which I tried at home with some success. Here they are:
Icelandic shortbread
You need: 200g of self-raising flour, 70 g of sugar, one egg, some cardamom seeds or half tsp of ground cardamom, 100 g of melted butter, grated zest and the juice of a lemon.
Mix all the ingredients and knead the dough. Chill it for half an hour then roll it out and cut the biscuits using a biscuit cutter. Bake the biscuits on a greased tray for 15-20 minutes or until they are ready at 180℃.
Ginger bread

Mix all the ingredients and knead the dough. Chill it for half an hour then roll it out and cut the biscuits using a biscuit cutter. Bake the biscuits on a greased tray for 15-20 minutes or until they are ready at 180℃.
Have a go at Christmas, the biscuits are excellent treats to taste with mulled wine and hot chocolate on chilly winter nights.

Have a lovely Christmas time!😍