My high school was a Scientific Lyceum in a posh area of Rome: Amedeo Avogadro was its name. 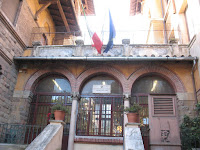 It had two buildings, one in the elegant Quartiere Coppedè (photos attached) with buildings looking like Renaissance villas or small medieval castles. The school had some classrooms, in a tower attached to the main building, surrounded by bare ground. My classrooms were in another edifice not far from it (probably twenty minutes walk), which was instead an ordinary four-storey building adapted into a school. 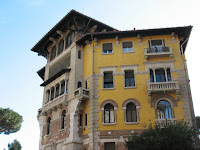 The gate and the walls around it were covered with graffiti and ripped posters. It was 1977, a tough political period when right and left clashed one against the other in school assemblies, rallies and protests. The students attending the classes in the main building (the one with the tower) were notoriously right wing and the others were notoriously left wing. In the middle there were the Catholics of CL (Comunione e Liberazione) campaigning against divorce and abortion.

I was with the left and dressed according to the strict dress code of my side, almost a uniform: jeans (possibly not so clean and not so new), second hand t-shirt and/or pullover, trainers or suede shoes (we called them ‘Clark’) and a small square satchel made in Tolfa. 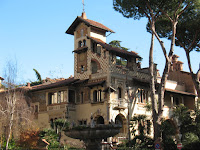 The opposite party wore formal clothes bought in expensive fashionable shops. The girls were usually blond, fresh from the hairdresser, wore make up and had brand new motorcycles. The boys wore sunglasses and had short gelled hair, the polo shirt collar always upright. The whole thing looks funny now, but we all felt serious and deeply committed at the time. I remember two school friends, older than me, a boy and a girl with bushy hair (she was dark, he was blond) who wore the same kind of clothes (blue jeans and blue pullover in winter, and blue jeans and white or blue t-shirt in summer). They were in the same class, always together, and after a few years I knew they managed to work for the same company, maybe even in the same office.

Some of my school friends came back from rallies with black eyes and bruises everywhere. They said they had fought with ‘fascists’. Cigarettes and dope were normally shared. I had my first crush: a short boy with long curly brown hair looking like an 18th century wig, and my first boyfriend I met while we were running away from tear gas and took shelter inside the walls of the university, La Sapienza. He was blond, green-eyed, a year older than me and a physics geek.
My dad drove me to school every morning at first, then I had a bike for my 16th birthday (and I still have it!) so I could cycle to school or, in winter, take a bus. It was a busy, terrible, challenging, wonderful time.
My favourite subjects were philosophy, history, art and history of art and, of course, English. My English teacher was a highly charismatic man, a Sicilian, rather tall, with fairly long, white hair and always smartly dressed. His surname was Craxi (probably a relative of the politician Bettino Craxi). He had a tendency to stray from the topic, getting lost in philosophical soliloquies: the Tristram Shandy syndrome. We enjoyed it because it meant free time, chatting, revising other subjects or minding our own business. He made me love Shakespeare, D.H. Lawrence and the Romantic poets. Although I was in a Scientific Lyceum, maths and physics were not my thing but I managed to pass the exams. My final subjects, apart from maths and Italian which were compulsory, were English and history. And the final results were brilliant!