By chance, I found some russet apples at my local supermarket. They were so especially tasty I thought it was good idea to make pies out of them. Small things were my aim. I prepared a pastry, peeled, chopped and seasoned the apples...and here is the result.
For the pastry you need: 300 g of flour, 50 g of melted butter, one egg, 100 ml of warm milk, 60 g of sugar and half a tsp of baking powder.
For the filling you need: three to four Egremont russet apples, the juice of a lemon, some drops of vanilla essence, a few cloves, half a tsp of cinnamon and one tbsp of sugar.
Prepare the apples, peel and cut into half inch cubes, season them with the lemon juice, cinnamon, vanilla drops, one tbsp of sugar and two to three cloves (which you will remove eventually). Let them rest for half an hour. 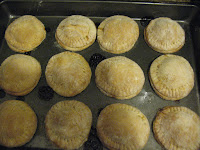 Make the pastry mixing flour, sugar, egg and butter in a bowl then all the other ingredients. Roll the dough out. Cut circles of about three inches in diameter (I used poached egg rings). Put some of the apple pieces in the middle of one circle of pastry and cover it with another ring. Press the edges using the tips of a fork and set it on a greased oven tray. Carry on till you finish the pastry and the apple pieces. Bake for half an hour at 150° C. When cool sprinkle with icing sugar and serve with whipped cream. 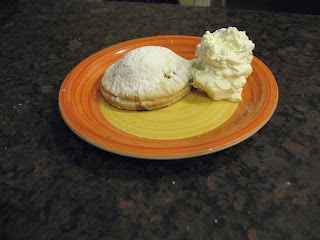