My father, who was a doctor before retiring, wanted me to follow his in his footsteps. But I soon realized it wasn’t for me (I fainted every time I saw blood) and opted for something which didn’t involve flesh, bones and jabs. Books were all right. I loved them. As I was so good in English, had attended English courses and had been in England a few times, I chose English literature.
At the time (the 80s) the university of Rome, La Sapienza, had no computers or any electronic data base.  Everything was on paper. To enrol (or for enquiries or to collect certificates) there were long queues at the university offices where you had to hand in the enrolment forms, various certificates and the receipts of the uni fees you had to pay previously at the post office. An ordeal. A kind of natural selection. If you survived this you were in, and you could take from four to twenty years or more to end your four-year course, provided that you paid the fees every year (which were, and are, pretty low compared to the English fees). 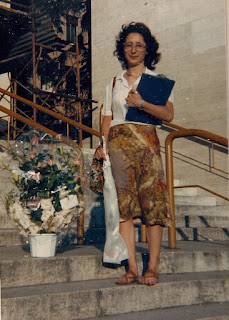 I remember fighting to keep my place in the queue which stretched along the uni paths, up the stairs to the office and finally into a large room where several lines queued up in front of their respective hatches. As soon as you were inside you had to dash to the right queue heading to the right hatch (which changed often, some of them dealing with enrolment in alphabetical order, others with degree forms or otherwise) and wait for your turn. Once you were face to face with the clerk you had a few minutes to deliver your requests, hand in your forms and certificates (which he duly stamped and collected), grab the precious handwritten receipt and leave, while thinking: ‘God forbid they lose my file in their immense archives’.
Every exam was recorded on paper as well. The professors had to write the name of the exam on a card called ‘libretto’ (small book), write the mark and sign it. I kept it as a memento for a long time after my degree. You were in big trouble if you lost it.
Most of the exams in Italian universities are oral exams, a gut-churning chat with the professor and/or an assistant. Just before an exam, high adrenaline levels and sudden fears of becoming speechless were common feelings.
In term time we had to attend lectures (once or twice a week for each exam) and take notes, of course. Then read and analyse or learn several books. During the oral, your fate was decided in fifteen to thirty minutes, something similar to job interviews in the UK. It was scary. I survived and finally did very well, but the moment of the ‘interview’ was a little trauma every time. My dad told me once that he still had nightmares about some of his exams after more than twenty years.
In my university years I concentrated completely on reading and studying, spending hours and hours in libraries, attending lectures and seminars. It was all so engrossing and profoundly engaging that I almost gave up any kind of social life. I had a few friends, though, and went to a uni skiing resort in the Alps near Trento every year, where I could meet fellow students from universities all over Italy. But my main focus was definitely on my studies.
Literature lectures were the most interesting ones. English was my favourite subject, of course. The professors in the English department were varied and very different one from the other. The one I remember best, whose lectures I attended for three of my four-year course, was a short lady with short brown hair and a famous surname who always wore trendy outfits. She smoked like a chimney even during lectures (no smoking ban at the time). Her courses were mainly on Shakespeare’s work and though she hadn’t published important books yet, her lectures were stimulating, almost a revelation to me.
What she did was not only analyse the works, explain the critics’ opinions and interpretations, underline the style, etc., but she also made the work alive by linking it to life, life in Shakespeare’s time and today. This is a lesson I’ve never forgotten. Literature is not only beautiful, unique in style and original images, it also teaches you how to live and what to expect from life. Being young and almost inexperienced, this intrigued me tremendously. And this is particularly, though not solely, true of Shakespeare.
My final dissertation was on the images of Venice in The Merchant of Venice and in Othello. It took me a while to complete it but I enjoyed every moment. I hadn’t any computer so I typed it on my dad’s old Olivetti. Every draft was corrected by the professor with a pencil and I had to re-type the whole thing every time making sure I inserted the footnotes on each page. A never ending, massive task which I carried on by myself, with no help whatsoever. It's unthinkable today, when you just correct the file saved on your computer and print it again.
The final dissertation was not just marked. You had to discuss it with your and other professors during a proper exam (an interview again) where they questioned you in both Italian and English. According to your answers and considering also the average from your other exams, your final grade was decided. Chilling. But this was the last thing (there were no graduation ceremonies). You waited outside for a while, went in again, they told you the mark, you thanked them, shook hands and went to celebrate with friends and family. I believe it is still more or less the same procedure today.
Once I got my degree, I decided it was time to look for a job. I started with private lessons, then a few poorly-paid hours in private schools and supply teaching in state schools. Finally I had a stable job in two private secondary schools teaching English and English literature.
In the meantime I didn’t quit university completely. I realized I could enrol in another course to get another degree. I chose Italian literature and went straight into Dante and Italian philology. I couldn’t attend all the lectures this time and having a job slowed down my exam performance. Nevertheless I attained my degree at the end, which became very useful afterwards.


All in all it was a superlative experience, which not only gave me two degrees and the opportunity to teach both English and Italian but also widened my mind and gave me a great boost in life.
Posted by http://carlascarano.blogspot.co.uk/ at 06:42