In Italy Shrove Tuesday (Martedì Grasso, literally ‘Fat Tuesday’) is the apex and the end of a long festival called Carnival. The Carnival has two important days: the last Thursday (Giovedì Grasso, Fat Thursday) and Shrove Tuesday, the last day of Carnival before Ash Wednesday when Lent begins.

It starts in January, a fortnight after the Christmas holidays, and is great fun for children.  We usually celebrate it by having fancy-dress parties, playing jokes and eating special cakes.

At school, children learn the legend of Arlecchino, Harlequin, whose poor mother sewed him a fancy-dress costume for Carnival with scraps of materials of different colours because she couldn’t afford a proper costume.  Probably the real origin of Harlequin’s costume isn't so far from the legend.  A good example of the Italian ability to get by. 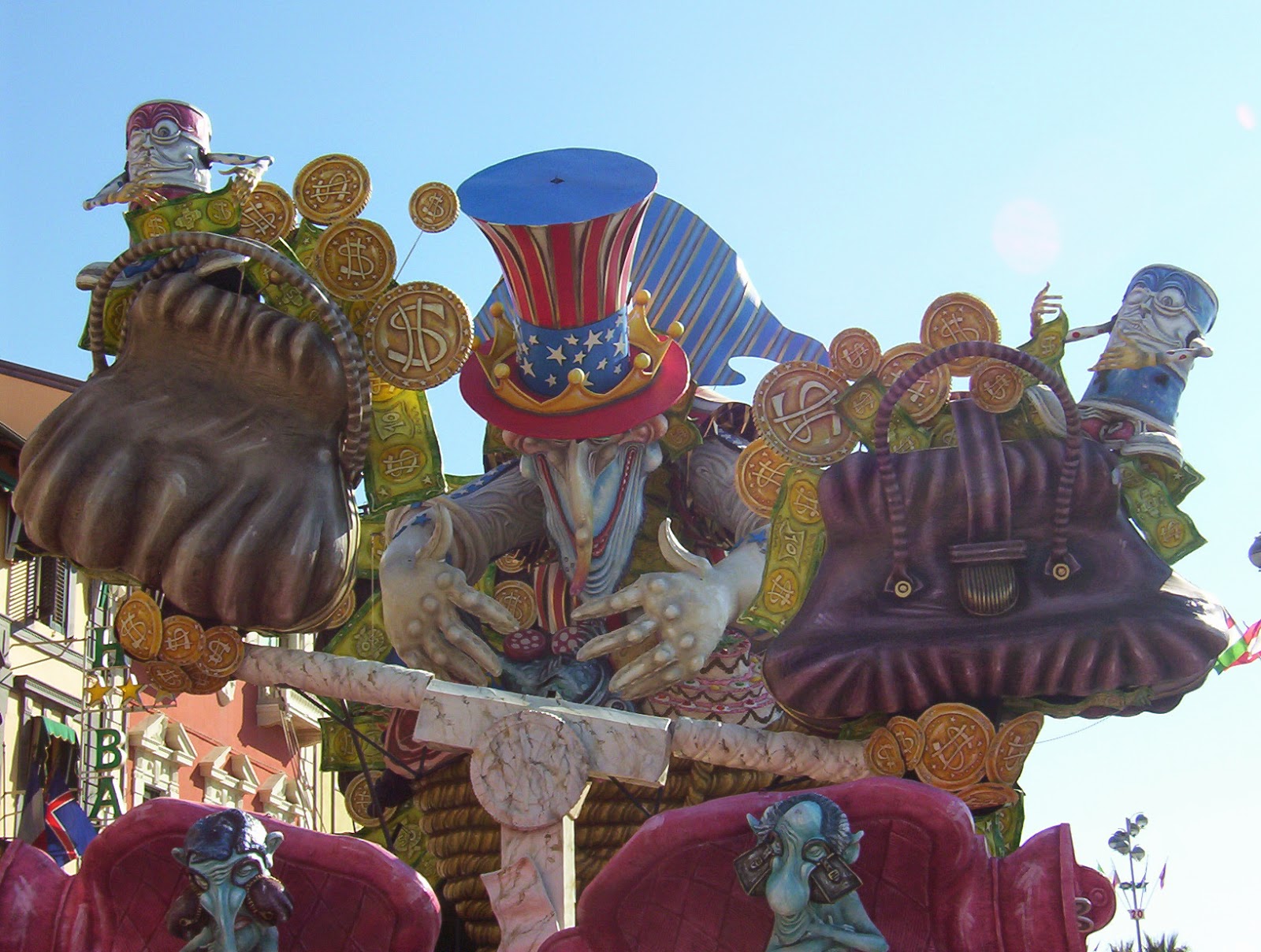 When I was a child at Primary School my mother thought that I shouldn’t have worn the common girlish fancy-dress costumes.  Most girls of my class dressed up as Pinocchio’s Fairy Godmother, Fata Turchina, with long, deep blue, ruffled dresses, a wig of deep blue hair and a magic wand with a silver star I desperately wanted.  My best friend used to wear a long, cream coloured  dress hemmed with purple velvet and a wide brimmed straw hat with a pink ribbon and flowers.  She looked like a princess.

Instead, my fancy-dress costume was a lighter version of the uniforms of the Horse Guards on Whitehall, except for the boots.  I wore a red tunic with long sleeves and golden stripes on the front, thick white stockings and a short white tutu.  The worst part was the hat, heavy and tall with crest and visor.  And I had to hold a stick as well.  My mother had decorated it with coloured sellotape. People often asked me what the name of the costume was.  “Mace-bearer,” my mum used to reply proudly.

As soon as I collected enough money, supplied by my grandmother, I asked for a new Carnival costume.  Entering the shop I discovered the costume of my dreams, on a model of my size.  It was a long dress of pale brown organza overprinted  with red and blue flower patterns, and a straw hat.  The shop assistant told us the dress was inspired by Rossella O’Hara’s character.  I didn’t know who she was but I craved it.  I wore it for many years till I stopped dressing up for Carnival when I started secondary school. 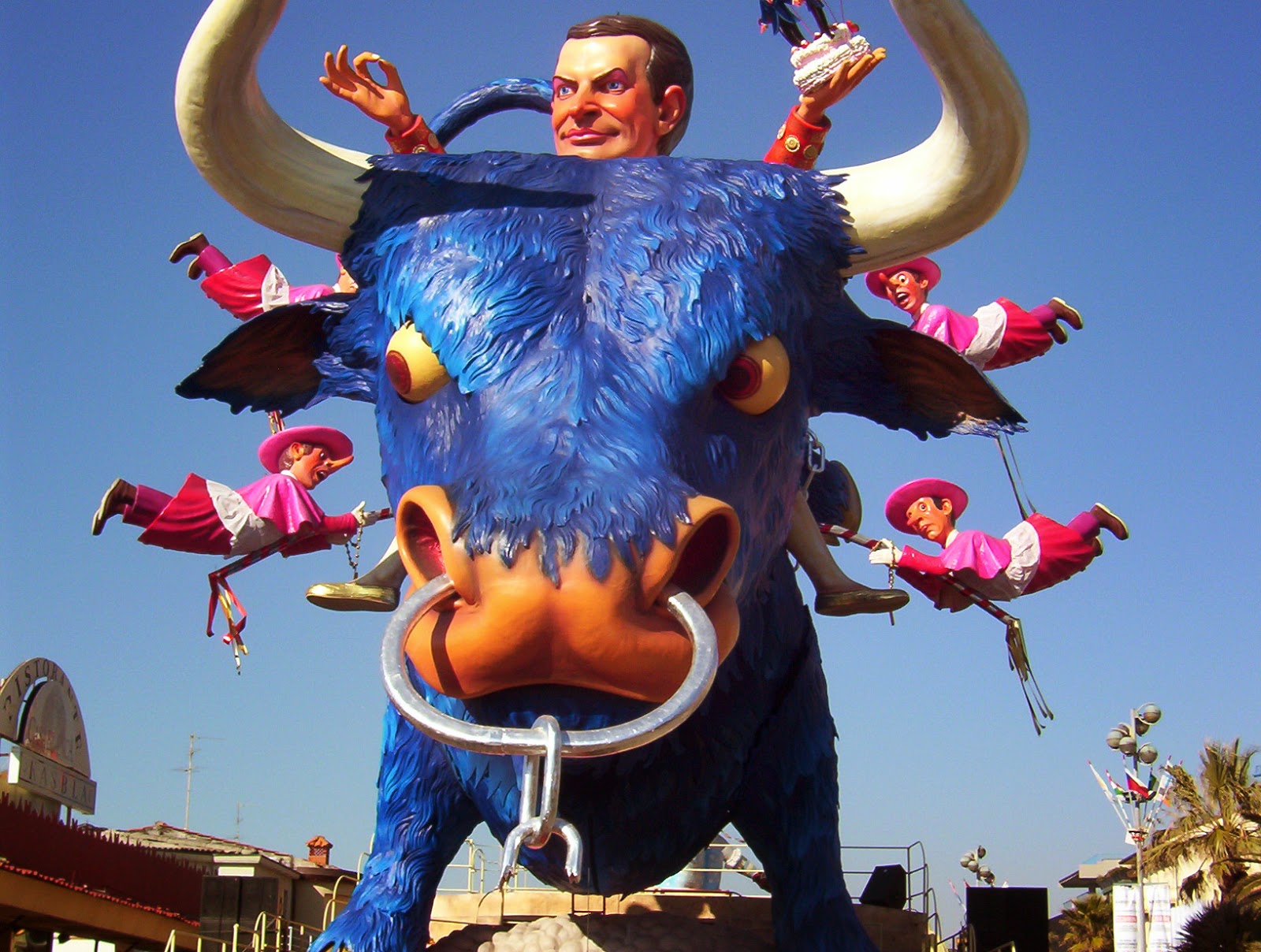 Later in life I had great fun in preparing my children for Carnival with the practical help of my mother in law, who is a skilful tailor. The children showed her the picture of the costume of their dreams in a magazine and she made exactly the same model.  My contribution would be the accessories, a paper hat, a helmet or a mask. Great times.

We do not have pancake races on Shrove Tuesday but we have parades of floats. The most famous one is in Viareggio, a posh place on the Tuscany coast. Details are on www.viareggio.ilcarnevale.com/lingue_eng.php
In 2006 I was there with my family.  Apart from the risk of being trodden on by the crowd, or run over by the floats, it was impressive.  The floats were around sixty feet tall with moving platforms and gigantic papier-maché figures waving and rotating.  Some figures on the floats were inspired by the social and political climate, showing the sharp-witted point of view typical of Tuscany people.  I remember a float with a greedy man wearing a top hat with stars and stripes keeping a basket full of food and bags of money all for himself.  Another one  had José Luis Rodrìguez Zapatero riding a raging bull and holding a wedding cake with two male figurines on it. Cardinals were attacking the bull with spears.  Huge, scary, hooded figures strode around. Their cloaks were made of banknotes and they held the strings of puppets representing politicians.

Loud music, coriandoli (tiny pieces of paper we throw to each other), stelle filanti (strips of coloured paper) and rubber spaghetti kept our spirits high and made us forget all the wrongs of the world.  And this is exactly the spirit of Carnival, a carefree time just before Lent begins. 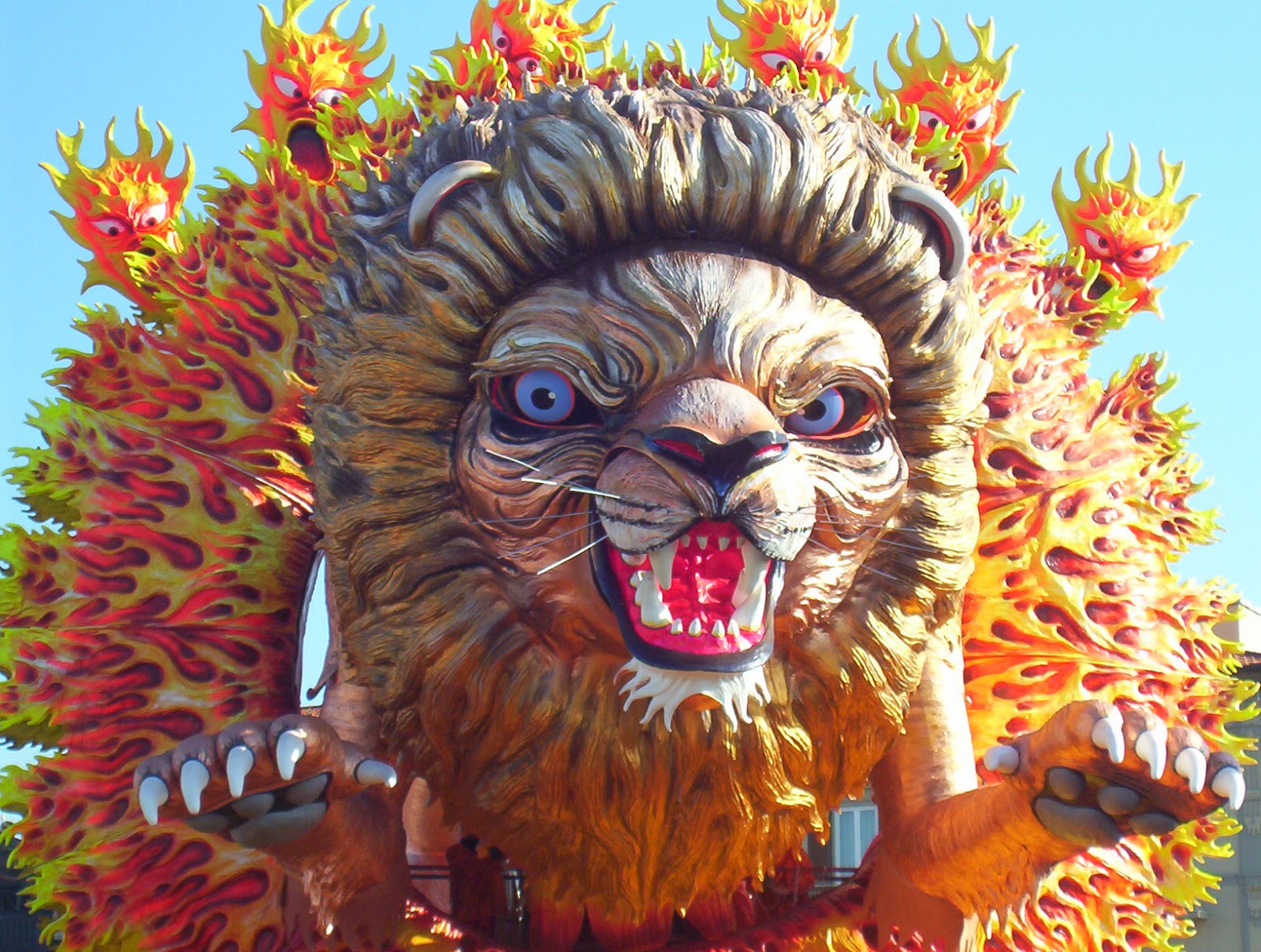 It is always good time for eating in Italy when there is a festival.  And there is always a lot to celebrate.

Two typical treats of Carnival time are frappe and castagnole.  Frappe are thin sheets of pastry fried and sprinkled with icing sugar.  Castagnole are balls of pastry a bit smaller than Swedish meatballs, fried and covered with granulated sugar or honey.

Mix all the ingredients, knead the dough and let it rest for half an hour.  Roll it out and spread melted butter on the sheet of dough and fold it.  Do it again and again, three times in all using about 30 g of butter.  Finally roll out a thin sheet (you can use a pasta machine) and cut it in strips about four inches long and from one to two inches wide using a pastry wheel cutter.  Fry them in a pan with abundant hot oil.  Let them dry a bit on kitchen roll paper then sprinkle with icing sugar.

Mix all the ingredients, knead the dough and make the balls.  Fry them in a small pot half full of hot oil.  When they come up and start to turn brown they are ready.  Toss in sugar or pour honey over them.

Have a nice Carnival party!