Shopping with my daughter, December 2009

Christmas also means shopping:- before, during and afterwards. I was in Rome with my family during the Christmas holidays. My teenage daughter had received about two hundred euros for presents from relatives. She was looking forward to spending them on a few things. Clothes, shoes and accessories were her favourites at the time.

She had a day out with her friends at a huge shopping centre in the northern part of the capital where she bought her outfit for the New Year’s Eve party. I checked it at home: very short sequinned black shorts and sleeveless black and white top. She promised to wear thick black tights under the shorts and a black jacket she had brought from England. 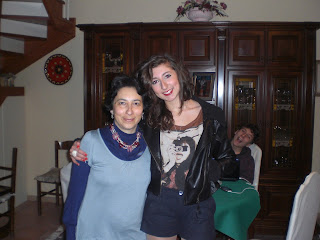 What about shoes? She had only high heeled shoes and I thought flat black ones would be better with such a stunning outfit. We arranged to buy some cheap ones the following day when I had to take her to meet her friends in the centre of Rome. I hoped to keep the expenses low (following the TV suggestion that everybody could have a trendy New Year’s Eve outfit for less than fifty euros) and buy a pair of shoes she could use at school as well.

But the following day it was pouring. We had already set off when  her friends sent her a text,  dumping her. We made up our minds to go shopping all the same, took the bus and had forty minutes' underground ride to the centre.

I was impressed by the new underground trains, comfortable and spotless. A captivating male voice informed us about the next station and which side of the train to leave from. Voiceless videos advertised eco-friendly messages about using a bicycle, giving some of your stationary to poor African children and writing your name on paper cups at parties. Amazing. Was I in Rome, Italy? Travelling from a shabby suburb to the ancient and equally shabby centre of the eternal city?

I had time to look at the passengers. A few tourists from Germany and from southern Italy, some Chinese people, South Americans and a lady with a plastic bag printed with Cyrillic letters. Two Romany children with an accordion got on and played a nostalgic gypsy song. I dropped a euro in the paper cornet the little girl held. She wished me a Happy New Year.

We got off at Lepanto station, near via Cola di Rienzo, our destination. My daughter knew about an American fashion shop called Brandy (probably everybody else knows about it but I did not). It seemed she couldn’t care less about Italian fashion this time. She did not remember where the shop was exactly and we walked up and down the street in the rain for a while. Finally I caught a signpost with “Brandy” printed pale grey on white.

A narrow entrance led us to a basement crammed with clothes. I closed and left our soaking telescopic umbrellas in a corner and  went down. It was just my daughter's style: tight vests and wide jumpers, mini skirts and “cool” pictures and messages printed on the front of thin T-shirts. We wandered about, squeezing between tables with chequered shirts, pastel jumpers and gauze skirts and baskets full of scarves and hats left there as if by chance. Mannequin torsos were on the floor and on shelves, dressed with several layers of  stuff, e.g. a vest, a jumper and a loose bib and brace.

A few other girls with their mothers were also crowding the little cellar rooms. After half an hour of fruitless searching my daughter found the very pieces she was looking for: a grey vest, ideal for winter time, and two jumpers, a white one with Marilyn Monroe’s photos and a grey one with Beverly Hills School printed on the front. Not too expensive either. No shoes, only boots at Brandy’s this season.

While she was trying her things I waited outside the fitting rooms with the other mothers. I noticed they carried, with nonchalance, Gherardini and Gucci bags and I heard them speak with a posh accent to their daughters, their language full of bellino and carino. Where had my daughter brought me? The Snooty Girls' Den? At her age I wore only second hand clothes which I used to buy at Porta Portese Sunday market.

I realized they were glancing at us, puzzled by our strange manners and outfits, though we spoke perfect Italian. We were acceptable but they couldn’t grasp where our clothes, shoes and bags came from. My daughter’s slightly military double-breasted orange jacket, a low-slung little black bag, weird hair cut and above all a sort of self-confident, easy manner, different from her Italian peers.

And my bag was impossible to identify. They couldn’t spot my social status and political tendencies from it. I squeezed it under my arm, aware I was under observation. I had bought it in Lancaster two months before and was so proud of it because it matched with every colour.

Time to pay. While I was fumbling with my English debit card, hoping the Italian machine would accept it, my husband called. Were we going back for lunch? It was half past twelve. Yes we were. My daughter did not want to miss any of her grandmother’s cooking. How long would we take to come back home? I had to enter the pin number of my card so I passed the phone to my daughter, muttering, “About half an hour by Underground.”

We weren’t even at the station yet. She said half an hour.

Going out I found our umbrellas in a basket with a dozen similar ones. I grabbed two dark ones and we went back into the rain.

Now the cheap flat black shoes. Hard to find in via Cola di Rienzo where the lowest price was a hundred and fifty euros. No way! She could stay in stockinged feet:- the party was at one of her friends’ houses, and all girls.

To find the cheapest shoes I had the brilliant idea of stopping at a station along the underground line near via Tuscolana. Looking at my umbrella I realized I had swapped my previous dark blue one for a black one. They looked the same in the sombre entrance of Brandy’s (mind, when you can’t find your umbrella among a hundred ones in a basket and think somebody stole it, take it easy: choose another one). I thought it wasn’t a big deal as they were both the two-for-three-pounds kind.

After a long search for the model and size (size eight, forty in Italy, is not so common) we spotted H&M, dashed into the shop and found the exact pair of shoes we were looking for, in two slightly different models (with a tiny buckle or a lace), black, size eight, fourteen euros  ninety-five. Great, we did it.

We went out full of bags and umbrellas. I called my husband. He could pick us up easily there in fifteen minutes. It was a quarter to two.

An annoyed voice answered on the other side. He hadn’t had lunch, he said, as they were all waiting for us to come back. We had said half an hour.

“Next time we’ll stay out,” I said to my daughter. Learn from experience.