My grandmothers: an example for life
I often think about my grandmothers, with admiration for what they have achieved and endured in their lives and with boundless affection. I go back to how they were, what kind of lives they have had and how similar or different I feel from them.
They both had strong characters and strange, old fashioned names: Conforta, born in November 1903, my mum’s mother, and Orsola, born in February 1896, my dad’s mother. Though they came from different social backgrounds both spoke dialect all their lives, could barely read or write, dressed in a similar way and cooked similar food.
This might be because in Italy there has never been much money to go round and wealthy people were a small minority, especially at that time. Most people had only a few sets of clothes and two pairs of shoes, one for every day and one for Sundays and they ate meat only once a week. Education was not compulsory after Primary School. During holidays, if you had any, you could play in the town park or see relatives in the village where you came from.
Conforta came from a family of farmers from Cortona, near Arezzo in Tuscany, and moved to Rome when she was twenty to work as a maidservant in a middle class family. She wanted to be more independent and the work at the farm was too hard for her. 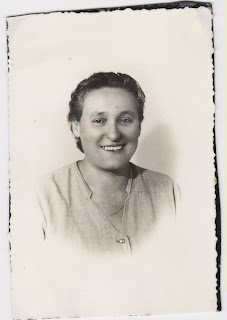 She was tall and strong with big hands and big feet, mild brown eyes and long fair hair she used to braid and fix in a coil on the back of her neck according to the country girls’ style.
In Rome she met my grandfather, a short sinewy Sicilian man with dark curled hair and light grey eyes and the pretentious name of Napoleone. She fell in love straightaway … and got pregnant. It happens. They married in a hurry keeping the secret though her sister in law, who made the bride dress, complained that she had to let it out at each fitting. My mother was their first child, born in May 1930.
After my mother my grandma had another child and she had to work hard too, much harder than she would have thought in her worst nightmare. My grandpa was a hard worker as well, he woke up at four in the morning and came back home at night. He was a butcher’s boy and also carried meat with his tuc-tuc. But he had ‘holes in his hands’, as we say in Italy, and spent most of his money with friends and women. So Conforta had to earn enough money to feed and dress her children and pay the rent of the hut where they lived in the outskirts of Rome. It was countryside at the time and there was no running water, no gas and no toilet. Afterwards they moved into an apartment in a working class district of Rome, San Lorenzo, famous for being bombed-out in 1943. 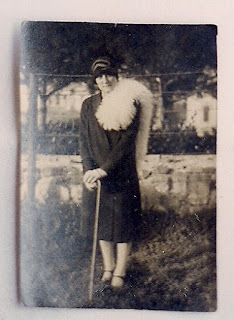 Working hard became the faith of my grandma’s life and her only way to survive. She had been maidservant, gardener, seamstress and washerwoman. She never had a holiday. Once she cut up her blue velvet coat to make skirts for her daughters while she used to wear cheap, thin dresses because she couldn’t afford more.
She had seven children. The fifth one , a boy,  died of gastroenteritis when he was a baby. In 1936 there were a few medications available and my grandparents couldn’t afford any anyway. She put the blame on herself because she couldn’t breast-feed him as she had no milk. Or maybe this was what people maliciously whispered behind her back. She had a breakdown and attempted suicide by throwing herself in the oven where she was baking the bread. My mother was only six and had three younger siblings to look after while my grandma slowly recovered.
During the war they spent a year in the farm near Cortona where their relatives lived. They could relax a bit there and enjoy the countryside but they had to earn their living all the same reaping, sowing, collecting and selling bundles of sticks.
Grandma was also a very clean person. My mother told me that they had to scrub and polish every inch and corner of the house when it was cleaning day. When I was a child she taught me to wash and iron and she was particularly keen to show me how to use elbow grease to attain the best result.
I remember her still working in the laundry of a private hospital in Rome when she was about seventy, her tall figure slightly bent, her white hair short and tidy, her hands deformed by arthritis fumbling with the iron roller.
Five of her six children married and she had fourteen grandchildren. We all used to meet at her house for Christmas and Easter. Finally she had managed to buy a two-room apartment by paying a mortgage. It was a plain, ordinary home with a few photos on the walls and a huge table in the living room with heavy dark oak chairs around it, engraved with wreaths of fruit and flowers.
During the festivities, everybody was involved in the cooking or setting the table and serving food. She prepared delicious meals with homemade gnocchi, ravioli and lasagne, juicy roast beefs and crisp lamb ribs. In the afternoon she called her grandchildren one by one and gave us a bit of pocket money each from her meagre pension.
My grandfather, six years older than her, suffering from dementia, went around the house with his walking stick and hit us, the children, on the legs or tried to trip us up. His sharp profile was unchanged, his hard eyes staring at us while we played hide and seek or hopscotch.
In 1971 my grandma’s youngest son, aged 28, unmarried, died in a motorbike accident. It was his fault, he did not stop at a crossroad and exceeded the speed limit. He was flung in the air like a puppet and banged his head when he fell down. He was not wearing a helmet. I was playing with my cousins in my aunt’s garden when she arrived supported by her daughters. She was crying, delirious, totally devastated. In spite of all her care and hard work she could not save him.
She attended Mass regularly but never talked of God or religion. She kept her feelings to herself. Her way of speaking was frank and witty, typical of Tuscany people, her words in dialect as pointed as a dart right on target.
When I came to England for the first time, aged seventeen, and worked as washer-up and maid in a restaurant in London for a month she came to fetch me at Termini railway station in Rome, extremely proud of what I had done.
In 1982 she died of kidney cancer. She spent the last few months in our house where my mother looked after her. She couldn’t speak any more and was lying on a bed most of the time, her big bones sticking out under her pale skin, her white hair long and loose, looking unreal like the hair of a doll.
My other grandmother, Orsola, was from Meta di Sorrento, a village on the coast of the Gulf of Naples. She came from a family of carpenters and shopkeepers and was the only daughter with six brothers. Her mother died when she was six years old and she had to help a lot at home, though her father remarried shortly afterwards. 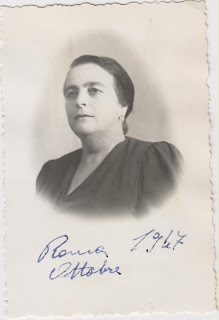 She was a short, chubby woman, the typical shape of a southern Italian. She had thick black eyebrows and dark clever eyes, still twinkling in her portraits and photos. She had worn long hair all her life and used to keep it loose at night and tied in a bun during the day. It was a mistake to be misled by her plump cheeks and round figure. Under it there was an iron will.
Four of her six brothers were sailors and died on the sea in shipwrecks or of fevers. The only two who survived till old age were the ones who found a job in the village.
Her father did not want her to marry because they needed her at home. But she met my grandfather and it was love at first sight. He was tall and elegant in his uniform of Guardia di Finanza with a fair, toothbrush moustache and a big nose. He was bit of a "head in the clouds" kind of man, a real challenge for a woman like her.
She used to call him ‘Ciccillo’, the affectionate nickname for Francesco in Naples area. Guardia di Finanza (Financial Police) is a sort of Army in Italy that deals with custom and financial matters. He was from L’Aquila in Abruzzo and came from an aristocratic background but he was not wealthy. His father died when he was eight years old and he joined Guardia di Finanza when he was sixteen. He was a lieutenant when he married Orsola, a kind, extremely well mannered man with a big heart. He did not fine or jail cigarette smugglers in Naples because he knew they were poor families who had no other way to earn their living. He had a stable wage even during the war and my grandma knew how to thrive on it. 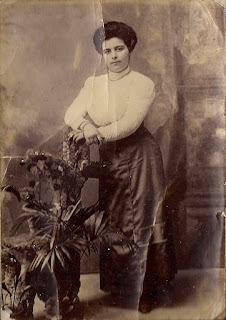