Chocolate eggs, pastiera and the Jewish Passover.
Easter school holidays are very short in Italy, a week and sometimes only five days. The weather is usually awful and changes to glorious spring or even summer after Easter, when everybody is back to work.
So what is Easter about?  Meeting family and friends and having big dinners together of course! In my childhood we used to meet our large family at my grandmother’s, my mum’s mum.  She made gnocchi or ravioli with spinach and ricotta for thirty people.  For second course we had Abbacchio, roasted lamb, and for dessert Colomba, an Easter cake with almonds with the shape of a dove.  For children there were chocolate eggs with little gifts inside.  I did not like chocolate so much at the time and I was always disappointed by the gift.  Luckily I had the chance to swap it with my cousins, which was the most exciting part of the day.  Sometimes I was so clever that I ended the day with a bright plastic bracelet or a fake ring instead of footballer cards or silly badges.
In my childhood my parents did not care about religious celebrations.  The only person who went to Mass in the family was my grandmother, my dad’s mum, who lived with us.  My parents considered her religious attendance obsessive and her practice of keeping pictures of saints in her bedroom near a little lamp superstitious. So I did not know what Easter really meant till my adulthood when I chose to see what was all this fuss about Jesus Christ dying on a cross and rising on the third day.
What my grandmother left me of Easter time was the ritual of preparing Pastiera, a delicious and not so easy Easter cake typical of Naples area.  There are different types of Pastiera and the recipes vary, but there are two main ingredients which should always be there: wheat grains cooked in milk and ricotta.  It is shaped like a pie, pastry on the bottom, then the filling, with crossed strips of pastry on the top. The secret is in the filling.
We used to make it a week before Easter.  My grandmother supervised the work and prepared the dough while I and my sister mixed the different ingredients of the filling. She had a secret recipe for it and she always said that that was the real Pastiera.  Other ways of making it were tainted by modern views. 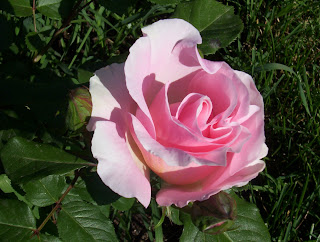 Preparing the filling just right was the climax of the preparation.  It had to have a special taste: mellow, but with a touch of cinnamon and the balanced flavour of ricotta and wheat grains. My grandmother tasted it dipping her fingertip in the mixture and savouring it for a few seconds. Then she bid us to add this or that ingredient with her usual commander-in-chief tone. I still have the taste in my mouth each time I prepare it so I can adjust the ingredients making it near to my grandma’s recipe. Unfortunately my children don’t like Pastiera so it is not as much fun to make it now.
Easter Night Mass is the most evocative liturgical event of the year. The fire outside the church, the priest entering the church with the big Paschal candle and all the people lighting their own candles from it give me a shiver each time.  It may be the chilly wind that regularly blows at Easter night both in Italy and in England.   Or it may be ancestral emotions triggered by the strong symbolic meaning of the fire lighting up darkness.
Once I went to a Jewish Passover dinner organized by a catholic priest.  The idea was to celebrate the Passover as Exodus 12 says: ‘You shall have your belt fastened, your sandals on your feet and your staff in your hand, and you must eat in urgent haste.’
We were five people plus the priest.  There was a tiny roasted lamb leg in the middle of the table, some salad, unleavened bread and a sort of jam made with honey and nuts.  Each one of us had also a crystal goblet.
Five bottles of wine appeared on the table.   With twinkling eyes the priest explained us that the dinner had a strict procedure. Four times we had to stand up, he made a speech and we answered.   Each toast entailed drinking the content of the goblet filled to the brim with sparkling red wine.
There wasn’t much to eat and the wine was strong.  Towards the middle of the celebration we were all giggling and chatting at random about keeping your feet fastened and the belt in your hands.  We weren’t in much haste.  We staggered out of the room at about midnight and had a good night's sleep, but weren't feeling so good in the morning.
About ten years ago I celebrated Easter in Sweden.  My husband was working in Stockholm so we had moved there.  I used to attend some pre-school sessions with different groups of mothers and children during the week, taking my third son who was two at the time and did not attend school yet.  One of the sessions was in the community centre of a Lutheran church where we had some arts and crafts sessions, storytelling and sharing food.  Before Easter we decorated bare twigs and branches with coloured feathers and little plastic eggs.  It was still winter weather in Stockholm.  The trees had no buds and there were no flowers around.
Once, the leader of the group, a chubby, unusually dark haired lady with pale blue eyes, invited us to a short meeting about Jesus' Passion. We went in the church and she showed us scenes of the different moments of the Passion displayed on a table.   Like an Italian Christmas Crib there were little figurines representing the Last Supper, the Flagellation, the Crucifixion and the Resurrection.  She also showed and explained us the items of the Passion like bread and wine, the crown of thorns and the oils.  It was engrossing.  I tried to create the different scenes when I was in Italy using plasticine but I had little success.
Beside eating Pastiera, another must for our family in Easter time is watching Jesus Christ Superstar for the twenty-third time.  It refreshes our memory and for the children it is less boring than reading the Gospel.
Well, after Easter everything is new and we should feel more energetic, ready for the summer rush.