Shopping with my husband.
I don’t know why men don’t like buying clothes. It is an unfathomable issue handed on from generation to generation.
My mother had to beg my father to buy new shirts and new trousers because the ones he had were worn out.  When he put on weight and his old clothes did not fit him anymore he used to blame my mum saying she used the wrong washing program and his clothes had shrunk.
My husband doesn’t blame me, but I now have to persuade him to buy something new after I filled a bag for Cancer Research with his threadbare shirts and shapeless, faded trousers.
Also my two boys are reluctant to buy new clothes while my two daughters and I would dive into any new dresses and accessories.
Last weekend was the ideal day to go shopping with my husband.  The children were all busy with friends and Valentina was at Respite Care.  He had only one surviving pair of jeans to wear at weekends and on holidays and was running out of shirts as well.
We had planned it a week earlier and there we were in a large M&S menswear department full of the fresh, bright colours of summer time.
I bade him to choose some shirts or I couldn’t guarantee a clean one every morning he went to work.  Besides, June being so nicely hot this year he desperately needed short sleeved shirts.
Obedient, he lazily picked up some shirts.  I suggested four more.  He doesn’t like chequered shirts but there were a few thin striped ones with pink and lilac shades which suited his complexion. I said nothing, so that I would not seem pushy or pedantic (as I am sometimes, like all good wives).  I waited till he ended his tour among the shirt shelves.
Then as in a trance he turned his attention towards the ties section.  Ties are the only things he really craves to buy.  I have never given him a tie as a present because our tastes are completely different.  He loves bright, strongly patterned kinds where I prefer pastel shades and soft motifs.  I ought to choose ones I hated to make a good present.  The whole thing must mean something deep about our secret trends and unconscious desires. 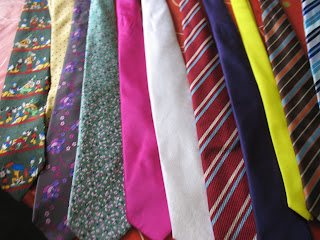 There was a vast choice of ties at M&S.  From the Luxury Woven and Made in Italy to the Collezione inspired by Italy.  But they were too expensive, even though the label was made with recycled paper.
He reluctantly moved to the machine washable ones, 7 pairs for £5 or a 2-pack for £ 9.50.  He chose an electric blue striped one, a pink one, a purple-red-violet one, and finally a green and yellow diamond-patterned one.  It was a hard choice because he liked many more.
We moved to the jeans and polo shirts area.  After a few visits to the fitting rooms he found the right pair of jeans and the right size polo shirt.
It was time to go, to have a bit of fresh air and walk in the sun.  There was still time for the last pleasure: two Ultimate Woven silk ties with the stain guard finish, which he had spotted since we had arrived.  They were a bit more expensive than the previous ones but they were worth it: a pink and purple one with patterns of flowers and another pink one with relief green and purple dots. Pink in all its shades was the colour of the day.
We paid and walked out of the store hand in hand.